Stand back. For I have found the most impossibly romantic olive grove. It is at Villa Adriana near Tivoli, which is relatively close to Rome. Adriana is the expanse of ruins that are somewhat quaintly described as Hadrian’s Villa. At about a square kilometre in area, it would be a mistake to think of it as Hadrian’s country retreat. It is more akin to an estate that was likely on the scale of a town. It is an enormous site where there is still much archaeological excavation to take place. On the day we visited, the temperature was in the mid thirties, the place was nearly deserted and there was not a breath of wind.

Unless you are a scholar, there are only so many ancient Roman ruins that enthral and only so many times one can ooh and aah over the wildflowers growing amongst the tumbled stones before shade and a cool beer start calling. But then we came across the olive grove.

I use olive oil; I eat olives; I can even enjoy dipping a tasty bread finger into a bowl of high quality, single origin fresh olive oil. But I have not been convinced about the romance of the olive grove before. The vast olive plantations of Spain I had seen were industrial production. 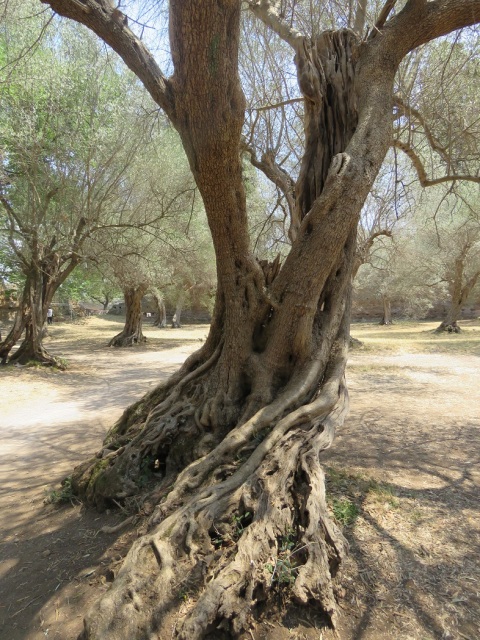 I was once told by somebody overstepping all personal boundaries that I lacked any romance in my soul. This was because I had described the mass vineyards of sauvignon blanc in Marlborough as being industrial horticulture. When my critic looked at them, I am pretty sure he saw the quaint little family vineyards of Italy whereas I saw hectares of tanalised timber and corporate investment. That searing dismissal of my finer feelings came back to mind as Mark and I wandered the Adriana olive grove. I just wanted to photograph every tree. Here was romance and antiquity in its original form.

I have no idea if it is still managed as a commercial operation but the lack of olive stones beneath would suggest that the crop is gathered. These were venerable trees clinging tenaciously to life down the centuries. I did a quick net search and found that at least some of the Adriana trees have been given monumental status.

“A monumental olive trees has an aesthetic destination, since production efficiency is undermined due to the elevated costs to maintain them. Often, producers will use these secular trees as emblems of an olive oil produced from younger plants of the same variety. “These plants are icons of a territory, a heritage, a tradition, a culture,”

As I read that quote, I think it must have been translated from Italian but it captures the flavour. It continues:

“An interesting fact about dating monumental olive trees is the difficulty in calculating the age because the inner part of the origin area tends to disappear due to diseases over the centuries. The wood keeps growing laterally but is internally hollow, often making it impossible to calculate the exact age, leaving scientists to estimate using available data.”

From the Olive Oil Times. 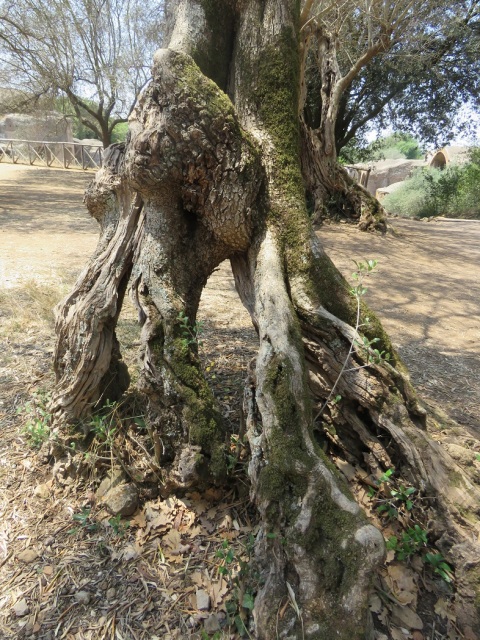 The age of some of these Adriana olives has, apparently, been calculated at around 660 years. So they don’t date back to Hadrian, just to the fourteenth century. And the hollow centres are a typical feature.

At least the monumental status may protect these trees from the ignominy of being dug up and shipped over to Britain for sale with a huge price tag. Instant maturity for English gardeners wanting to pretend that they are living in Italy at £1700 for a relatively young plant of a mere 70 years.

Lacking the rose tinted glasses of the former colleague who thought the vineyards of Marlborough were “romantic”, it is going to take a lot to convince me that the recent olive plantations of New Zealand are anything but utility until those trees are nearing a century of age at least.

9 thoughts on “The unexpected romance of an olive grove”