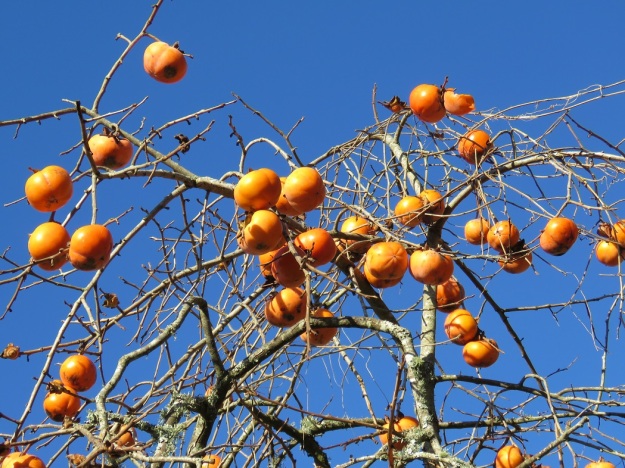 Our autumn days are not always like this. We have had a week of dreary, grey and cold weather interspersed with rain every day. It can be very dispiriting. But it is more common for us to have days like today’s glorious morning when the persimmons make a colourful sight. The intensity of light and colour we get all year round here is something we take for granted, in the main. It is not until I travel overseas that I realise this is not common in many other climates.

The persimmons are the old fashioned, astringent variety which need to be very soft and ripe to eat. I have a couple of trays ripening. This year I want to try mashing the flesh and semi-drying it as fruit leather to use in baking. Persimmons make a reasonable substitute for dried apricots. The birds are enjoying the majority of the crop which is still on the tree. 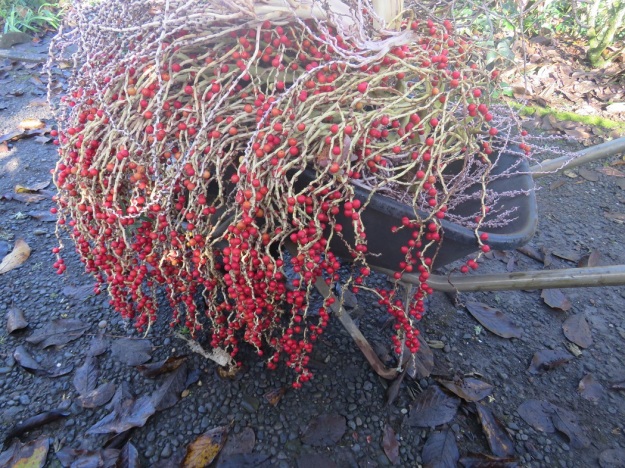 A barrow full of bangalow seed

I have written before about the invasive habits of the bangalow palm, Archontophoenix cunninghamiana, and why we think it should be on the banned list for commercial sale. Because ours are handsome plants, Mark has been loathe to get the chainsaw out to drop them but he does get the extension ladder out to cut off the seed. Behold a barrow full of seed, though Mark observes that many more fell off and are lying at the bottom of the trunk. The problem with the seed is that the birds spread it and it can out-compete our native nikau palm (Rhopalostylis sapida). I do wonder at what point Mark may reach for the chainsaw rather than the extension ladder, because allowing such prolific seed-set on plants we know are invasive is unacceptable in our personal gardening philosophy.

Bulding an extension to the banana frame, using giant bamboo

Protecting one of several bunches. We are currently eating our own, homegrown bananas

The extension ladder was also required for the covering of the bananas for winter. “I had to build an extension to the frame,” Mark said and that was no small task. The bananas are the one and only plant we cover for winter and with the best ever crop of ripening bananas, this was even more important this year. Being 5km from the coast as the crow flies, we are not quite frost free here. Most tender plants can cope with the occasional minor frost as long as we place them carefully, but the bananas are marginal at best and warrant the special attention if we want the crop.

As our maunga – or Mount Taranaki to non-NZ residents – has put her full winter raiment on this week, it was a close-run race between the covering of the bananas and the first cold snap of winter. Not that we have had a frost yet.

The ladybirds have moved inside to hibernate. They creep into the crevices of the upstairs wooden joinery which can make opening and shutting the windows challenging. I was fine with this annual event until a social media friend suggested that they looked to be the pest Harlequin ladybird which is a far grubbier and less desirable version of the charming, common ladybird. I suspect she is right, though the first reported incidence of the Harlequin ladybirds was up north in 2016 and we have had these hibernating critters for longer than that. So either they have been in the country longer than has been reported, or we have some other form of this beetle. I see there are 6000 different types of ladybirds so unravelling the different ones is beyond me. They are a bit messy, so I may flick them back out the windows with the duster.

Propping up the Ficus antiarus 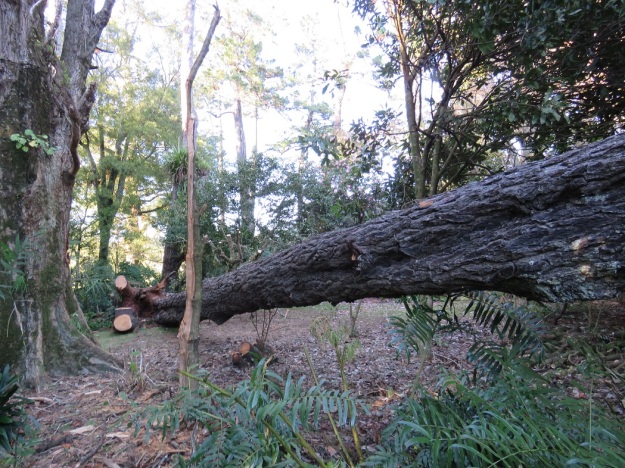 I see it was April 11 when we had the last major treemageddon incident.  Our Lloyd – our incredibly obliging and handy man here – did a fantastic job to get the clean-up to this stage. The poor Ficus antiarus is but a shadow of its former self after being completely uprooted. It remains to be seen how tough it is in longer term survival. The 140 years of straight Pinus radiata trunk may be destined for firewood after all. We have been unable to find anybody with a chainsaw mill who could mill it on site for us. The poor stripped remnant of a plant to the left of the trunk in the second photo is, or maybe was, a fruiting macadamia tree.

Mark is now looking in askance at the splendid specimen of Abies procera ‘Glauca’, a magnificent tree that he is worrying may be a ticking time bomb here. We are usually philosophical about large trees that fall but that is because their location means they will fall without damaging power lines, drainage pipes or buildings. The abies, alas, is more likely to fall on our house and cause major damage. He is wondering if it is time for us to make the hard call and fell it in a safe direction. Every time he mentions this, he expresses regret that his father planted it so close to the house. But that is so often the story with big trees – most people never factor in their potential size as they reach maturity. 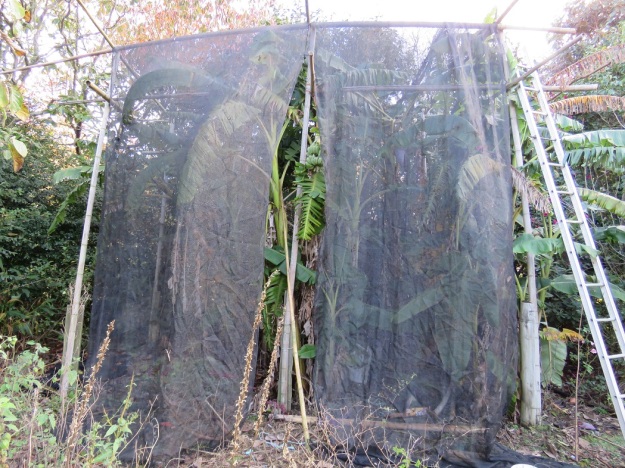 The Theatre of the Banana, as I describe the protection of the only plant we wrap for winter

8 thoughts on “A Week in the Garden of Jury”