In a city far, far away. Well. four hours’ drive away, to be precise

Kurtz’s final words in Heart of Darkness, by Joseph Conrad.

I use these words flippantly and facetiously. I studied the works of Joseph Conrad back – way, way back – when I did Honours in English Literature and the topic of my dissertation was three of his works, including Heart of Darkness. But I found myself muttering ‘the horror! The horror!’ when I beheld this exercise in section maintenance this week.

I only share it with readers because I took these photos in a city four hours drive from here and do not think the people responsible will ever read my gardening pages on line. I would not want to hurt their feelings because they have at least tried. Occasionally, a sight such as this reminds me of just how much I have learned about gardens and design in my life. 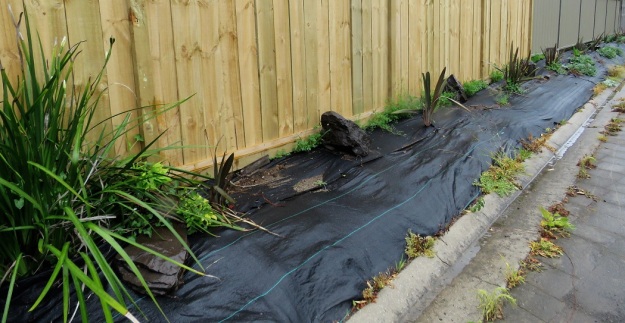 Starting with the public frontage (or maybe sideage), we have the sight of weed mat. I am sure I have railed against weed mat in domestic situations before. It is a commercial product for a commercial application – plant nurseries – and it has zero aesthetic appeal. All that can be said for it is that it is marginally better than the earlier habit of laying heavy duty black plastic which soured the soil over time. Weed mat is permeable so it allows moisture through. The soil beneath will compact over time, but it won’t become dead soil, bereft of all microbial and insect activity. It possibly has some application to use as a weed barrier that is then covered (entirely, please, entirely so that none is in view) with some pebble or lime chip but that means it can only be used on a flat surface. What could they have done? It was a rough slope so unsuitable for grass. I would be wanting to stain the fence dark and maybe plant the area solidly in something like mondo grass, perhaps with some marguerite daisies to bring pleasure to passers-by.

It was the borders inside that made me smile. They were recently planted and into heavy soil. One of this and one of that, randomly distributed. A lavender, a gerbera, a bromeliad, a patio rose, a cineraria, a kale, a paper daisy, a polyanthus and much, much more. In singles, bar the five clivias. I immediately conjured up the mental vision of this couple heading to the garden centre, determined to plant up the beds. They must have wheeled at least two trolleys around, loading up with one of everything which had flowers on it on the day. There were a lot of plants and I don’t imagine it was cheap at all. A garden centre owner’s delight. This is, by the way, a rental property and let me at least give credit that the enthusiastic landlords were attempting to make the outdoors attractive. 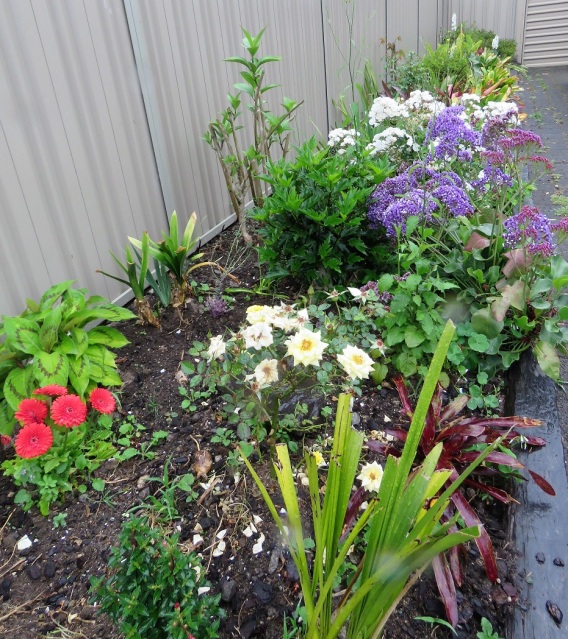 If I still had a paid gig writing for the print media, I would be heading out with my camera to find some of the best examples of low maintenance, outdoor planting and design for non-gardeners that I could find. But I don’t, so that idea was short-lived.

At least the bees and butterflies will enjoy these garden beds for the short time that they will bloom, before they become a mess. And it would be worse if the beds were all covered in visible weed mat.