I circled the man in the tree. I don’t think I would stand on that branch but these trained arborists know what they are doing.

We had the arborist back in last week. Two of them, in fact because our usual arborist has teamed up with another so there were two skilled people on the job. This is just as well because we only call them in to do major jobs. On this occasion, it involved three trees but the one I photographed because I thought it was most interesting was a fairly large ficus – a fig tree but not a fruiting one. Mark estimates it was about thirty years old and growing at a great rate. Not only was it in the wrong position but it was of neither interest nor merit. When it dropped a large branch recently, we realised it was also brittle.

Dropping it was a skilled job because it had to be dismantled, not felled in one go. With the road on one side and a densely planted garden on three sides, how the pieces came down was of considerable importance to us. It took the arborists about six hours to fell the tree and clear up. 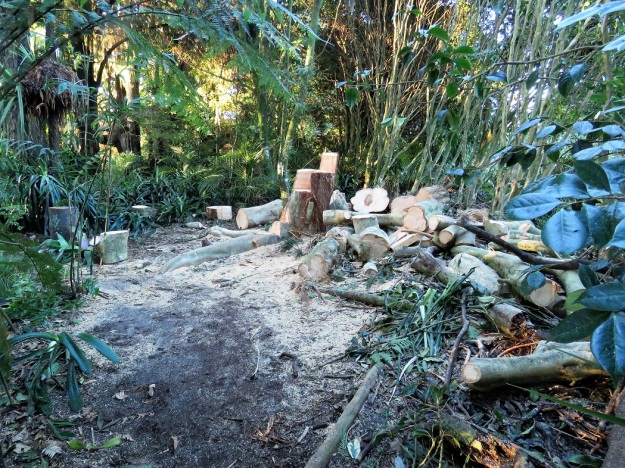 The amount of tramped, bare space was a bit daunting at first glance

This was how the scene looked at the end of the arborists’ work. They mulch all the leafy material and remove it and cut the bigger lengths up. Fortunately, they had dug out most of the plants that were in the area – mostly clivias and bromeliads – and the only damage was to a dracophyllum which is now somewhat smaller than it was. In a moment of whimsy, one of them shaped the remaining trunk into a throne, though only designed for those with small derrières and the gluey sap oozing from it was a problem, as Mark found when he tried. Mark described the area as looking somewhat like a state highway, given the amount of bare, tramped space. 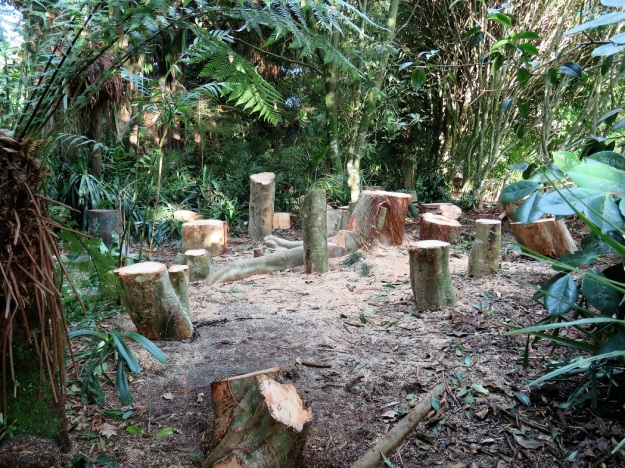 Not so much a trendy insect hotel, Mark quipped, as an entire insect resort

Because the timber was very soft and sappy, it had no use for firewood or garden edging, or anything else. It seemed best to let it break down at its own speed in situ. I asked Lloyd to stand up the longer lengths and rounds and to stow the small material out of sight at the back. He also removed the throne shaping. Not our style and we didn’t want to encourage any garden visitors to tramp across the garden to try it out.

Then I moved in, replanting what had been dug out and rustling up other suitable material to fill it all up. Ferns, clivias, chain cactus, bromeliads, three small growing palms from the collection Mark still has ‘out the back’, some liriope and I can not recall what else. This area is mixed and informal and is one of the best examples of a stable matrix planting we have. By matrix planting, I mean one where the selected plants co-exist happily over time (measured in decades, not months or a year or two), requiring remarkably little maintenance or intervention. It is also bio-diverse because of the range of plant material used, the depth of natural leaf litter and because most of the spent material is kept on location, not removed. 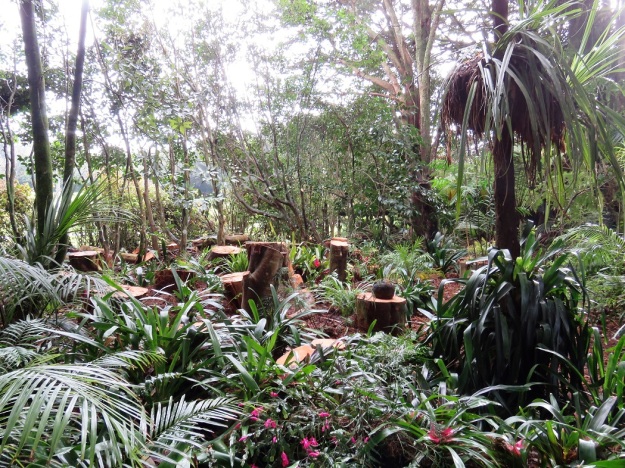 To finish off the reinstatement of the area, I moved in large amounts of leaf litter as mulch. With high overhead trees, the whole area has considerable depth of mature leaf litter and I was able to skim it off from adjacent spaces to get what I wanted. There is no bare earth left visible.

The cut edges on the trunks need to mellow. The plants need to bed down and put on fresh growth. It does not look as densely planted as the surrounding areas. But it doesn’t look raw and new and I am pleased. The two factors that made the biggest difference to the appearance are the natural mulch and using plants that were a variety of different sizes and maturity. If you buy plants from a garden centre, they are a uniform grade. Freshly planted, they will look like plants you bought from a garden centre.  If you can cast around and rustle up plants to hand, the look is far more natural and that is the effect we want.

The whole exercise took about four days from the arborists arriving to reach this final point.

The pile of woodchip mulch has grown further. It is clearly generating some heat on this frosty morning. It represents a handy resource, even if we don’t want to use fresh woodchip mulch everywhere in the garden.

5 thoughts on “After the arborist”