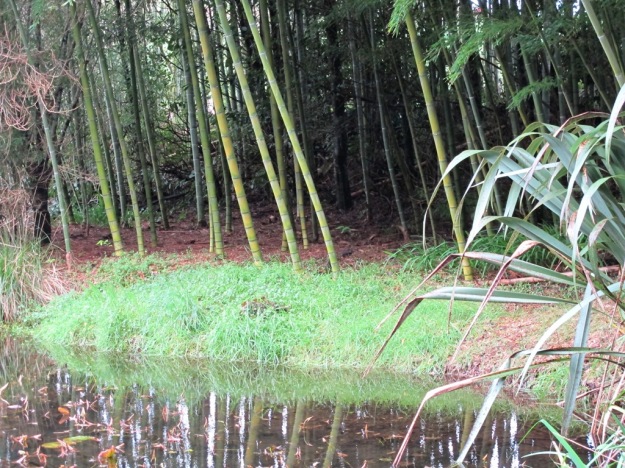 We have the odd stand of bamboo around the place. This giant form is Phyllostachys edulis.

There are no fewer than 42 different species that giant pandas eat. Mark told me that P. edulis is one of them so I briefly entertained the cargo cult dream – grow the food and wait for them to arrive – but sadly that seems unlikely. A net search does not highlight P. edulis as one of the pandas’ preferred species so maybe that is the problem? We have
tried harvesting the young shoots to eat and they were fine, if n

ot sufficiently inspiring to ensure that they became a dietary staple. It is, however, a useful source of very long and remarkably stable poles. One is a prop for the washing line. Mark uses it to build shelter frames for his bananas and even to make super long handles for the rake he uses to clean out our ponds. Inspired by our awe of bamboo scaffolding in Hong Kong, seen on high-rise buildings, he threatens to construct our own scaffolding but I think it is all talk. 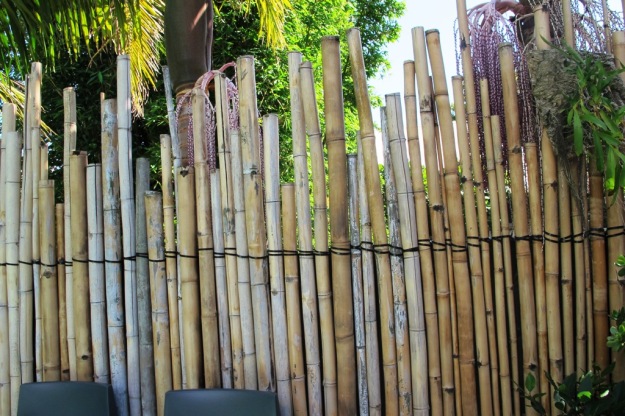 I photographed this bamboo screen in a Herne Bay garden during the recent Heroic Gardens Festival. It was a lovely small town garden which successfully utilised pretty much every bit of available space to integrate the indoors and outdoors as living space. I really liked the informality of the screen, with the varied lengths of bamboo rather than forcing them into uniformity and the natural weathering process. Mark was particularly taken by the close-up photo showing how the lengths were held in place. Cable ties – a wonderfully simple idea.

Also seen at Heroic was this crafted bamboo gate in a Mount Eden garden, which was beautifully executed and appropriate to the restrained, immaculately maintained sub-tropical back garden. This is located in the heart of a densely populated urban area but the garden gives no hint of that. The gate has clearly been coated, presumably both to prolong its life but also to stop the weathering process and preserve the smart, new appearance. Sealing the bamboo will also stop the growth of lichens. 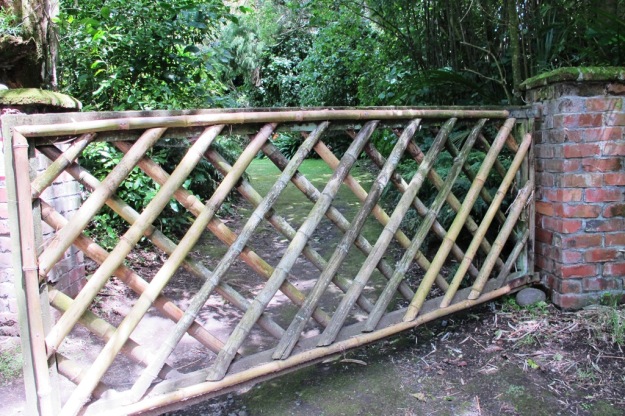 At the other end of the sophistication scale, I photographed these two bamboo gates in an Okato garden last spring. These have been added on to existing gate frames in a garden where many different bamboos are grown, and then left to weather over many years. You can see the high humidity environment and clean atmosphere in our coastal Taranaki that encourages such abundant lichen growth. As long as the bamboo is kept off the ground, it can last a surprisingly long time.

The best bamboo collection we know is at Paloma, Clive and Nicki Higgie’s garden at Fordell, near Whanganui. Bamboo enthusiasts will find much of interest there. But no panda bears, alas.