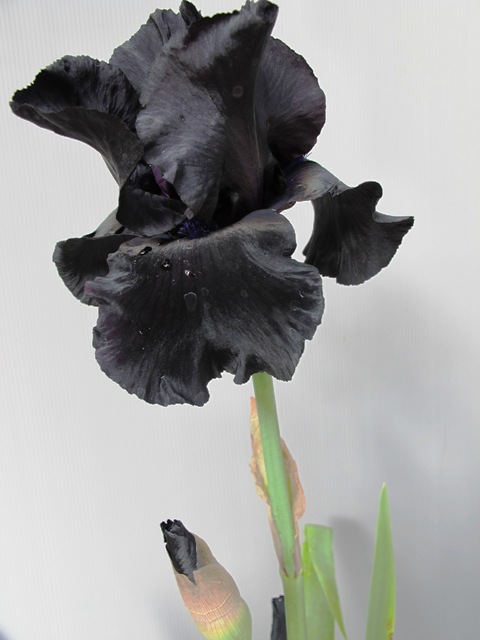 In last week’s column, I included a photo of the black iris called “Anvil of Darkness”. This week it is the turn of the larger “Black Suited” to bloom and for wow factor, it sure has what it takes as a specimen bloom. It opened pure black but both these dark, velvety irises take on very deep purple tints as they age. These are novelty blooms in that black flowers are rare in nature and Mark is a bit suspicious of how well they stand out in the garden. I had been wondering about combining it with some white Siberian irises I have which flower at more or less the same time but he felt that was too obvious and it would look better surrounded by soft pastel colours, probably perennials rather than more irises.

Both these black irises were the work of an American breeder, Sterling Innerst, who was actually a primary school teacher who liked to breed irises in his leisure. He named 213 different new hybrids before his death in 2010 and I guess we might be grateful that the handsome “Black Suited” was not in fact named “Erotic Touch” or “Grobswitched” as two others were. “Black Suited” was first released in 2000 and any debt to original species is a fair way back in the past. He was crossing hybrids so it is a cross of “Before the Storm” with “Black Tie Affair”. The flower spike stands about 50cm.

I wondered whether breeding black irises was a recognised breeding quest but I see that the iris equivalent of the blue rose is in fact a pure red. It has yet to be attained.