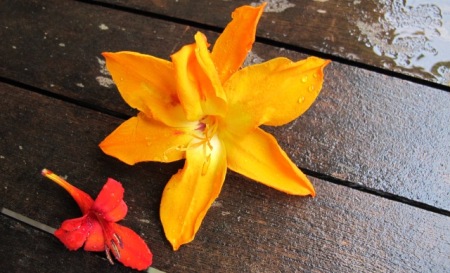 Latest posts: Friday 27 January, 2012
1) No amount of wishful thinking can alter the fact that we do not in fact have a Mediterranean climate here and romantic recreations of the glam of Med holidays are likely doomed to disaster. Abbie’s column.
2) A big, beautiful, fragrant rhododendron flowering in mid to late January? R. diaprepes in Plant Collector this week (but don’t expect to find this one offered for sale at your local plant store).
3) Grow it Yourself – broccoli. Personally I prefer not to. I have tried repeatedly over many years to learn to love broccoli and have met with dismal failure but others are more enthusiastic and it is fearfully good for you.
4) The latest instalment of our fortnightly garden diary as published first in the Weekend Gardener – dealing with prickly onehunga weed without resorting to lawn sprays and other garden matters. 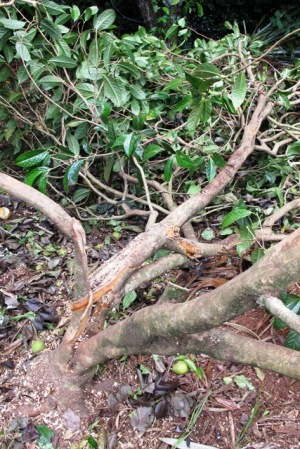 The sad state of Camellia chyrsantha

It was only last year that I featured one of the best flowerings we have had on Camellia chyrsantha (it of the butter yellow flowers – bright New Zealand butter at that). It only took a decade or two to start performing well. Alas, it came off second best to the rapid descent of a massive old pear tree last week. The trouble is that it is a grafted plant and the trunk has been split. We are hoping it may still recover and live to bloom again. We can take the long view and wait another decade, if need be.

I have been photographing the different bulbs flowering this month. We were worried we had lost the yellow-orange form of crocosmia but it has leapt into flower and is remarkably showy with very large blooms. The red form (the one above is a hybrid called Lucifer) is such a strong grower that the chances of losing it are negligible, which means we take it completely for granted. Indeed, red crocosmia is a widespread roadside flower regarded as an invasive weed and known as montbretia in our area. The pink vallota is also looking particularly fetching. I would describe it more as peach than pink. There appears to be some debate about whether it is a vallota or a cyrtanthus so the pink vallota may in fact be the peach cyrtanthus. The auratum lilies are still fattening buds and not yet in full stride – just some tasters open so far. 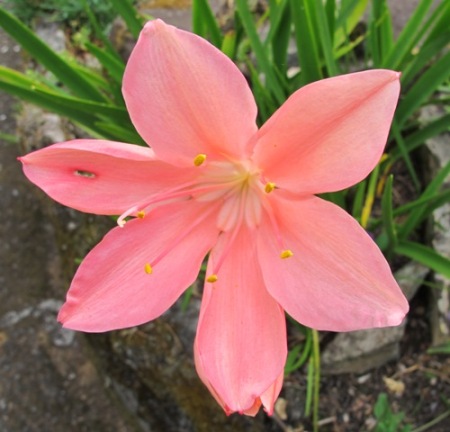 The pink vallota. Or should that be the peach cyrtanthus?