I am really not a fan of canna lilies. We only have one in our garden, which I assume is Canna Tropicana but I don’t love it enough to give it a prized position in order to star. I find them a bit coarse, lacking any element of refinement. And they don’t die down gracefully at the end of the season. There are many other plants we prefer that we can use for the tropical look in our climate. 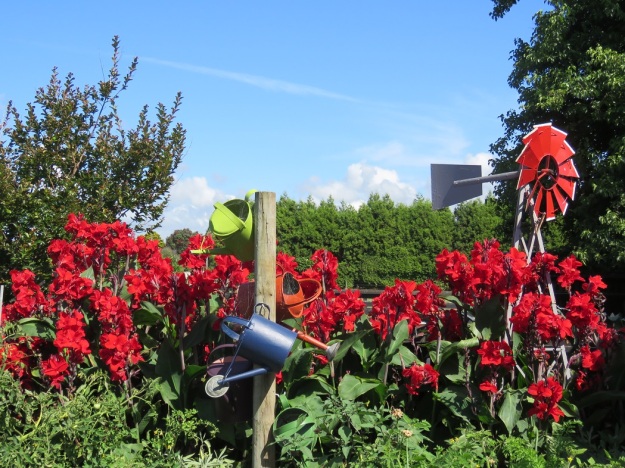 But the fact that I don’t want to grow them myself does not stop me from seeing their merits elsewhere. Down the road, so to speak – as in maybe 5km and a couple of road changes down the road – is a fine patch of red cannas that I admired all last summer each time I passed. They are very… bold. And undeniably cheerful. When passing in a car, they are bright enough to catch my eye every time and they do appear to have a long season in flower. Pat, who owns these, offered me some when I stopped to photograph them yesterday, but I declined. I get my pleasure from looking at them in her garden.

If you are going to grow them, my advice would be to plant them in blocks of a single colour for maximum effect. I did not realise until I looked them up to get their species name that they are edible. My cursory study of them indicated that it is the tubers you eat, not the flowers. They are Canna indica, not lilies at all, but that is probably no surprise. Their widespread natural habitat takes in large parts of South and Central America, stretching up into the southern states of USA.

Cannas are a mainstay of the summer plantings at the Te Henui cemetery. Mercifully, Cemetery Sue who leads the team of volunteers who tend those gardens, has kept the colours separate.

Auckland Regional Botanic Gardens also uses big plantings of cannas in their summer herbaceous displays. Some of these are better than others. The symphony in pink was, I thought, charming on the day. The garish stripes in primary colours, not so much. 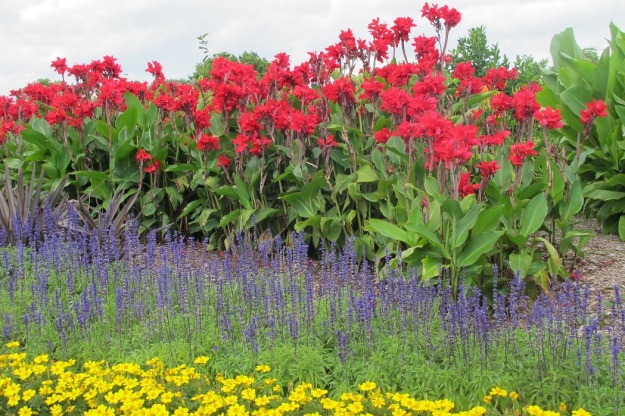