The early spring bulbs are over and we are now into mid-season. We garden with many, many bulbs and probably find them a great deal more fascinating than most who are less enthusiastic. I could wow a few readers with the Phaedranassa cinerea or maybe the Cyrtanthus falcatus in bloom now, but to the casual eye, a simple planting of bluebells and Narcissus bulbocodium naturalised around the base of an old eucalyptus tree is likely to be far more charming. That eucalyptus dates back to around the 1870s when Mark’s great grandfather planted several around the property. They are messy trees because they shed bark and small twiggy growth all year but look at that interesting twist in the trunk that some varieties develop with age. 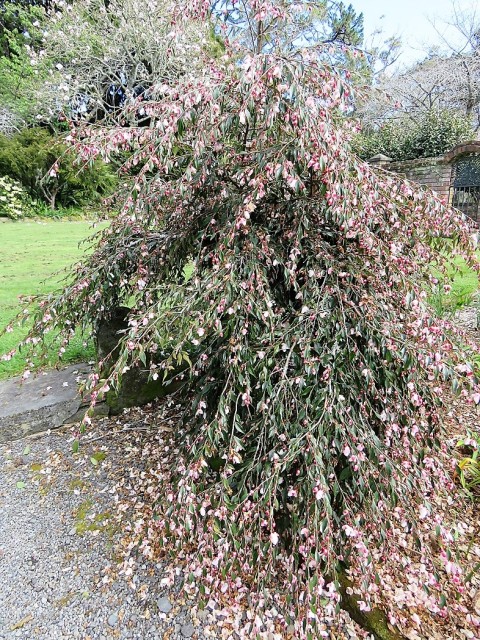 The flowers are delightful and abundant but small – C. minutiflora again

I do a lot of flower and garden photography although I would only describe myself as a gardener and writer who takes photographs, not a photographer as such. And some flowers are really difficult to photograph. I feel I have got to grips with magnolia images but making a series of flower shots of some genus can be particularly challenging. It is mighty hard to make a whole lot of full trussed rhododendrons, japonica camellias or hybrid tea roses look interesting rather than a series of blobs. More on rhododendrons later in the season. But so too is it difficult to capture some of the smaller flowered shrubs, conveying their charm. I have taken many photographs of the dainty camellia species, C. minutiflora, and they remain a dismal failure in capturing the simple visual delight to the naked eye. It is such a delightful plant that we have used it in a number of places through the garden. In the end, I decided I just had to pick a few sprays and lay them on a plain background to try and show just how sweet this little camellia is when you can see the detail. 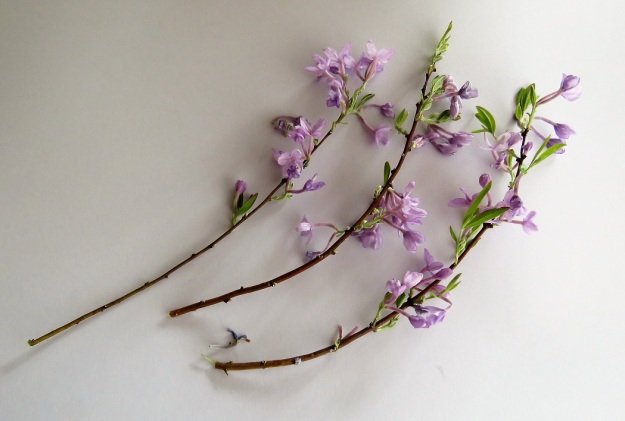 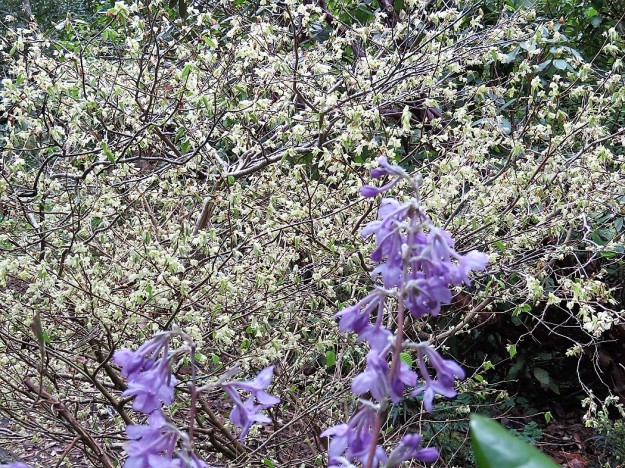 Daphne genkwa with its corylopis backdrop

So too with the less common blue daphne, D. genkwa. I photograph it every year and then delete almost all the photos as not doing justice to the plant at all. This may be because it is not a shrub with much to distinguish it other than its remarkable lilac blue flowers. And so too the corylopsis, often referred to as witch hazels. I think we only have two different forms of corylopsis. One flowers earlier and makes a charming haze of creamy yellow behind a Daphne genkwa. The other is flowering now and may be a form of C. pauciflora but we have never taken much interest in unravelling the family. They just occupy a space and remain relatively anonymous for most of year except for their splash of dainty blooms in the two weeks or so when it is their turn to shine. Colder, drier climates appear to get a more extended flowering season on a number of these deciduous shrubs whereas, in our mild conditions, they are more of a fleeting delight. But on their days, what a delight they are.

It was garden writer, Neil Ross, whom I first heard likening a garden to musical theatre. Don’t plan a garden full of stars only, he said. Those stars need the chorus to make them shine so don’t forget those plants filling the role of the chorus. That is how I see these plants which have a short season – chorus cast with a brief solo in the spotlight. 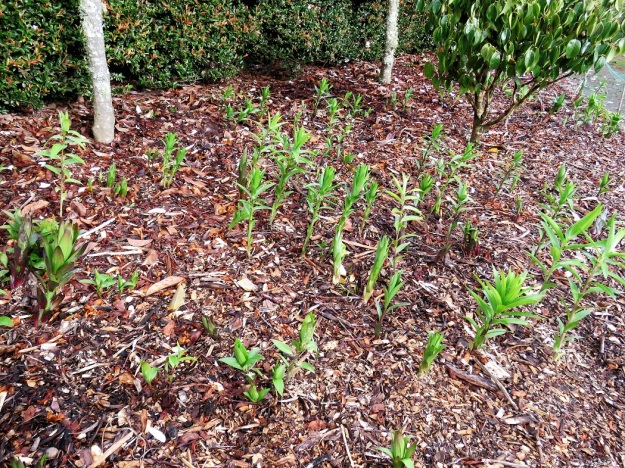 Just look at the lily border. It never looked like this last year when the rabbits won the battle on the emerging shoots. Mark is getting bored with his daily round of vigilance and looking forward to the time when the stems get tall enough to be out of the reach of the rabbits. But spraying the plant with water and sprinkling just a part teaspoon of blood and bone on each plant is working. The reason for doing it one by one is because it has to be reapplied after rain and we don’t want to be over fertilising the whole border by broadcasting the blood and bone freely and often. Besides, I was a bit shocked at the price last time we bought some. It would be easier to manage if we bought some liquid blood and bone so it could just be applied with one action but we will use up what we have first.

The price to pay for a lily display is clearly ongoing vigilance.

Yes, yes I know the advice is always given not to drive over hoses. Based on experience, it appears that you can get away with it when the hose is still relatively new but there comes a point in the age of the hose when one incident of driving over it can render it a very leaky hose. This of course means that over the course of the next weeks, any user of said hose gets wet legs until the right stage of being fed up is reached and the hose replaced. We haven’t quite got to this point but it is imminent. And I will try not to drive over the next hose length.