Regular readers will know that we are very keen on bulbs here. As I surveyed the January ones, I figured that most bulbs are stars on their day. I guess because they are both seasonal and transient, they have to wow in their short time in the spotlight. A bulb in bloom can make you look in admiration, despite even the most unattractive location. We would not be without them. 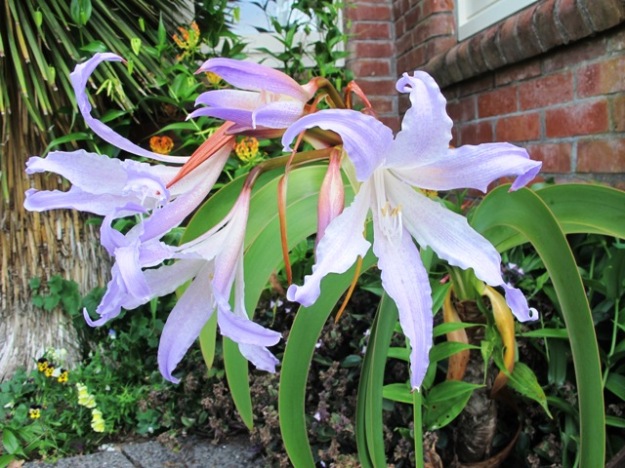 Indubitably, the star this week is the unusual Empress of Brazil (Worsleya procera syn. rayneri) which does indeed hail from Brazil. It is an exotic showstopper. But the reason it is hardly ever seen is because it is rare in cultivation and requires a patient gardener. This particular specimen took 13 years from planting to bloom. There aren’t many gardeners willing to wait over a decade for a flower.

The Scadoxus multiflorus ssp katherinae are also big and showy but much easier to source, being very popular with Auckland landscapers. We have reached the point where they seed down and are naturalising themselves beneath trees where they have become a real feature in the summer shade garden. Some of those blooms are getting close to the size of human heads. We have South Africa and Zimbabwe to thank for these beauties.

In sunnier spots and on the margins, it is the lilies that astound. I wrote about the aurelians two weeks ago but it is now the time for the auratums (sometimes known as the golden-rayed lily of Japan). These can be sourced from garden centres in winter. Just make sure you never let the bulbs dry out, even when they appear dormant. If you give them lots of TLC for the first few years, you can increase numbers from the small offshoots as well as raising seed.

Gloriosa superba are often called climbing lilies, though they are only distant relatives at best. These are great plants for hot, dry conditions – the sort of spot many of us have under house eaves facing north. They flower for a long time in high summer and require absolutely no care at all beyond giving them something to cling to so they can climb rather than tumble.

Gladioli! Dahlias! We often take both families for granted but summer gardens would be poorer for their absence. We don’t have many of the Dame Edna hybrid gladdies. While there is a certain charm in their exuberant vulgarity, we are less enamoured of the rust that afflicts the foliage, making them unattractive plants. This white gladiolus is not a species, as far as we know, but it is somewhat further back up the breeding chain from the modern hybrids. Dahlias I tend to lump in with perennials though technically they are tubers, so within the bulb group.

The crinums are coming into flower and C. moorei is another shade garden option though it needs to be in a position where its rather large foliage can be ignored during the times when it is scruffy. These plants stand chest height, the fragrant flowers close to nose level so there is nothing small and dainty about them.

Add in the crocosmia featured last week, the tigridias in Plant Collector today, summer flowering ornithogalum, the yellow zephyranthes (‘rain lilies’), even the early Cyclamen hederafolium coming into flower. While January is not in any way peak bulb season, those in bloom add a great deal to the summer garden.