Even though we garden on a large scale across 10 acres, the little pictures are as much a delight as the big ones. For many months of the year, the species cyclamen give us charming detail. Over the years, Mark and his father before him gathered up all the different species they could find. When it comes to showy and proven garden performance, we now rely on four different ones which take us through most of the year – C. hederifolium flowers from January to late autumn, C. coum which takes us through winter, C. repandum for spring and C. purpurascens which flowers on and off all year round. C. graecum also flowers well but does not increase readily. 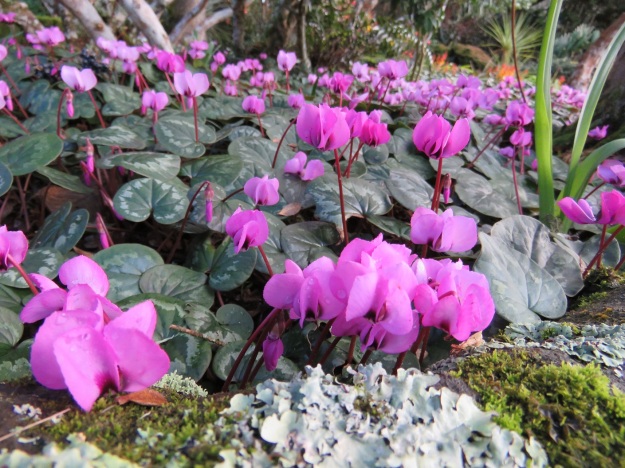 There is a world of difference between the dainty species and the big hybrids which are sold primarily as house plants. Those are mostly bred from C. persicum, which we also grow but in itself it is not a stand-out performer in our conditions. I am not a fan of the hybrids, even less so when they are used as garden plants. To my eyes, they lack the charm and refinement of the species. They have been bred for a different purpose and have flowers which are much larger, often in different hues and sometimes selected for novelty value in flower form. But that is all a matter of taste.

A key to understanding cyclamen is knowing where they come from. This explains why C. libanoticum failed to establish as a garden plant here. It is native to the mountains of Lebanon – hardly conditions we can replicate. As it has the most beautiful flowers of any cyclamen I have seen, I was disappointed – though Mark tells me he still has it growing in his nova house (best described as his private but chaotic treasure house of obscure and curious plant material which may or may not transition to the garden, eventually). 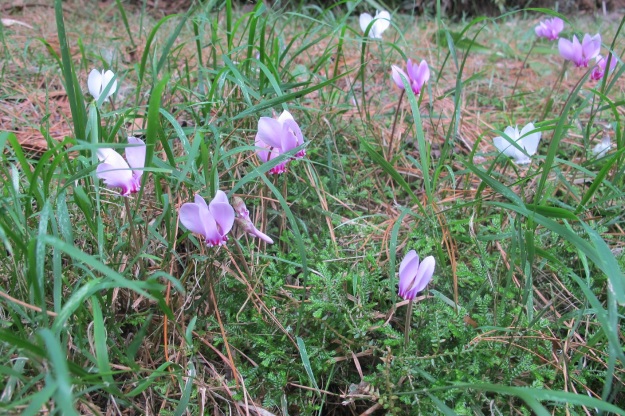 C. hederifolium (formerly known as neapolitanum) has been the easiest to naturalise for us – to the extent that we can even claim that we have carpets of it. It has a wide distribution from southern France through the Mediterranean to western Turkey, growing in range of conditions from rock and scrub cover to woodlands. We find it is happy in both full or partial sun on the edges of woodland areas but it needs good light levels so is not so satisfactory in shade. Some years ago, Mark scattered seed across grassy banks in our park and now we have it naturalised in meadow conditions. C. hederifolium sets lots of seed which is easy to germinate as long as it is sown fresh and not stored. The seed pods form on the end of corkscrew spiral stems. If you know somebody growing it, you may be able to request some seed.

If only C. purpurascens would set seed as freely, we could use it much more extensively. It is one of the more hardy, European species, occurring naturally as far north as Poland. It is also a terrific performer, evergreen and flowering much of the year. But it sets very little seed and that seed does not germinate readily so it is not an easy plant to increase and naturalise, despite its unfussy ways once it is growing. 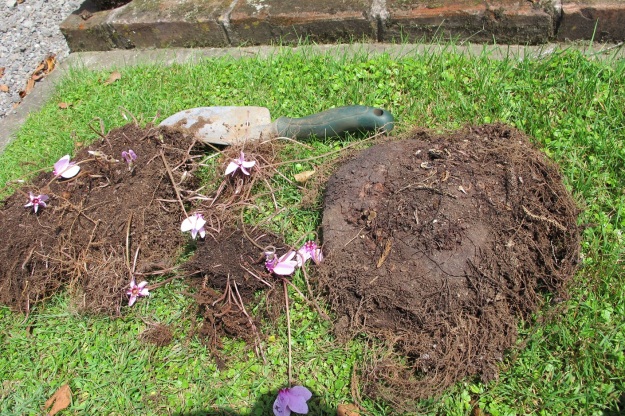 Cyclamen hederifolium tubers with trowel to give scale

Cyclamen grow from flat, disc-like tubers. While hederifolium tubers can get very large – I have measured up to 15cm across on old specimens – our more delicate coum and repandum stay small. I can’t recall ever seeing a repandum tuber much larger than my little finger nail and they are mostly smaller than that. While they still set good-sized blooms, it does mean that you need a fair number of them to have much impact. Siting is also critical. They are not a suitable option where ground is being cultivated. No matter how careful you are, the tiny corms look too much like soil when they are dormant and are therefore easy to discard or dig in too deep. Nor do they like companions which can overshadow and overpower them. Our main patches are on woodland margins, particularly as ground cover beneath tall, limbed-up evergreen azaleas. We leave them undisturbed and they reward us with low carpets of bloom, sometimes combined with snowdrops (galanthus) or the little, dwarf narcissi.  Excellent drainage is also vital. All tubers will rot out in wet or heavy soils. 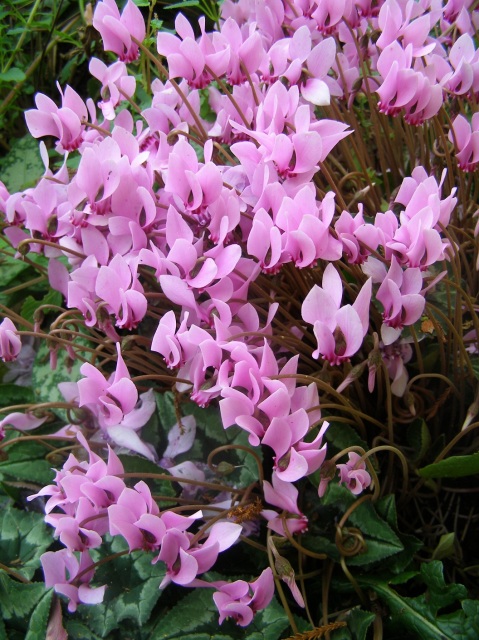 Generally, cyclamen show the typically heart-shaped leaves, usually marbled white or silver and a distinctive flower with upswept petals. They come in white and all shades of pink from palest through to deep cerise. Almost all of them are fully deciduous and like to sit on or in line with the ground surface, rather than being buried.

As to whether  the family name is pronounced “sike-lamen” or “sick-lamen”, we go with the former though Wikipedia tells me that is the American pronunciation whereas the latter is the British version. Take your pick.

First published in the May issue of New Zealand Gardener and reprinted here with their permission. 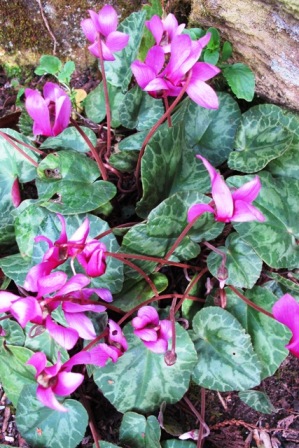 Cyclamen purpurascens seems to be in flower pretty well all year

We are big fans of the species cyclamen and C. purpurascens is starring as a garden plant. Astoundingly, this patch in the rockery flowers almost twelve months of the year and doesn’t go dormant. Most of the species cyclamen are from Southern Europe through to North Africa and are therefore used to distinct wet and dry seasons and often poor, stony conditions. C. purpurascens has a far wider distribution into Northern Europe where it is more of a woodland plant, often found growing naturally in beach forests.

It appears that we are quite lucky that our form of this cyclamen is good, clean cerise colour as it is sometimes found more in muddy pink shades but like most species, the colour can vary across the spectrum of pinks and very occasionally turning up in white.

C. purpurascens has typical heart shaped leaves, dark green mottled with silvery white markings. It grows from a round, flat tuber as do other cyclamen. Given its wonderful performance as a garden plant over several years here, the only downside is that it sets very little seed. This will be why you don’t see it around much. The common C. hederafolium sets seed freely and naturalises readily if given the chance whereas we have to be vigilant to spot the occasional seed on C. purpurascens. If you can find it, give the tuber cool, moist growing conditions which are rich in humus. Moist does not mean permanently wet – which may rot out the tuber. We have it growing on the shady side of the rockery.