“Believe me, my young friend, there is nothing – absolutely nothing – half so much worth doing as simply messing about in boats.”

Kenneth Grahame, The Wind in the Willows

I misremembered. I felt sure there was a Wind in the Willows quote about messing about in the muddy waters of a stream but I was wrong. Of course they were messing about in a boat, not mud. When I went searching, there were many other charming quotes from the same book which are gently affirming in a world seemingly gone mad, but I found another escape this week.

I have been weeding the stream. Yes, hand weeding the stream. I see it is five years since I last got down and dirty in the water, although Mark and Lloyd do a certain amount of ongoing maintenance with the long handled rake. I find it easier to climb right in and scoop by hand or sometimes with a rake. It is very muddy and Mark laughs when I stagger back up from the park but I am way too vain (or self conscious, maybe) to immortalise this by taking a selfie of Muddy Me.

There are both eels and fish in the stream – small fish, mostly mud fish – and I find it deeply unnerving when something smooth and slippery brushes past my bare legs. I wouldn’t be quite so anxious were it not for Mark’s recent encounter with an eel. He was reaching into the water to pull out some blockage when an eel mistook his hand for something else and latched on. There was blood, quite a lot of blood and all of it was Mark’s. Eels are renowned for their backward facing teeth so it is not easy to dislodge them, though I think both the eel and Mark got such a fright that everything went flying. I console myself with the thought that eels are not known for aggressive attacks and it would be bad luck for one to follow up with me so soon after. Just in case, I wear both shoes and gloves as a precaution. I am hoping one will not attack my knees, calves or thighs.  Still, as I reviewed one cleaned area of the stream a few hours later, I was disquieted to see an eel gently swimming along the somewhat bare expanse. But it was a small one and I will not be intimidated. 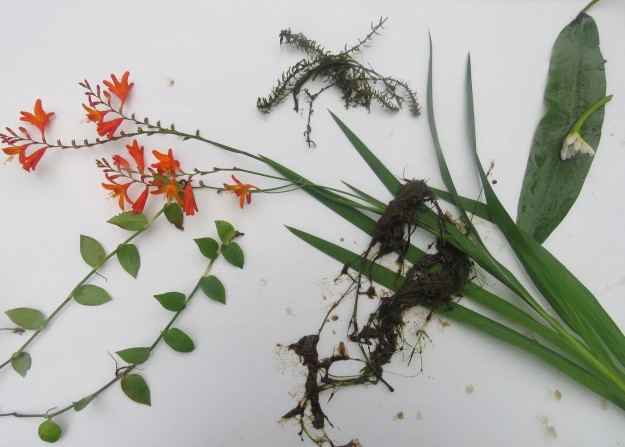 But the weeds! We get up close and personal with the weeds that are carried down to us from properties further upstream but the major flood in 2015 has caused us a few more problems than before. Crocosmia, often referred to as montbretia but technically crocosmia x crocosmiiflora, have pretty summer flowers but the huge flood carried the corms far and wide and we are now working on restricting its spread. There is simply too much of it for us to be able to eradicate it and we would get reinfested during the next flood event.

Eradication, however, is the aim with the dreaded Wandering Jew (Tradescantia fluminensis). Mark has spent two decades battling this on our properties but still we get new outbreaks washed down to us. The problem is that every piece that is broken off is capable of growing and it is truly rampant once established. Both the tradescantia and the crocosmia grow alongside the water, rather than in it.

The goal is also to eradicate the oxygen weed and the Cape Pond Weed (Aponogetum distachyum). Mark has succeeded once in eradicating oxygen weed so he was most disappointed when he saw a larger form of it getting established on our place. His theory is that it comes from people emptying their little aquariums into fresh water ways, presumably because they do not wish to euthanise their goldfish and can’t find anyone to give them too. Don’t. Please don’t ever do this. Not only do we not need or want free range goldfish in our waterways, the oxygen weed becomes a choking blanket in slow moving fresh water. We have spent countless hours pulling it out but unless we get every bit, it will grow again. Ditto the Cape Pond Weed, about which I have written several times in the past.

What I call the blanket weed – a mass of very fine filaments – is here to stay but we try to keep it from getting too solid and impeding the flow of water. It is at least easy to rake out. Besides, the aquatic life needs some cover.

We are not perfect. Although we try and dead head our waterside irises and primulas, some of those may have washed downstream. I did at least go to a lot of effort to get rid of the noxious flag iris beside and in the water when we realised what an environmental hazard it is in this country.

In the meantime, there are worse ways to spend a pleasant, mild day than poddling about in the water. Our adult son is returning home from overseas next week and plans to stay for a few weeks. He spent many childhood hours playing with his mates in the ponds and the stream  – boogie boarding up and down and playing bike jumping games into the water. I am wondering at what stage I might suggest to him that it would be a huge help to his Aged Parents if he could turn his attention to scooping or raking the weeds from the deepest sections of the ponds which are beyond my reach. We shall see. 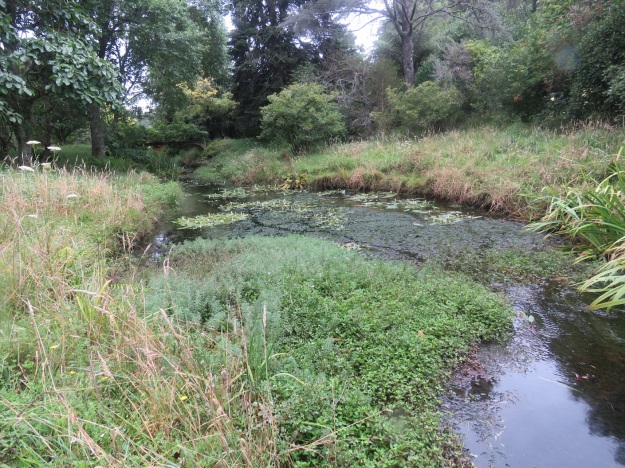