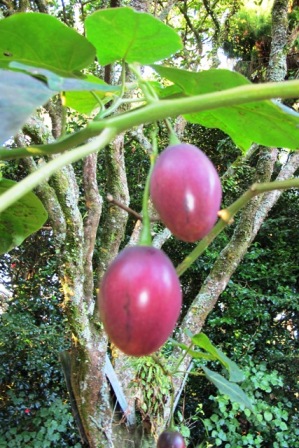 This is not a crop for inland or southern residents unless you have a holiday house on the coast. Even then, it is becoming an endangered species but ours still staggers on. This is another South American fruit which we have made our own in this country (along with the feijoa). In fact, it was NZ that conferred the name tamarillo. Older readers may remember when it was still called a tree tomato, though botanically it is Solanum betaceum.

Problem number one for inland gardeners is that it is very frost tender. It is a solanum so think same family as the potato and tomato (and nightshade but we can ignore that). It has to be completely frost free in its first year or so and will only take the lightest hints of frost once established. With its big, soft leaves and brittle growth, it doesn’t take kindly to wind, either. But readers, probably coastal, who can give protected and warm conditions, should have more success. It is not at all difficult to grow if you can find the right position.

Problem number two is more recent – the dreaded potato psyllid which is a fairly new arrival. It weakens the plant so badly that it usually dies. It takes up to two years for a plant to get large enough to crop, so it is relatively fast growing for a fruiting shrub. If you are really keen on tamarillos, it is probably advisable to keep raising replacements from cuttings, to ensure continued supply. They are not too bad from seed, either, though plants you buy will be superior selections. Because the psyllid is airborne, you can replant in the same area. Being a solanum, it is a gross feeder and will respond to rich soils full of compost and well rotted manure. Plants are self fertile meaning you only need one to get fruit though they do seem to crop more heavily in company.