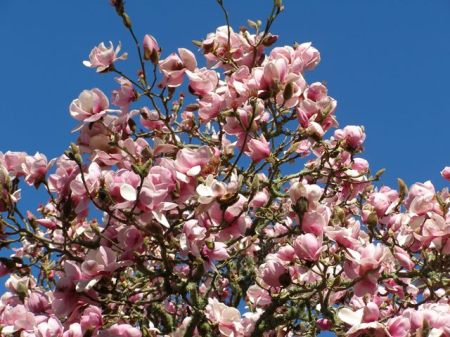 1) Tropaeolum tricolorum, a distinctly refined member of the nasturtium family in Plant Collector this week.
2) Yates Vegetable Garden – yet another NZ gardening book in that folksy-wolksy vein that NZ publishers think is all we can cope with these days.
3) Managing bulb meadows and drifts – Abbie’s column
4) GIY Peas A little introduction to growing peas in warmer climates.
5) Even we can lower our sights – the first of our clearance specials. First up a splendid hedging line of Camellia Jury’s Yellow.

No apologies for continuing to lead with Magnolia Iolanthe this week. In a season which will not rank as memorable for magnolias, Iolanthe has not wavered or faltered and is simply beautiful. The first flowers on Serene are just opening – she is always the last of the season to flower for us. The magnolias will be drawing to a close in a matter of weeks, but the rhododendrons are coming into their own. The camellias battle on, badly affected by petal blight but doing their best. Mark uses the blower vac on them to blast away the blighted blooms which otherwise refuse to fall. It is such a disappointment, is camellia petal blight, but there is no point in railing against something we can not alter.

In our southern hemisphere summer, Michelia alba is in flower. One could never describe alba as being in full flower – it just gently flowers over a long period without ever putting on a mass display. We planted it near our swimming pool so it could perfume the air in the summer months but as it grows ever larger, we are wondering if we have made a mistake. After about eight years, it is already around eight metres tall and showing no sign of slowing down. It has splendid foliage for those in warm enough climates to grow it and the flowers make up for their rather understated (almost insignificant) appearance with their heady fragrance. We have never seen any evidence that alba is fertile, either as seed parent or pollen donor and lean to the belief that it is likely that there is only one clone in existence and that is sterile. We have champaca (believed to be the seed parent of alba on the premise that alba is most likely a natural hybrid) which has attractive colour in the flowers but the forms we have seen are scruffy as garden plants.

Michelia alba, in the centre rear of the photo, has lush foliage but is growing at an alarming rate in our garden

Mark’s Fairy Magnolia Blush (the first of his michelias to be released) is also summer flowering but these are random blooms which lack the colour of the main spring season. We have decided that the move to lump all magnolia relations, including michelia and mangletia, into the magnolia group is not helpful so we are going to remain with the former nomenclature at this stage. Mark is of the view that michelias are a distinct group which warrants being kept separate. As far as he knows, nobody has yet proven that they can successfully cross michelias with magnolias, or indeed mangletias although some have claimed hybrids. We will wait for proof because we doubt that it is possible to achieve crosses between distinctly different groups without scientific intervention.

Many of the deciduous magnolias are summer flowering at this time but we never get particularly excited about these. They are bonus flowers, tucked in amongst the foliage, and they lack the impact of the spring flowering on bare wood though it should be said that Black Tulip has put up some fine dark flowers this year. Iolanthe, Apollo and Serene all have summer flowers – in fact most soulangeana hybrids will do so. With our very strong sunlight (blame the depletion of the ozone layer along with our clear atmosphere) summer flowers tend to burn.

Magnolia Serene has stand out dark foliage. Generally speaking, the foliage on deciduous magnolias does not excite much interest and in summer, most of them are just green trees with relatively large leaves. But when we cast our eyes around a number of trees in our garden landscape, Serene stood out as having deeper colour and appearing glossier than the others nearby. We think it has considerable merit as a specimen tree for its summer foliage as well as its form and spring flowering. Some magnolias stand the test of time and this is one of Felix’s where we are surprised that it has not been picked up more widely in the marketplace. With its later flowering (ref Magnolia Diaries 11 and 12 to see the flowers) it should perform well in cooler climates.

Magnolia Serene, the last of Felix's selections to flower each season

Our magic spring has continued with no wind. A magnolia flowering season with a bad weather factor of only two short lived storms is a good season here. Though I am told that in the south of the province, a series of severe frosts have taken out most of the season’s display. In the deciduous magnolias, Burgundy Star flowers on and is still looking good whereas Felix’s series (Iolanthe et al) are now past their peak. Iolanthe will continue on for weeks yet, but not in her full glory. Serene is still opening. This is one variety that we have been surprised has not had more recognition overseas. Good pink colour, flower form and size, flowers later but still on bare wood and a tidy, well behaved tree. Being liliiflora x Mark Jury, it has reasonable hardiness.

It is full on michelia season. Fairy Magnolia Blush continues in flower and the lollipop row on our frontage is looking good. They were planted in quite harsh conditions (compacted old driveway, in some cases) about five years ago but haven’t minded a bit. I give them a light clip twice a year to retain the shape but otherwise they are left entirely to their own devices.

Mark’s Honey Velvet is in full flower. This is a Magnolia dianica (syn: Michelia yunnanensis) selection and every nurseryman, woman and dog has their own selection made now, so easy is it to raise seed. All we can say about Honey Velvet is that it has a honey cream coloured flower (rather than white) of good size, wonderful bud set, longer flowering season than some and good dark foliage. And it does not appear to defoliate in a cold, wet spring as some of the dianicas do. Other than that, we can’t get too excited about what is just a species selection.

We can and do get excited about the michelia breeding programme and the increasing range of deeper flower colour and size we are starting to see as Mark continues down the track of ever more complex downstream crosses. We can see real progress here but that, alas, is all we can say publicly. It was a bit of a red letter day here yesterday as Mark decided that he was happy to give the go ahead on another deciduous magnolia. Mark has only ever named three magnolias in a breeding programme which has built on his father’s work and thus spans close to five decades now with many hundreds of magnolia plants raised. So to make the decision on a fourth one is no light matter. It is still a long haul from here through final trialling and production before it ever gets anywhere near the marketplace but all we will say officially is that this one is not red.

Yes, I admit it we are rather dominated by magnolias at the moment but at this time of the year we live and breathe them and the current all-round-simply-astounding plant has to be the original Magnolia Iolanthe. It is a tree of grand proportions after nearly fifty years and in full flower, it really can take your breath away. We describe it as the original Iolanthe because it really-o truly-o is the first plant, grown from a seed of a controlled cross by Felix Jury. A controlled cross is a deliberately managed hybrid, as opposed to a chance seedling. He heeled a number of the resulting seedlings into his vegetable garden, intending to plant them out to beautify Waitara but Iolanthe popped open a flower. And even that first flower indicated it was pretty special. So special in fact that the plant remained where it was heeled in and these days Mark is moving the vegetable garden rather than attacking the tree. All other Iolanthes around New Zealand and the world have been propagated in the first instance from the tree that graces our driveway.

We still rate Iolanthe as a top variety in the soft lilac-pink and cream colour range. It has a very large flower and because it sets flower buds down the stem, the flowering season is long. If one set of blooms is damaged (the hail storm on Tuesday last week wasn’t great and nor was the follow up last Sunday), within a week a fresh set of buds opens. And there is a second flowering in summer. We did once see Iolanthe plants being sold in a garden centre with labels describing it as a small tree to two metres. I don’t think so, but if you have sufficient space, Iolanthe is unlikely to disappoint..

The inspiration for the name came from the late Iolanthe Small, the dedicated plantswoman who spent the better part of her lifetime working in the Fernery at Pukekura Park.

Back in the 1950s when Felix Jury was establishing the garden here, one of the plants he coveted was Magnolia Lanarth. He ordered it from Hilliers in the UK. History is a little vague as to what number and form the plant material took (scions or plants) but it included a seedling which, when it flowered after a number of years, was clearly not the solid purple flower of the chosen cultivar. No, instead it was very large and pale lavender pink and white. Enquiries from Hilliers established that it was most likely a cross between Lanarth and sargentiana robusta. Felix did manage to establish true Lanarth (Magnolia diary entries 1 and 4 have photos of the splendid specimen after fifty years), but the chance seedling proved to be the jump start for a breeding programme. Felix subsequently named it Mark Jury, for his youngest son and it has been distributed in the trade both in New Zealand and overseas. We have never promoted it widely ourselves. Although it makes a splendid large tree for a park, we think the next generation are superior garden plants.

From Magnolia Mark Jury came Iolanthe (ref Diary 7), Milky Way, Lotus, Athene and Atlas (all involving forms of lennei) which are all flowering now. Apollo too is flowering (this one does not have Mark in its lineage, being thought instead to be a liliiflora nigra hybrid crossed with Lanarth). Picking favourites is all about taste. Iolanthe has an exceptionally long flowering season and a large flower with good colour here (though we were disappointed at how it looked in Switzerland at Eisenhuts and it does not appear to be the stand out performer in the UK and Europe that it is here). Lotus has a perfect form in pure cream but can take 5 or 6 years to settle into good flowering. Athene has blooms which in our eyes are simply beautiful. Atlas had the largest flowers imaginable until rivaled by Felix. Apollo is our best purple so far. Milky Way is just an all round top performer. What more can we say? Felix’s legacy is still remarkable.