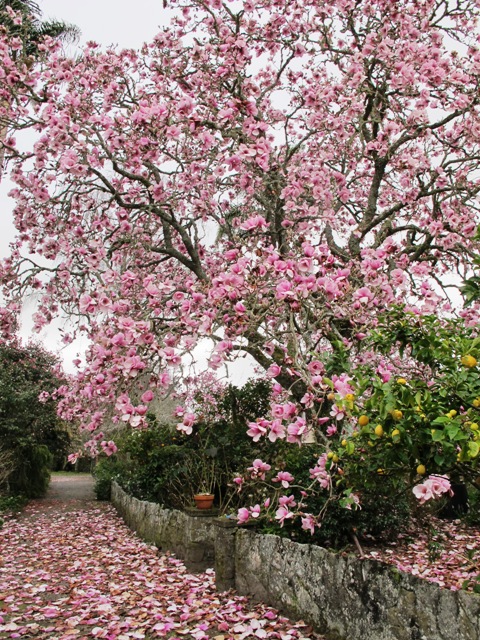 Yes, I admit it we are rather dominated by magnolias at the moment but at this time of the year we live and breathe them and the current all-round-simply-astounding plant has to be the original Magnolia Iolanthe. It is a tree of grand proportions after nearly fifty years and in full flower, it really can take your breath away. We describe it as the original Iolanthe because it really-o truly-o is the first plant, grown from a seed of a controlled cross by Felix Jury. A controlled cross is a deliberately managed hybrid, as opposed to a chance seedling. He heeled a number of the resulting seedlings into his vegetable garden, intending to plant them out to beautify Waitara but Iolanthe popped open a flower. And even that first flower indicated it was pretty special. So special in fact that the plant remained where it was heeled in and these days Mark is moving the vegetable garden rather than attacking the tree. All other Iolanthes around New Zealand and the world have been propagated in the first instance from the tree that graces our driveway.

We still rate Iolanthe as a top variety in the soft lilac-pink and cream colour range. It has a very large flower and because it sets flower buds down the stem, the flowering season is long. If one set of blooms is damaged (the hail storm on Tuesday last week wasn’t great and nor was the follow up last Sunday), within a week a fresh set of buds opens. And there is a second flowering in summer. We did once see Iolanthe plants being sold in a garden centre with labels describing it as a small tree to two metres. I don’t think so, but if you have sufficient space, Iolanthe is unlikely to disappoint..

The inspiration for the name came from the late Iolanthe Small, the dedicated plantswoman who spent the better part of her lifetime working in the Fernery at Pukekura Park.