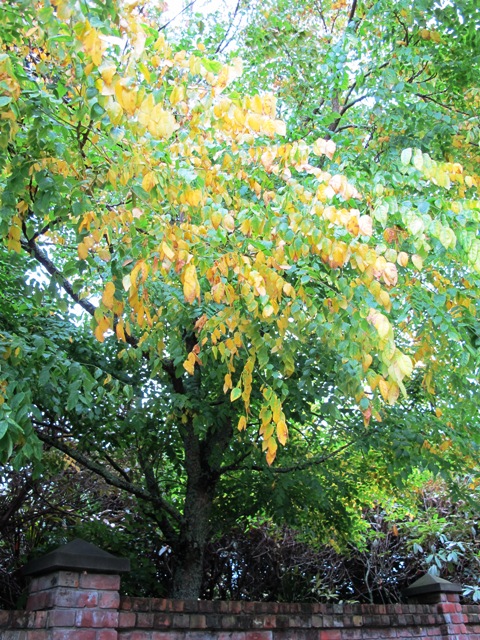 There is nothing rare about the koelreuteria which goes by the charming name of the “Golden Rain Tree” or, apparently, “Pride of India” despite the fact it comes from China. The golden epithet does not refer to the lovely golden leaves which colour-up even in our temperate coastal conditions, but to the summer flowers. Alas we have not seen these on our tree, despite it being about five metres tall and well over a decade in age. It appears that we may not ever get many flowers because this is a tree adapted to an inland or continental climate. It likes a cold, dry winter and hot, dry summer – neither of which it gets at our place. However, it is pretty enough with its fresh spring foliage and its golden autumn colours for us to keep it in the garden.

When the flowers pass over, it develops showy pinky-brown seed pods – referred to in the literature as “inflated and bladder-like”, which sounds less appealing than they look.

There is another koelreuteria species, K. bipinnata, which is sometimes referred to as the Chinese flame tree. It is not as common as K. paniculata and is more spreading, growing wider than it is tall. Its flowers, foliage and seedpods are similar although it usually flowers later in the season, heading into autumn. It is probably just as well it is not so common here because it appears to have invasive habits in certain climates and would probably prove equally problematic in areas of this country.