The Missouri Meadow in 2009

No discussion on the Sheffield School is complete with the Missouri Meadow at the RHS flagship garden, Wisley. This is the work of Professor James Hitchmough. We first saw it in late June 2009 and it was an absolute highlight of that trip for us. A joy. Inspiring.

The planting was started from seed sown in 2008 so we saw it in its second year. The selected mix had a heavy focus on North American perennials, hence the Missouri reference. It was still low growing and relatively sparse with gravel mulch. It was also completely different to its adjacent plantings – the Tom Stuart-Smith perennial beds that face the glasshouse directly across the lake and the Piet Oudolf twin borders up the slope. That distinction was a defining character of the area.

We next saw it five years later in the same month of the year in 2014. It had matured, changed. The juvenile charm had gone but it was still meadow-like with lots of variety and bloom. The demarcation lines had begun to blur as some plants formed sizeable clumps so it was not as clear where the Missouri Meadow ended and the Stuart-Smith plantings started. I think most of the echinaceas had gone. Ain’t that just the way? I don’t feel so bad about our failures to get them established as permanent plants.

Looking at the photos, I think there are lessons to be learned in  terms of the outcome of a very laissex faire maintenance regime. Meadow it may be but whether this is the meadow effect that is wanted is something else altogether. Also the growth habits of the different perennial plants has a major impact Where plants form solid, vase-shaped clumps, such as the day lily and red hot pokers (hemerocallis and kniphofia), over time they morph into a more traditional herbaceous planting where they will dominate more ephemeral plants and choke them out. Plants which gently spread, rather than clump, like the geraniums and achilleas, retain more of a meadow feel in the longer term. Many of these are quite shallow-rooted so they can get out-competed by more determined neighbours. I am no longer clear where the meadow planting by Hitchmough meets the perennial planting of Stuart-Smith so I am only guessing that the kniphofia may be the former and the hemerocallis the latter. 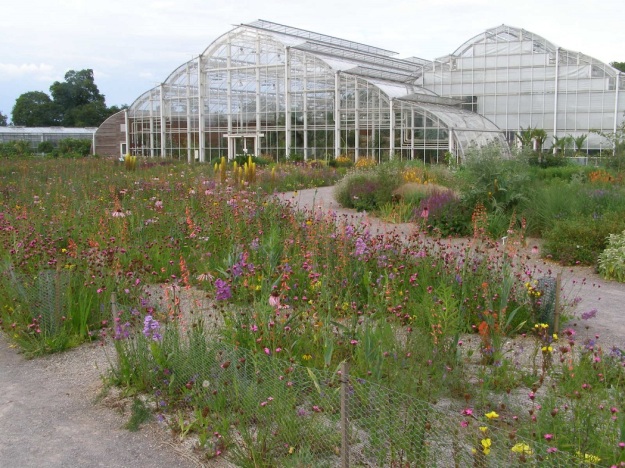 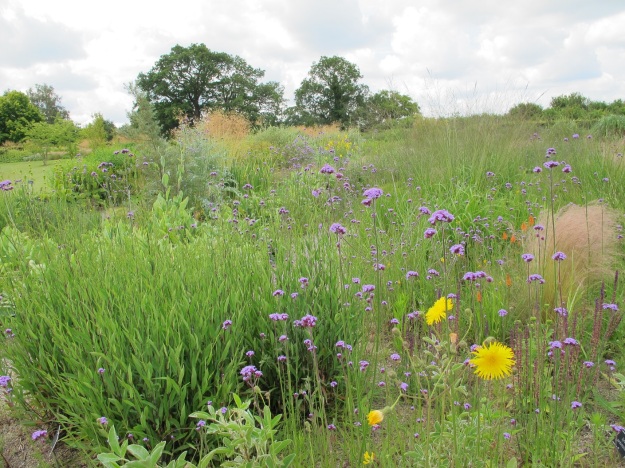 Three years on, we were looking forward to seeing the Missouri Meadow again in 2017. Same time of the year (note to self: it is time I booked these trips at a different time of the year). One-Who-Knows warned us that we may be disappointed. I would say more interested, than disappointed. 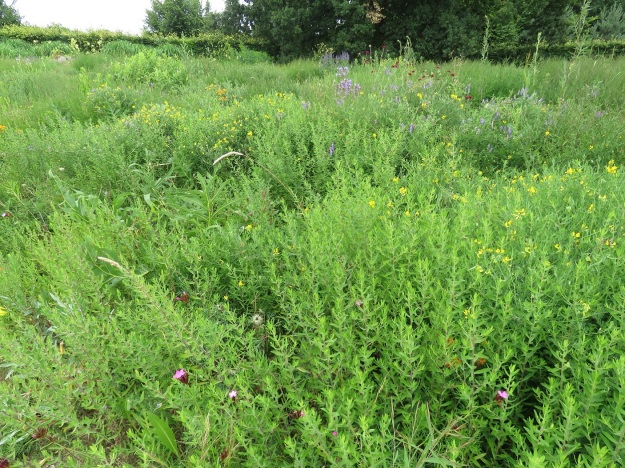 Most of it was no longer a visual delight, though it may well be eyecatching for a few weeks when the aster flowers, turning it into a sea of blue. I am deducing it is A. oolentangiensis, as named on the display board, that has colonised the largest area and is on track to smother everything else out. It would seem a problem for Wisley staff in that they cannot continue to leave the area to evolve because it is in a prominent location, taking up substantial space. Garden visitors are more likely to judge on immediate appearances than take an interest in the evolution of a naturalistic planting. The inclusion of this aster in the original mix appears not to have been a good long-term decision for the conditions and climate at Wisley. I wonder if it has been dropped from subsequent seed mixes from the Sheffield School?

Of course there is trial and error in this new wave gardening and that is one of the roles taken on by the Royal Horticultural Society in collaboration with others. Mark observed that the whole area had been in for nine years, requiring very few resources and, seemingly, little maintenance. If it needs a major reworking once a decade, that is still a lot less input than more traditional perennial plantings in herbaceous borders.

As I understand it, the aim of the Sheffield School is to create self-sustaining eco-systems that don’t require even that level of intervention. It will be interesting to see whether the higher proportion of grasses at Olympic Park overwhelm the pretty perennials over time or whether the current balance is maintained. The extensive recent plantings by Hitchmough’s colleague, Nigel Dunnett, at Trentham Park are currently at the show stopping stage of gorgeousness. More on these in a post to come. No doubt the experience gained from the Missouri Meadow will have been applied to these newer plantings in some way or another. And we will continue to follow with interest what the Wisley staff decide to do with their earlier example of a managed meadow of predominantly American perennials. 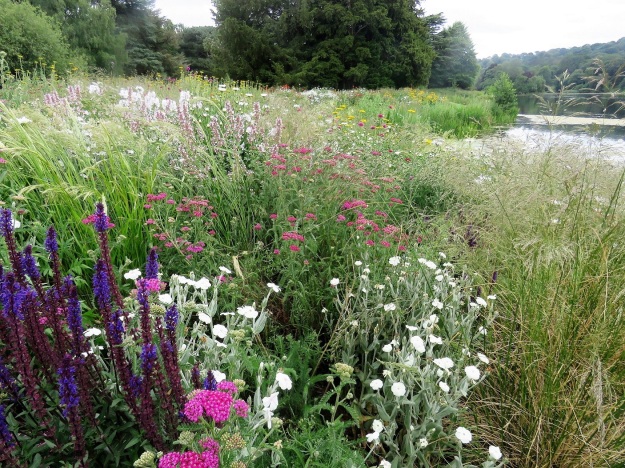 There is a quandary in gardening: when you have a style that looks its most appealing and delightful when juvenile, do you commit to returning that area to its juvenility from time to time in the ongoing attempt to recapture the charm? Wisley is not alone in having that problem. I see domestic gardeners do it all the time – hacking back shrubs like azaleas and camellias to ground level to encourage them to “come again” amongst other examples of gardening brutalism. We lean more to celebrating maturity and moving on, probably in life as well as gardening.

Will the Missouri Meadow be developed further or should it be wiped and resown to achieve that early charm again?