We have abandoned the tyranny of the perfect lawn

Monocultures. We have been talking about horticultural monocultures – the cultivation of a single crop on a large scale.

I saw a monoculture in Malaysia – palm oil. The accompanying photograph was taken from a moving bus and shows a relatively recent planting. As palm oil plantations go, it is not one where native forest has been cleared for commercial purposes and no orang-utans were endangered for this one – that is happening in Indonesia more than Malaysia. But palm oil is an extensive monoculture.

Palm oil – the increasingly common monoculture of some Asian countries

In this country, we have a localised but more extreme example of the risks of monoculture in our golden kiwifruit. As I understand it, that was not only one crop – it was one clone. That means that pretty much all the golden kiwifruit plants descended from the same original specimen. So when that plant selection succumbed to the dreaded Psa bacterial disease, it affected all plants equally and threatened the very existence of the crop. The race is on now to find clones which are resistant to Psa.

You can’t buy plants of golden kiwifruit in this country because that one clone that was used and the replacement clone are restricted to licensed commercial growers only. In recent years, Mark has been raising seedlings from fruit we have bought and this year we had minor harvests. Because this fruit does not grow true from seed (it needs to be vegetatively propagated), our seedlings will be genetic variations. The fruit so far is not of the same size and consistency of the commercial selection and the taste varies between plants but it looks as if we may have some viable options amongst the crop to keep ourselves supplied. 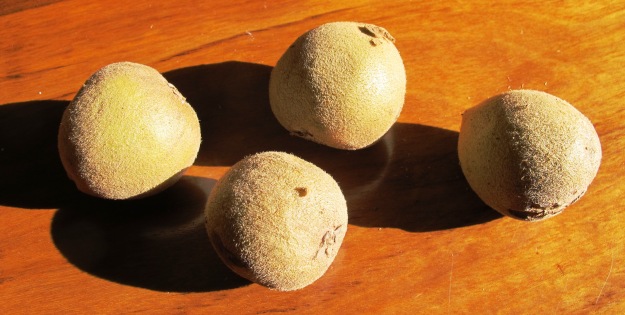 Raising our own selections of golden kiwifruit gives genetic diversity

But where do monocultures fit in when it comes to a gardening context? Matched avenues of the same tree. Massed plantings of a single selection in the modern landscape style. Lawns. Of those, lawns are probably the only monoculture in a technical sense, but they are a major issue.

Matched avenues can look fantastic when they are at their best. They give a beguiling formality and structure to a garden or landscape. When they are at their best. The problem is that plants are living things and don’t always oblige by growing uniformly. I am sure some readers will be nodding in wry agreement. Then there is the problem if a plant dies. Matched avenues with gaps are nowhere near as pleasing. And you are faced with a conundrum. Do you leave the gap? Or replace it with the same plant selection which will almost certainly be a different size and stick out like a sore thumb for years to come? And how do you know that the affliction that killed the missing plant isn’t in the soil and therefore likely to attack the replacement plant as well? Replace the dirt as well, maybe? It is often difficult when things go wrong.

Many modern landscapers favour massed plantings of a single plant variety. It is a broad brush technique which can be visually effective, if you like that look. But if you have a problem, you end up with the acne look which is not so nice at all. A few dead lavenders amidst your simulated fields of Provence, massed rust-spotted renga renga lilies which look as if they have chicken pox – this can easily be your lot if you favour the monocultural approach. Or indeed, you may lose the whole patch at once which can be expensive when it comes to a quick-fix replacement.

Nature of course does not generally grow as a single species. In the wild there is often a dominant species but around that, there will be a host of other plants in a natural mixed colony. That is what makes it nature.

Nowhere do we fight nature more than in the highly valued lawn. There, it is often decreed, the only plants to be accepted are the selected grass species – often rye and fescue. Anything else is an interloper to be weeded or poisoned out. That is a never-ending battle yet we persist in demanding the perfection of the monoculture of lawn grass. Lordy lou but I was reading about an obsessive English gardener this week who is so proud of his lawn that he tends it constantly and mows it with pride six times a week! I looked at the photo – a bowling green style with five brown patches where he had clearly sprayed out weeds.

We have made the conscious decision to abandon this futile quest for lawn perfection. As long as it is green, fine-leafed and able to be mown, it can stay. Perhaps more controversially, Mark tells me that he has decided the flowering clover and self-heal can stay. He likes the patches of colour and the fact that these flowering lawn plants feed the bees and butterflies. We are headed down the mown green meadow path rather than the garden lawn. No monocultures here. The more experience we get in gardening, the more we favour a natural style which works with, rather than against, nature.