“I thought I saw you bent over, working in the garden,” Mark said. “And then I realised I was talking to a pink bucket.”

I went looking for the pink jacket made from Nana’s old bedspread and I found a whole lot of pink  clothes that the elder daughter does not wish to part with so has left here. Most i sewed for her 20 to 25 years ago and most are recycled from fabric Nana had used or stored, although I can not take credit for the pink prom dress on the right!

In self-defence, he would like it known that he was some distance away at the time. And I would like it known that I would not be seen dead wearing skirts, shorts or trousers in that shade we refer to as highlighter pink – on account of highlighter pens. Mark’s late mother had a penchant for that hue in both clothing and, occasionally, soft furnishings. When we moved in to the homestead, we found one such relic – a nylon quilted and frilled bedspread in bright pink. Our elder daughter was 16 at the time and took a liking to the colour so I made it into a quilted jacket for her, to be worn with a rather small pink brocade skirt also made from some repurposed fabric left behind by her Nana. Amusingly, she has kept onto it and it hangs in the wardrobe of her old bedroom here with other favoured clothes from her youth. It is like a trip down memory lane every time I look in there. 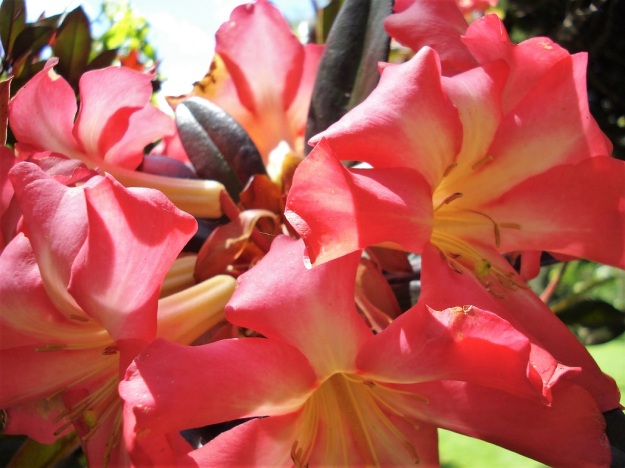 It was this passion for pink – bright pink – that led Mark to name a bright pink and yellow vireya rhododendron for her. He prefers descriptive names for his plant selections and rarely names them for people (the notable exception being the magnolia he named for his father, Felix Jury). When he does, it is by allusion. So, our JJ’s vireya was named ‘Pink Jazz’ – Jazz being the name her friends called her. Each time it flowers in the garden, I smile at the memories. (And, to pre-empt enquiries, we have no idea if it is still in commercial production. It is not one we kept any control over so other nurseries can produce it – or not- as they choose.)

I had been admiring the crop of figs that was coming along nicely. Our fig tree carries two crops – the first ripens in mid-summer and the later crop only ripens in autumn if we get a good season. But when I thought the first ones may be ripe, I looked closely and the crop was greatly reduced. The birds are not as fussy as we humans when it comes to savouring the delights of a fully tree-ripened crop.

Now I am bagging the individual fruits. In a nod to growing concerns, I have shunned the white plastic bags with the bottom cut off and freezer ties we have used in the past. This year, the fruit are individually bagged in paper (no need to cut the bottoms off with paper, Mark told me after I had done the first few) and jute string so fully degradable if any land on the ground. It takes a bit of effort but the rewards of tree-ripened fruit warmed by the sun make it worthwhile. I must put some good camembert or brie on the shopping list. Is there anything more delicious than a platter of ripe figs, soft brie, my fresh grapefruit jelly made this week, walnuts and homemade oat crackers?

It is high summer here and Lloyd has started to mow the meadow. We have learned from our experience that in our verdant conditions, we must mow twice a year – once in high summer and then again in late autumn. The grass loading is just too great to deal with if we only cut it down once a year, as is recommended practice from places where conditions are harder and grass growth is a great deal less.

Fennel, not a ‘yellow lace-cap hydrangea’

The roadsides in our area are full of flowers at this time of the year – crocosmia, hydrangeas, agapanthus and fennel in particular. Whether you see these as weeds or wildflowers is entirely a matter of personal opinion – it is a bit like the glass half-full or half-empty scenario. I stopped to photograph the wild fennel and agapanthus because it reminded me of the English summer visitors that arrived one year. I have told this story before so apologies to long-term readers who may have read it earlier. These visitors wanted to know what the ‘yellow lace-cap hydrangeas’ and ‘giant bluebells’ were that they were seeing everywhere. I managed to identify the former as fennel but could not for the life of me think what the giant bluebells were – until I drove out our gateway and it dawned on me that they were the lowly agapanthus that is so happy in local conditions that it has naturalised itself. Agapanthus is not generally favoured as a garden plant in most of NZ – too common, more often seen as a weed. But in midsummer, our roadsides are glorious when they bloom.