There are five good reasons to mulch your garden:
a) Mulches suppress weeds when laid to a depth of around 6cm (but the mulch itself needs to be free of weeds).

b) Mulches stop soils from drying out as quickly by slowing evaporation. However they should not be laid on ground which is already dry because they will act as a barrier to stop water soaking in easily when it rains.

c) Some mulches will feed the soil and add valuable carbon content.

d) Mulches protect your soil from wind, torrential rain and erosion and may slow the leaching out of goodness.

e) Most mulches make a garden look much more attractive and reduce dust.

1) Pea straw is popular but when used in areas where peas are not grown commercially, it has a heavy carbon footprint in transporting it. It should be weed free. It adds carbon content to the soil but it is a myth that it fixes nitrogen (peas store the nitrogen in their roots but you are only buying the harvested tops of the plants). It is better in the edible garden, and great for strawberries, but not very aesthetic in the ornamental garden. A bale should cover about 6 sq metres. Water it well or the dry straw may blow away. Oat straw and barley straw are suitable substitutes. 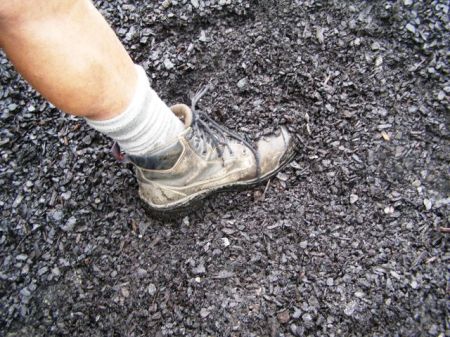 2) Composted bark is widely used and lasts a surprisingly long time. Compounds in the bark stop it rotting down quickly. It adds carbon over time, it should be free of weeds and it is visually discreet in the garden because it is dark brown. Buy pre-composted bark if you can – it does not rob the soil of nitrogen as it breaks down. You can buy small bags but it is cheaper in bulk. A cubic metre should cover about 15 square metres.

3) Leaf litter is readily available and free in autumn. You can either disperse the litter over the garden beds immediately or you can rake it into piles and let it start to decompose first. A leaf rake makes this task much easier than trying to use a garden rake. Leaf litter will enrich the soil but it may look a little untidy in some garden situations.

4) Wood chip, sawdust, and wood shavings are not composted so must be laid on top of the soil and never dug in until they have rotted. This is to avoid them depleting the soil of nitrogen as they break down. Sawdust or shavings must be from untreated timber (tanalised timber is toxic) and fresh sawdust can look garishly orange on the garden. We use the fine wood chip from our mulcher extensively, raking it out immediately to a layer of about 6cm. 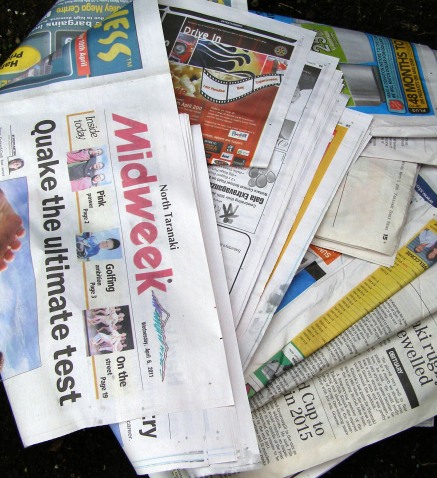 5) Old carpet must be natural fibre (generally wool), not synthetic. Test it with a flame – if it melts, it has synthetic fibres. Cutting with a Stanley knife is probably the easiest way to get manageable pieces. It may be best in the vegetable garden because it is not attractive. Lay it with the hessian backing side upwards and you can camouflage with leaf litter. Similarly, newspaper is not an attractive looking option, but it will work if you lay down a thick layer of maybe ten sheets at a time. Coloured pages are fine but avoid any glossy paper. It needs to be weighted down and covered with other garden litter to keep it moist. It represses weeds and adds carbon content. 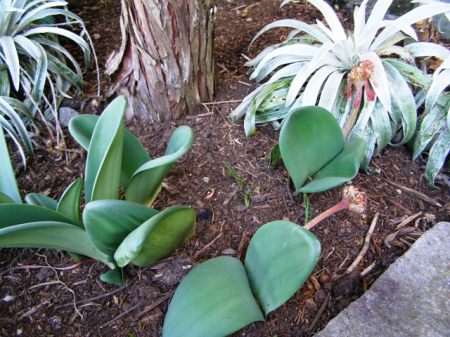 6) Compost is our preferred option by a country mile but if you are using your own compost, you need to make sure it is as free of weed seeds as possible. Compost adds most of the nutrients the soil needs and is excellent laid as a mulch on top. Let the worms gradually incorporate it into the soil. It looks unobtrusive while nourishing and protecting the soils. 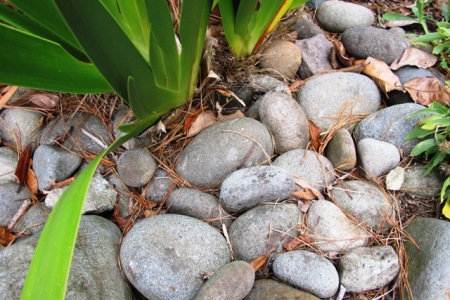 7) Stones are heavy to handle but can be visually effective in the right setting. They also store warmth for plants which prefer hotter conditions. They are best used with permanent plantings where the ground will not need to be cultivated (dug over) as you do not want to have to move the stones. Use a leaf blower to keep the build up of litter removed.

8) Limestone chip can be quite a stark white when first spread but this sometimes suits modern gardens. It is weedfree but it adds nothing to the soil. Once you have laid it on the garden, you will never get rid of it. Acid loving plants like rhododendrons and camellias will turn yellow because the alkaline lime will leach out. The same goes for crushed shell, which is also alkaline. The only way to keep these mulches clean and smart is to use a leaf blower to remove detritus.

9) Fine gravel and scoria are similar options. Fine gravel is a traditional mulch for rockeries and alpine plants because it is free draining and a neutral material. It can look a little industrial or utility in other settings. Scoria will give a decidedly retro 1970s’ look.

10) Weedmat is a commercial product designed predominantly for nursery use. It suppresses weeds and allows rain to penetrate while preventing excess evaporation. It should be laid taut and secured with wire hoops. It has no aesthetic value at all and looks uniformly unattractive when used in home gardens. It is at least better than its precursor, black polythene, which should never be used as a mulch because it sours the soil. Weedmat is bought by the roll and widths vary but it should price out around $1.25 a square metre.