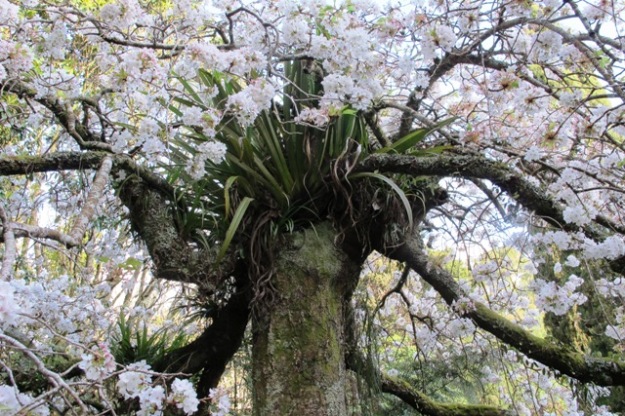 Trying to delve into the origins of flowering cherries of the Japanese types was far more complex than I expected so I will keep it simple and say that this is a hybrid, sometimes known as the ‘Yoshino Cherry’. This particular variety was named at the UK’s famed Hillier Nurseries because of its weeping habit and wonderful tortuous branches. Our mature specimen looks a bit like a rigid octopus and has a near flat top. Prunus do not have a long flowering season but while it is in full flight, it is a veritable froth of white single blossoms reputedly with a sweet almond scent but I wouldn’t buy this as a fragrant tree. Even when mature, it is only a small specimen – maybe four metres high and about the same in width.

The rather odd effect of the native epiphyte, Collospermum (probably hastatum) looks like tuft of hair poking out of the centre. These flax or astelia-like plants are sometimes referred to as the perching lily or, less romantically, widow-makers. That is because they can be large and heavy and have a habit of eventually falling out of the tree. Other than that, they do no harm.