The hunt dogs! Or hounds, I have just been informed (see reader comments below). Indubitably hounds. Out for a morning run on a Devon lane with their keepers on bicycles. Beautiful hounds, so very well trained and an interesting scene but still incomprehensible to me. English garden media personality and writer of steamy romantic novels, Alan Titchmarsh, may defend foxhunting on the grounds that it is, apparently, a traditional part of country life – country life, that is, as experienced by the toffs who cry ‘tally-ho’, not so much a traditional pursuit for the peasantry. But tradition alone is not a justification for anything, really.

It was interesting to be told elsewhere that the keeper of another pack of hounds had recently resigned because, he told my informant, he was worried by how often he was expected to break the law. Apparently, foxhunting may just have become more covert and is sometimes justified on the grounds of an upsurge in the population of foxes. Hmmm. The failure to institute other, more humane strategies of population control is a dubious justification for a savage method of hunting a terrified animal to the point of utter exhaustion and then letting it be torn apart, all for the pleasure of privileged humans who regard it as “sport”.

The Devon roads can be notoriously narrow, though they are by no means alone in that. These roads can carry more traffic than the upgraded, single carriageway that passes by our place at home but there does not appear to be an uproar with loud demands that they be widened, straightened and allegedly made ‘safer’ for cars and trucks. It means drivers must be fully alert, dropping speed to meet the conditions, courteous and capable of backing up to the passing bays that are dotted along these roads. It is a very different ethos to the aggressive driving on New Zealand roads. If we were more defensive, tolerant and patient drivers, maybe our corner of the world would be a better place?

We went to south Devon to have another look at one of our all time favourite gardens – Wildside. More on this garden in a future post, but it is on the edges of Dartmoor. It rained on our day there, though fortunately it was not cold. There is a certain evocative gloom to the open moorland on a grey day with low light levels. Because I have always done my reading from across the world in New Zealand, the geographic location of different moors is hazy at best (though I think I have the heaths and heathers of Scottish moorland separated in my mind). I kept thinking of the likes of Daphne du Maurier but I see she set ‘Jamaica Inn’ on Bodmin Moor which is the next one down and Dartmoor belongs to ‘Hound of the Baskervilles’. But one can imagine this landscape with the bleak winds of winter blowing across it and it certainly has its own identity, including the roaming stock and lack of fencing. 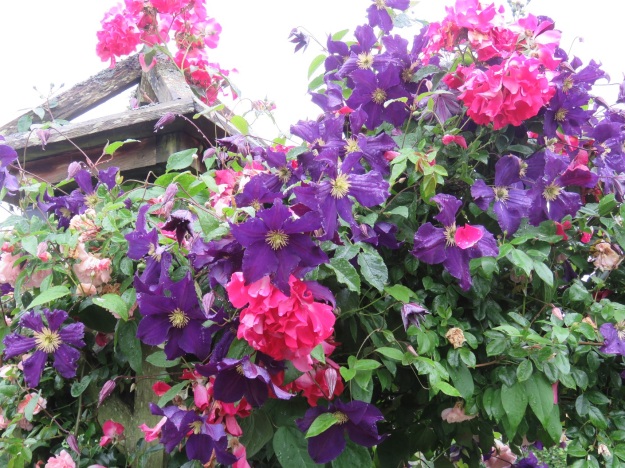 While in the area, we headed over to see the RHS garden, Rosemoor. The original garden and accompanying land was gifted to the RHS by Lady Anne Berry, now a long-time resident of Gisborne. Lady Anne had been particularly kind to us in our earlier years so we were pleased to finally get to see Rosemoor. While the traditional rose garden left me unmoved, the rose and clematis combinations in the adjacent garden enclosure were a delight.

I make Mark pose for vanity photos beside what we call ‘Jury Plants’ as we come across them around the world. Part gentle boasting, part family record. In this case it is Phormium ‘Yellow Wave’, bred by his father Felix and one of the first generation of variegated flaxes for home gardens. He never received a cent for it (or a penny, as it would have been back then) and is rarely credited with it. It is not easy to keep good foliage on phormiums in New Zealand so Felix moved on to astelias and then clumping cordylines in his attempts to get an extended colour range into plants with this habit of growth and foliage. Eventually, this led to our Cordyline ‘Red Fountain’ but Phormium ‘Yellow Wave’ continues to hold some ground internationally.

Still at Rosemoor, the herbaceous plantings are terrific. If you are looking for a middle road between the traditional herbaceous border and the grassy new wave look of Oudolf, Stuart-Smith and New Perennials proponents, you probably end up with something closer to these Rosemoor beds and borders. Lots of vibrant colour and care with combinations, often quite tight colour toning but also lighter on plant options that need continual maintenance to keep them flowering and looking good. However, these are herbaceous plantings for large, public spaces, not so much for downscaling to the home garden. You can see more in the album on our Facebook page if you are interested. 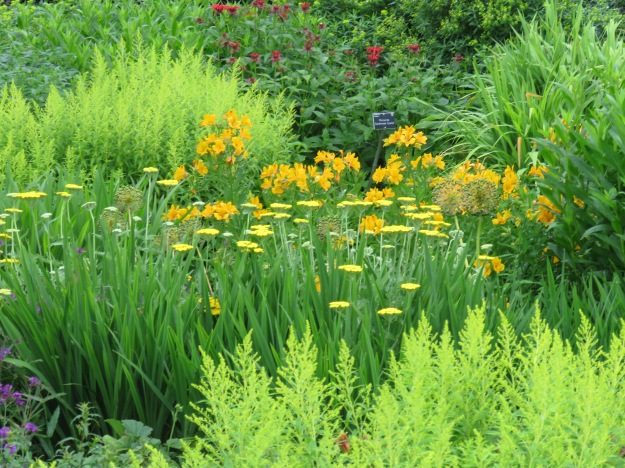