* That is a flurry of feathers as opposed to a tranquil haven filled with bird song.

Some dreary weather and the need to find the best photos we have of our garden had me trawling through and sorting all the many photos on my computer. I was quite pleased with the bird file and in an act of displacement behaviour (because the more urgent task was far more difficult) sorted some out for here. 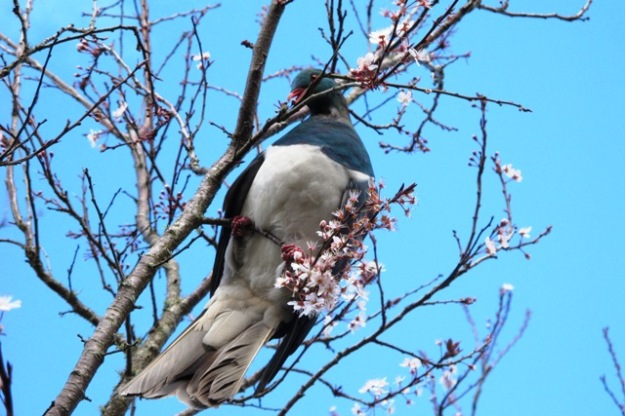 Photographing our native kereru (New Zealand’s wood pigeon) can be a challenge because they are inclined to take fright and crash away. This large bird is protected these days and is slow to procreate.

Mark has been known to erect hammocks beneath a precarious kereru nest to protect the growing baby (kereru usually raise only one young at a time), and to build a large ground enclosure to save one which was learning to fly from ground predators.

The morepork or ruru is our native owl and is rarely seen by day. This was almost certainly a young one. A morepork calling is one of the loveliest night time sounds. One of the most delightful sights we have seen was a family of five roosting in a tree here during the day. Mama and Papa Ruru were trying to sleep and three babies with big owl eyes were all bright and alert.

Sadly this one was lying dead beside our letter box last week – almost certainly coming off second best from an encounter with a vehicle at night. 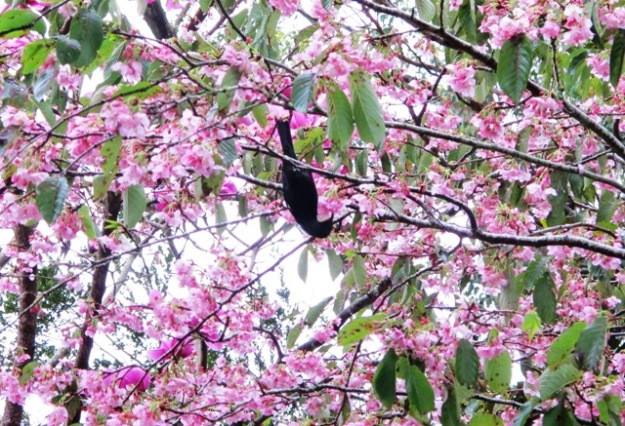 I have spent a great deal of time photographing the tui. There is no shortage of candidates – we can have trees heaving with scores of bickering tui – they are strongly territorial. 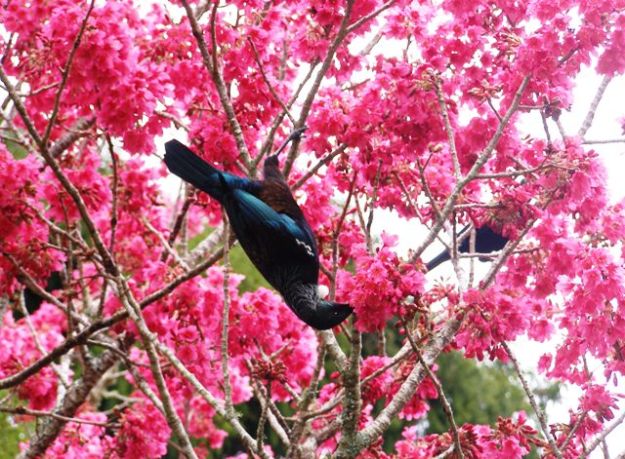 And acrobat tui number two. Feeding upside down is no problem to these nectar feeding birds. 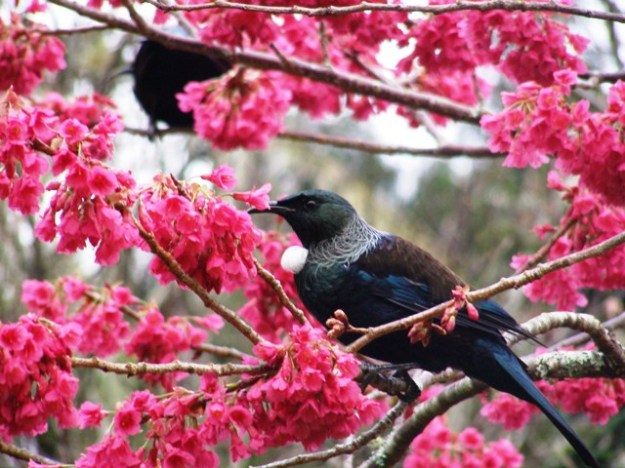 King tui, we call this one. He looks as if he is the dominant bird in this campanulata cherry. I posted two short clips of feeding tui last spring here and here.

Bellbirds, often known by their Maori names of korimako or makomako, tend to be heard more often than seen. They are a modest bird to look at and very shy in their behaviour, but with beautiful song.

One of our most ubiquitous birds is the little fantail or pīwakawaka. The tail spreads out in a full fan and these little birds do not show a great deal of fear around humans. However they also move extremely quickly and this is the best photo I have managed so far.

The little waxeyes are here in large numbers – almost our equivalent of humming birds, which we don’t have in this country. Because it is self-introduced to this country, it is regarded as a native. Wikipedia says: “ Its Māori name, Tauhou, means “stranger” or more literally, “new arrival”.”

The Californian quail are a more recent arrival to our garden but are a quietly delightful addition. Each spring we watch nervously as Mama Quail heads off with a gaggle of little babies in tow – each of them a tiny bundle of feathers. Up above we can see Papa Quail and hear him calling. We like to think he is cooing out directions: “Turn left.” “Veer right.” “Danger ahead.” Sadly, we then watch an ever-diminishing number of fluffy babes as each day passes. But this winter we have seven mature quail quietly foraging around so maybe they are going to be a permanent feature.

And Mark’s pidgies – tumbler pigeons these days. He likes the coloured ones rather than the white ones more commonly favoured. There are times when he feels he is raising fodder for the rare, endangered native falcon or Kārearea which makes frequent feeding forays through this area. The surviving pigeons are the wise ones. 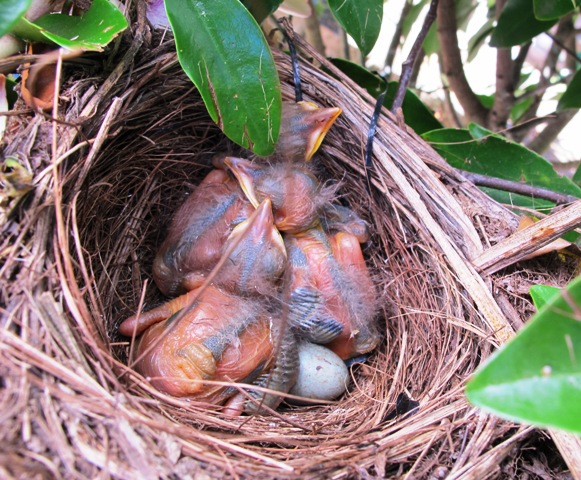 Just common old blackbirds in a nest last season – a nest in a particularly public position – but the sight of babies brings out the protective instinct all the same. They all matured and flew away – probably to thieve our strawberries.

Then there are the nests. This one is an exquisite little fantail nest built in a fork of a magnolia tree.

Each year we gather the abandoned nests which are in good condition and bring them under cover – our nest installation. Each spring the birds fly in gradually demolish them in their search for nesting materials – recycling in action.

And my most favourite tui photo of all. Sitting in a mandarin tree out from our back door. It was gorging itself on the fruit. We no longer have a cat and none of our immediate neighbours have cats. We would rather have the birds.

Our New Zealand owl, morepork or ruru does not often make itself obvious during the day but the alarmed calls of the other birds alerted us to Hedwhig perched in a ponga tree. Alas his beautiful big golden eyes are not visible but he was keeping a very close eye on our dogs three metres below him. They are a familiar sound at night as they make their call (“More pork, more pork”, they call with a particular pitch) and from time to time we see the flash of feathers as one swoops in to pick the moths attracted to night time lights.
Hedwhig – a New Zealand joke, or maybe even a highly specific Whanganui reference.