In times gone by, we used to retail plants from here seven days a week for much of the year. My Mark was a reluctant retailer at best, though his plant and gardening knowledge is immense and he was perfectly capable of giving good advice if he liked the visitor. Alas, too often he would comment wryly: “That was one who put the cuss into customer”. He certainly never subscribed to the view that the customer is always right.

The mere mention of viburnums sends a shudder down his spine, even after a fair few years. A couple came in asking for Viburnum plicatum ‘Mariesii’ which they had seen growing in a prestigious garden. Mark checked that they understood this was a white lacecap variety and they assured him they knew what it was. Turned out they had no idea at all. Some time later, when the plant came in to flower and was not the common white snowball bush, the husband dug it up from the garden, put it in a supermarket bag and brought it back wanting a refund. He’d probably only paid $15 for a big plant of it. It was of course correct to its descriptive label (we take pride in such matters) and a fine specimen but it just wasn’t what he thought it would be. It is a bit like opening a packet of lollies, tasting one and then expecting to return the open packet many weeks later because you didn’t like the flavour.

I felt sure ‘Mariesii’ should be in flower for me to photograph – it is a beautiful big white lacecap flower on a large shrub with fresh green, pleated foliage and it tends to grow in layers like a cake. Mark and I agreed we must have it planted somewhere. We just can’t quite remember where. That is the problem of a big garden lacking records. It will have to wait in anonymity until we stumble over it again.

What started me thinking about viburnums were two plants which are looking particularly striking this week – ‘Roseace’ and one with the difficult name of V. sargentii ‘Onondago’. It took me a while to commit the second name to memory.

‘Roseace’ (sometimes ‘Rosacea’) is the pink form of the classic pompom viburnum, which is usually the form known as V. plicatum ‘Sterile’, or the Japanese snowball. It is a sport which was sold widely two decades ago and it forms a large, deciduous shrub to over 2 metres tall with an abundance of pretty, peachy-pink snowball flowers. That is at its best. Being a sport, it can revert to the more dominant white. We found this to our cost when we propagated a fair number from our main plant and then had to wait until they all flowered because only some of them came pink. Mark went through the original plant and pruned out all the white sections a few years ago but I see it is rather patchy pink and white again, though nevertheless very pretty and showy. 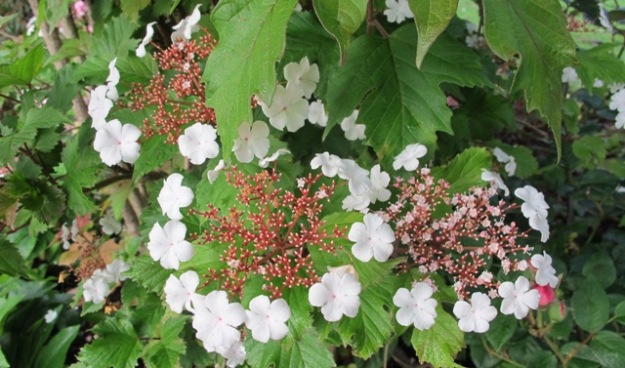 ‘Onondago’ is different, being narrow and upright. Its fresh spring foliage comes out deep maroon and lacecap flowers (like flat hydrangea blooms) have the tiny fertile flowers in deep red in the centre, surrounded by a ring of larger white sterile flowers. It is a selection out of the US National Arboretum in Washington and, being a seedling not a sport, it is very stable.

Viburnums come from a large family with over 150 different species identified. Most are from the temperate areas of the northern hemisphere so are generally hardy and are of the shrub/large shrub/small tree type. There are evergreen, semi evergreen and fully deciduous species. I am pretty sure it was the evergreen V. tinus I saw grown quite widely throughout Hamilton making a small tree that flowers in spring.

Balls of delicious fragrance from one of V. carlesii hybrids

Earlier in the season, we had the somewhat short-lived delight of the waxy, fragrant balls of a couple of different ones. I am pretty sure they were ‘Anne Russell’ and x carlcephalum – both are hybrids from the Korean species of V. carlesii. We have them planted beside the driveway and the scent is easily as strong as a good daphne with more spectacular flowers, though their season is much shorter.

Most viburnums are very easy to grow, being not at all fussy about soils and conditions. They are a bit of an unsung hero, really, making good backbone plants which star when in flower and behave themselves for the rest of the year. Some of the deciduous varieties also give good autumn colour in inland or colder climates.

Just try and find out what you are buying before you plant it and don’t expect to dig it up and return it bare rooted because you made a mistake. Mark might have been more understanding over the ‘Mariesii’ had the customers been a little less know-it-all at the time of purchase. Instead he was intensely irritated, scarred now by the memory.