Washing lines! These continue to be seen as essential for most New Zealanders, although they are apparently banned in a number of urban areas in the USA as inappropriate for public view. As urban apartment dwellers are limited to clothes driers or folding clothes racks, those of us with sufficient outdoor space for line drying should perhaps count our blessings.

1) This is my own washing line, dating back, I assume, to when the house was built in 1950. I like the giant bamboo prop we use to hold it up. I think it is what Kevin McLeod of Grand Designs would call “honest” or maybe “unpretentious”. Old fashioned, certainly, it offers excellent drying but you do need space and you have to walk up and down it rather than standing in one spot to peg and unpeg. 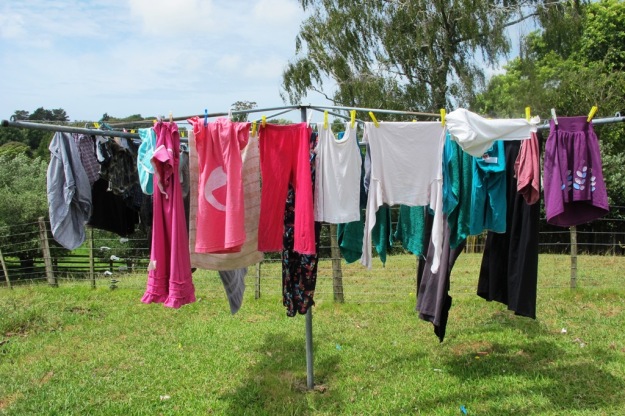 2) The rotary clothesline, often referred to as the Hill’s Hoist, is an Australasian phenomenon which features heavily in suburban backyards of both Australia and New Zealand. There is no doubt it is practical but it also lacks any aesthetic at all. Is there a sadder sight than a barren backyard with nowt but a weed infested area of broken concrete and a Hill’s Hoist washing line? 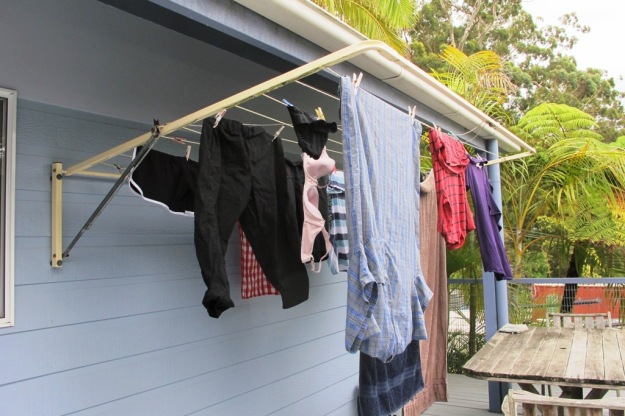 3) Presumably in an attempt to hide the heavy visual presence of the Hill’s Hoist, there seems to be strong interest in wall-mounted lines which can often folded down discreetly when not in use. I would guess this one was advertised as having 20 metres of line space (10 wires by 2 metres each) but it isn’t really 20 metres of usable space and it won’t hold large sheets without folding them in on themselves. It lacks the air circulation of the first two options so will not offer such efficient drying but the wide eaves give some protection from rain.

4) For property-proud people, the service areas needed for a household may be screened. Here the washing lines join the Sky dish, heat pump units, and probably the wheelie bins and recycling bins. The trade off is the reduction in sunshine hours on the shaded side of the house as well as reducing the air movement which dries washing more quickly. I have seen this done in a small garden but the screening was much closer to the washing line which created more shade and reduced air movement even further. Keep some distance if you can.

5) As a D.I.Y. compromise, I photographed this fixed line which is free standing in full sun but softened by the frames at either end which are wreathed in a flowering climber – one of the solanum family but I am not sure which one. Paving beneath gives reflected heat and keeps fallen items cleaner. This is the best example I found for a town section where the owner wanted a more discreet but still efficient washing line. It also took the award for the prettiest clothes line I found.

6) I spotted this line on a large country property where winters can be a little cold and bleak. It is under cover but the roof is high. It incorporates screening from view without sacrificing air movement. It is on a property with accommodation units and the owner told me there was sufficient line space to hang all the washing from the four units. She loved her washing line and, where space allows, it struck me as remarkably practical.