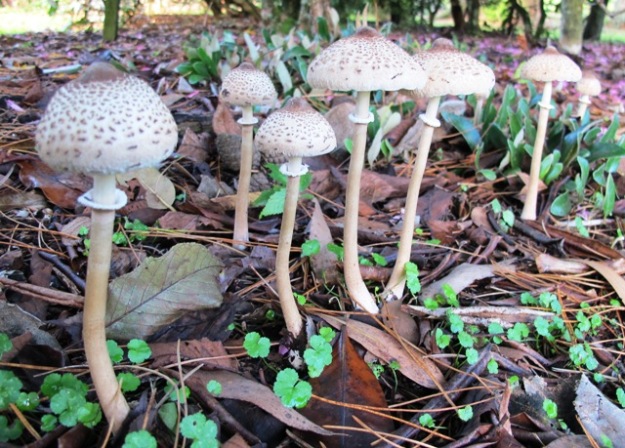 A parasol mushroom, though not, I think, the popular edible shaggy parasol

Fungi are very curious growths. Each autumn I find myself taking a few more photos of exotic looking fungi and wishing I knew more about them. It turns out that there is a whole lot to know about them – the potential for a lifetime of study, even. I lack the rigour let alone sufficient years ahead so I have to make do with random facts.

We have a culturally instilled fear of odd fungi in this country – anything other than field mushrooms really – and this even has a name: mycophobia. This may come from our predominantly British forbears although, curiously, it appears that the traditional Maori diet did not include fungi as a staple food. I even found an article which talked about “the new science of ethnomycology” which, lest you wonder, is the study of attitudes of different ethnic groups to mushrooms. Apparently the Russians are the greatest mycophages or lovers of mushrooms and they recognise over 90 different edible wild varieties*. If we lived in France, we would be able to pop along to our local pharmacist to have our foraged fungi identified but such expertise is rare indeed in our country and foraging is actively discouraged.

In fact very few wild fungi are scarily toxic. We have the death cap mushroom in this country but it is quite rare. That said, it has been recorded beneath oaks and chestnuts in both Hamilton and Cambridge. You have been warned! Amanita phalloides is common in Europe in their woodlands and even very small quantities are deadly. Apparently it smells quite sweet and can be confused with the straw mushroom which is widely harvested in Asia. 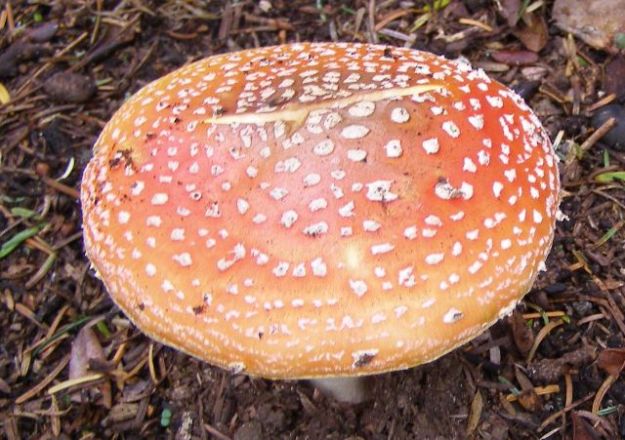 However the scarlet flycap or fly agaric (Amanita muscaria) is relatively common and we have it in our own garden here. It is one to be cautious around, certainly with children, because it has been immortalised in all sorts of ways from Alice in Wonderland to gnome gardens. My understanding of toxicology is nil but I suspect the hallucinogenic varieties are often categorised with the toxic ones. Certainly this one is hallucinogenic, as a number of fungi are. It may be toxic as well, though as its use has been traced back to Ancient Greece, it doesn’t seem to be fatal. The consumption of hallucinogenic mushrooms has a rich history through many cultures and religions and there are suggestions that controlled usage may have been a factor in some well-recorded religious visions.

The scarlet flycap is not what is commonly referred to as the Magic Mushroom in this country (it is much more anonymous in appearance) but I am not going to go into details on that one. The banning this week of synthetic highs may see a return to wild collections, with all the inherent risks.

I thought I had photographed the wood-ear jelly fungus (Auricularia cornea) but I couldn’t find it. It is a flabby grey affair, a bit like bull kelp in appearance and was the source of a thriving export industry to China, back in the 1800s. I think it is safe to assume that one is both easy to identify accurately and edible but I admit I haven’t tried it yet.

Given that I buy dehydrated fungi of both European and Asian origin for use in cooking, maybe it is time I overcame my cultural mycophobia and set about learning which ones are edible in my environment. Instead, I just enjoy looking at the brief appearances of a host of different fungi around the garden, most here being related to the entirely natural process of the eco-system and the cycles of nature. Just as very few are deadly poisonous, few too are those so pathogenic that they will kill their hosts. Most are beneficial and some are highly decorative.

No wonder Alice declared matters becoming “curiouser and curiouser” after nibbling on the scarlet flycap mushroom. It applies equally to the fascinating wider world of fungi.

A bracket fungus, though which one we do not know

Our identified woodland mushroom in a fairy path

1) Paradise Found in New South Wales– or our attempts to find gardens to visit around Sydney from bats at the Bot Gardens to Bob Cherry’s dreams in Kulnura.

3) Garden tasks for the week as autumn marches on inexorably. Still, we have only had one really cold day so far.

Tikorangi Notes: Saturday 23 April, 2011 When it comes to wild fungi in New Zealand, we are terribly conservative. Generally it is only the field mushroom that is harvested for eating, although the magic mushroom used to attract experimental youth in search of a free hallucinogenic experience. Possibly it still does, but there are a host of other wild mushrooms that go untouched. I have bought the up to date publications on fungi found here, but it appears that nobody has done the work on which forms are edible. I am not so keen on doing the experimental taste test. Apparently the basket fungi, puffballs and elephant ear fungi are all perfectly safe to eat, but I want a definitive tome to tell me which are safe and delicious before I get adventurous. With death caps also common, the gap between fatal and edible seems a little too small to me. And we can’t even get an identification on this woodland fungi from our books. Cascading down through our tawa bush, these mushrooms are currently abundant and growing, not so much in a fairy ring, but more akin to a fairy path.