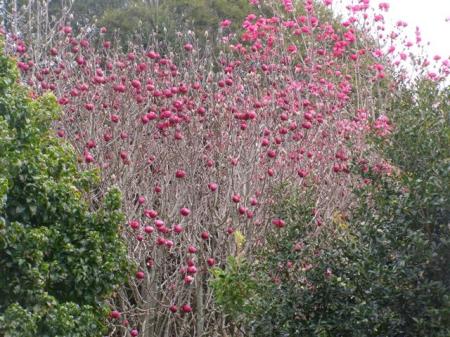 At this time of the season, it is all the dark magnolias coming into flower. The only other colours we have are the soft pink campbellii and one early pink and white seedling which has been left in situ because it provides a contrast to the wine red, purple and deep rosy colours coming out all around the property.

Black Tulip is opening more flowers every day. This one has caught us by surprise with its instant popularity in the market place. Mark named it because the flower, while not large, had such a lovely tulip form and very heavy, dark petals which gave it good weather hardiness. And it is never going to become an enormous tree. The original plant never throws a pale flower so we were disconcerted to see that pale flowers can appear on trees in other locations. While we accept the occurrence of both dark and light flowers on Lanarth, modern hybrids are expected to be uniform.

If you line up a Black Tulip flower beside a good Vulcan flower, there is not much difference in colour. What makes Black Tulip appear so dark on the tree is that the petals (or, more correctly, tepals) are so thick that no light can shine through. 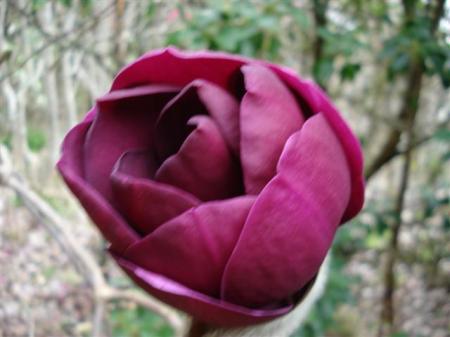 We usually advise people to plant Black Tulip in locations where it is to be viewed close up. In the landscape, the flowers can be so dark and relatively small that they tend to meld into the environment whereas viewed close up, it has certainly captured the imagination of the public. It is being trialled as a street tree in New Zealand and we recommend it for driveways, lawn specimens or back of the flower border in home gardens. On a very recent visit, we were gratified to see it as a flagship plant for John Woods Nursery in the UK and to hear that it is performing better than Vulcan. It appears that the British public are as charmed by the perfect flowers as the New Zealand public and can see it fitting into smaller, modern gardens.

But on a larger property, our personal tastes lean to something more over the top and flamboyant which has maximum wow in the landscape – Felix Jury is opening its flowers.