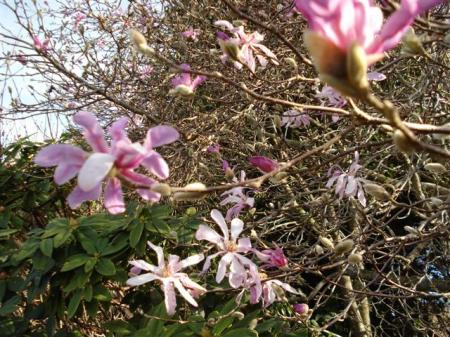 Our magic early spring weather continues (and believe me, we never take the absence of both wind and rain for granted here) and more magnolias open every day. Leonard Messel is showing his first flowers. Leonard is sold as a small growing magnolia in this country, to be planted perhaps where something shrubby rather than a tree is required. So we were amused to pace out our plant which is only about 20 years old at the most and to find that its footprint is not a lot smaller than many of our substantial magnolia trees. It is just shorter in stature so it looks smaller but it still measures nigh on nine metres across. Leonard Messel looks splendid on its day when in full flower, but the petals and form lack much substance and in a windy climate such soft characteristics mean it can start to look rather raggy.

One of the early flowering Snow Flurry series

Michelias have been the subject of an intensive breeding programme here for some time now and the early whites are all coming into flower. Botanically michelias have been reclassified as magnolias, but we admit that for clarity and understanding, we lean towards calling them michelias in conversation. We refer to these early whites as the Snow Flurry series and while we can not post a photo of the one we have selected for probable release, we have shelter belts full of the also rans, or rejects. Indeed we have so many that Mark now calls them his sustainable woodlot as he chainsaws off branches to feed our small (very small in number but increasingly large of size) herd of beef cattle to get them through the shortage of late winter feed. Coppiced michelias – these may be a first. 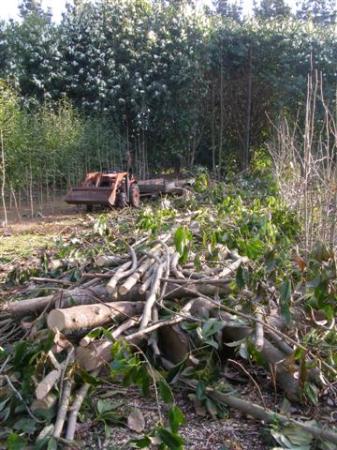 Besides Lanarth and campbellii, it is the also rans in the deciduous magnolias which are the most spectacular today. Too good to chainsaw out but not quite good enough to put into commercial release, we have a run of what Mark calls his instant campbelliis flowering around the boundaries. Instant because they flower on very young plants (it can take many years for campbellii itself to flower), but this strain of magnolias bloom too early in the season and the trees grow too fast and too large for modern gardens. It is likely that they will remain forever in our shelter belts and on our boundaries where they can look splendid for us.