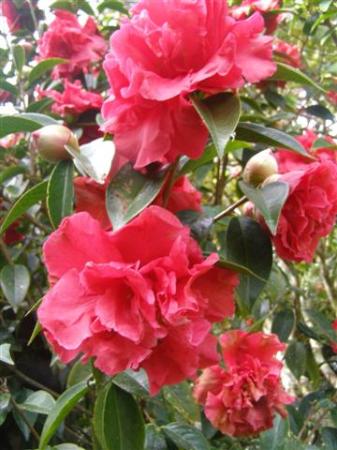 The reticulatas, in this case Glowing Embers, are good value in the garden, despite the ravages of petal blight

In years gone by (that is, in days pre-dating rampant camellia petal blight), now would be the time when we would be enjoying mass flowering in the japonica camellias. That has gone. But the reticulata camellias have come into their own. Because most are red, petal blight does not show up as badly and with such huge blooms, the spoiled flowers fall cleanly to the ground. And they still mass flower for us, even if we measure their flowering season in weeks, not months. Reticulatas have become hard to source these days. Few grow on their own roots so they have to be grafted and in this day and age, that is a skill which has all but died out. Most buyers can’t tell the difference between a grafted plant and one which can be mass produced with little skill and great ease so they don’t understand why the former plant should be so much more expensive than the latter. It is a good argument for home gardeners learning the more advanced skills needed to produce these plants at home for themselves. Most of the retics in our garden were grafted by Mark’s father Felix, back in the 1950s and 60s – now they are small trees. 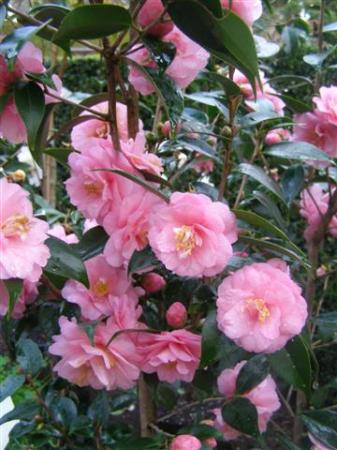 Spring Festival - pretty as a picture

The other group of plants which continue to last the distance in the garden are the miniature flowered varieties, both hybrids and species. Any miniature flowered variety worth its salt should have masses of buds and flowers so it doesn’t matter if petal blight attacks after two or three days because there are so many fresh buds opening and individual blooms rarely last longer than a couple of days. Spring Festival is an American hybrid registered 35 years ago but I wish it had been one of ours because it is as pretty as a picture – a particularly pretty shade of pink with an attractive flower form, plenty of flowers, good pillar growth and a pleasing glaucous cast to the leaf colour. Camellias are a bit like roses – far too many are named and registered and don’t stand the test of time but a few last the distance.
It is also clear that in terms of garden appearance, red camellias are a better bet than pale ones when it comes to petal blight. The reds do not look anywhere near as unsightly in the early stages when the blooms are showing speckles of brown.
Camellia minutiflora is just starting to open. It is a gem of a species with very dark foliage and dainty flowers. We have put a hold on most of the plants in the nursery as we ponder its suitability for formal hedging.