Latest posts: Friday November 19, 2010
1) The romantic Moorish gardens of Andalucian Spain and the likely debt to it shown in modern, western gardens – Abbie’s column.
2) Manfreda maculosa – an herbaceous plant with a singularly dramatic flower spike topped with a rather anticlimactic flower.
3) Tasks in the garden this week include getting swan plant seeds sown without delay. 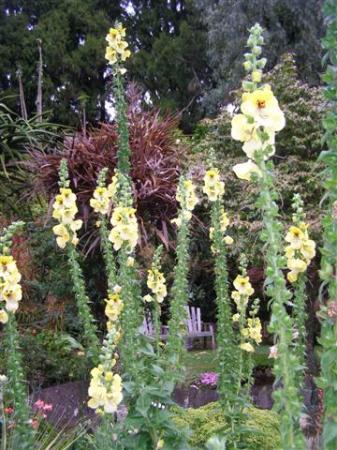 A particularly good verbascum for our conditions

Drought is a relative matter. About three weeks without significant rain here and farmers are already fearing drought while gardeners are worrying about the dry. A light volcanic soil does not help because it dries out quickly but our rains are usually so predictable that we never have to water the garden. I have been pottering in the rockery, excavating a highly decorative but dangerously invasive equisetum (horse tail rush). A mere ten months or so and it was already making an escape for it, including between the rocks. Plants that burrow underground and pop up some distance away can be unnerving but the speed at which this equisetum was doing it indicated downright dangerous tendencies. Strictly one for a pot, I think, and even then it may be on borrowed time. The rockery is looking more like a cottage garden at this time of the year. Most of the spring bulbs have finished flowering but the splendid large flowered yellow verbascum (name unknown) gives some presence and height in November. One or two plants are left to set seed each year and it conveniently perpetuates itself.