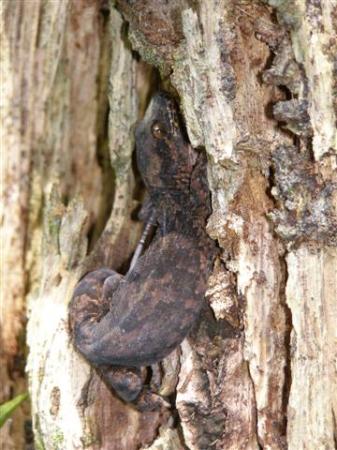 Spot the gecko - a rare sight in New Zealand

As we sat outside having our morning coffee last Sunday, Mark commented that he had counted five native wood pigeons in the gum tree. Now there is nothing unusual about one or two kereru around here but five is close to a crowd for these birds who do not make a practice of hanging out together. As we watched, another two or three flew in to join them, followed by more, and then some. And but wait there were still more. We ended up with fifteen of these large and cumbersome but beautiful birds in our gum tree. A convention, we decided. They must be having a convention of local kereru. These are not birds renowned for having great brains and clearly their concentration spans are of short duration because they soon decided that it was time to break for morning tea. They flew over, more or less as a flock, to sample the offerings on the karaka tree. A quick snack and it was time for a field trip to a nearby pine tree from where they gradually dispersed. It made for a memorable coffee break.

Our native wood pigeon or kereru in the Ficus antiarus

As far as we know, our kereru stick around the area all year. Give them enough to eat and there is not a lot of point in them moving on. If you do a search for plants to grow for kereru, most sites list native plants including puriri and miro and only give exotic or introduced plants as an afterthought. But, like most of our native birds, kereru are untroubled by political correctness and they browse widely. They are gloriously untroubled by whether the food is nasty privet berries or nikau seeds. All that matters is that they are herbivores so they eat berries, seeds, fruit, flowers and leaves. In late autumn they come in close to eat the apple leaves just before leaf drop at a time when the sugars are concentrated. They are very partial to guavas and, apparently, to plums. Mark has watched them eating the kawakawa (pepper tree) berries, they raid the karaka tree, the flowering cherries, kowhai blossom and a host of other food sources. Being large birds which tend to crash land rather than being light of wing and foot, they feed from trees and shrubs which can hold their weight. You don’t see these birds on the ground, so they are not going to feed from annuals or perennials.

The delight for Mark this week was to find his first ever live gecko in the garden. In fact he has only ever seen one dead one before and that was in his glasshouse. In the lizard family, New Zealand only has skinks and geckos – the former are relatively common but the latter are rarely sighted. This particular gecko was presumably trying to warm itself on the trunk of a very old pine tree. Now that we have our eye in for this extraordinarily well camouflaged creature, we have found it out sunbathing in the same spot each day since so it is presumably resident. It now has to get accustomed to Mark bringing every visitor to stare at this rare sight and to make admiring noises even if they can’t tell it apart from the pine bark.

We did a bit of a Google search on NZ geckos which appear to be devilishly difficult to research and photograph, complicated by the fact we have a large number of different species. Ours was indubitably a brown one and on the larger side, something similar to Hoplodactylus duvaucelii. But it is just as likely to have been one of the other 38 or so different types already recorded.

Monarch butterflies we have in abundance here. Judging by the search terms which bring people to our websites at this time of the year, others are equally enthralled by these ephemeral beauties. I keep seeing questions typed in to Google like: how many monarch caterpillars can a swan plant support (depends entirely on the size of your swan plant…) and how long does a caterpillar take to grow (about three weeks). Can a caterpillar chrysalis on something other than a swan plant was another much searched question. The answer to that is yes, definitely, and it pays to encourage them to do so by poking in some bushy twigs by the plant. Having them chrysalis on the swan plant itself can be a real problem if their very hungry younger siblings munch right down the bare stems and the defenceless chrysalis then falls off. At this time of the year, earlier generations have often hammered the swan plants for food and newer caterpillars are running short. You can finish growing caterpillars on sliced pumpkin but it is not a complete food so it is unsuitable for getting very little ones through their weeks of growing.

Swan plants grow readily from fresh seed and if you are even halfway serious about wanting monarchs in abundance next summer, sowing a row in your vegetable garden in very early spring is a good means of getting the plants to a well established grade for later season egg-laying butterflies. Swan plants are generally biennial (so last two years) but they don’t like heavy frosts. This year’s plants can recover to support the first of next season’s caterpillars with the early spring sowing as a back up for later generations in the season. However, you do have to keep the young plants netted to stop them being stripped while very small. Letting some annual flowers seed down in spots of the vegetable garden can also provide food for the butterflies.

Food for the butterflies - a rather garish cosmos

They need single flowers with visible stamens such as cosmos, marigolds, zinnias, daisies and poppies. A visitor stood in one of Mark’s vegetable gardens recently and suggested that it was not so much a veg patch as a mixed cottage garden.

The final word on the monarchs this season comes from one of our neighbours with whom we have had a running joke over time about stealing our monarch butterflies. Send them home, we have said. All the monarchs in this area are ours. Added Mark recently: please stop taking pot shots at our wandering monarchs. Ah, said neighbour riposted, those are the very rare and highly prized lacewing or whistling monarchs – the sound of the wind blowing through the holes in their wings. What more could we say?

2 thoughts on “Wildlife in the garden – New Zealand style”