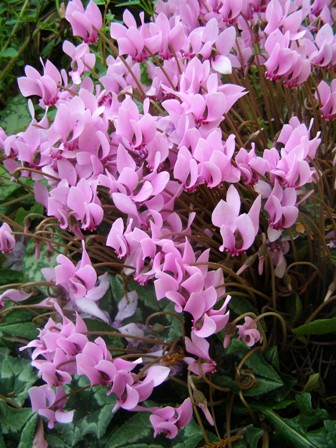 A somewhat over the top performance from just one Cyclamen hederafolium tuber, albeit a large and well established one

Tikorangi Notes: Sunday, May 1, 2011
Another weather bomb last week (as we seem to call extreme weather events these days) had people drawing comparisons to the infamous Cyclone Bola of 23 years ago (I can date Bola because it coincided with the birth of our son) but it was not of that magnitude here. Still, tearing winds for two days blew over pretty well every plant in the nursery, snapped a large branch off a prunus which blocked half the road (surprising how long it took for anybody to tell us that our vegetation was a traffic hazard!), snapped a large branch from one of our old man pine trees and generally dislodged anything that was loose. A friend down the coast tells me it wrecked about 20 trees in his garden so we are guessing it was worse elsewhere. Now we are into clean up mode but calm, clear weather has returned. There is not a lot of autumn colour remaining after the winds, but the Cyclamen hederafolium continue to flower. This particular tuber is undeniably large but its production of blooms is so excessive that we have been making jokes about it being on steroids. There is no human intervention, however. It is just hellbent on outdoing every other cyclamen in the garden.