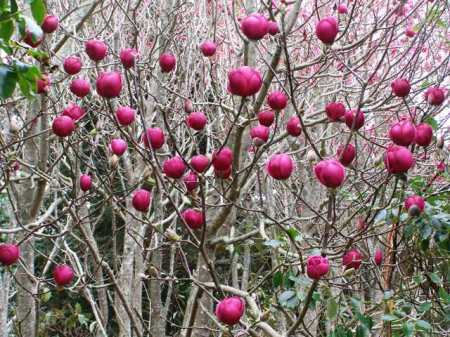 News this morning, via The Telegraph complete with short video, that our very own Magnolia Black Tulip was the tree selected for a ceremonial planting by Burmese opposition leader and Nobel peace laureate, Aung San Suu Kyi in the company of Prince Charles and the Duchess of Cornwall. The planting took place at the Prince’s London residence, Clarence House. Black Tulip is now sited adjacent to a magnolia planted previously by the Dalai Lama in 2008.

Magnolia Black Tulip was bred here at Tikorangi by Mark. Last year, the Queen herself was given a presentation of Black Tulip, though it looks as if the Clarence House specimen may be slightly larger.

We are honoured by this international recognition, though Mark would have preferred them to have planted his Magnolia Felix instead.