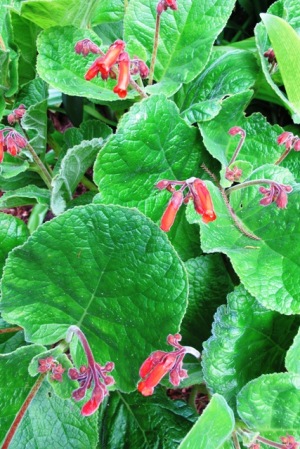 The tuber in growth. I have cut chunks from it to grow new plants.

Gesneria or sinningia? We have always known it as a gesneria but it appears that Sinningia cardinalis is equally valid as a name. Whatever, this is a comparatively rare plant which comes from the same family as both African violets and gloxinias – the family having the near unpronounceable name of Gesneriaceae. Most hail from South America and cardinalis is from Brazil.

Unlike most members of the family (and there are somewhere over 40 of them), cardinalis grows from a tuber which pushes itself above the ground. We have described it in the past as developing a football-like tuber, but with the passage of time, ours are getting closer to exercise ball in size. The leaves are soft and somewhat hairy while the tubular red bells sit above the foliage and flower over a long season in late spring. Come autumn, all the leaves will fall off. This is a plant for dry shade but needs to be frost free.