Tempted though I am to show some of the worst excesses of garden ornamentation I have photographed – and believe me, naff does not begin to describe some – I thought it better to be kind than cruel. This week it is understated decoration which blends into the garden surrounds rather than dominating.

1) These are the work of potters Lynn and Mike Spencer, spotted in their own garden. Mike called the long-necked pieces his “African ladies’ for reasons that are obvious as soon as it is mentioned. The penguins are undoubtedly engaging, all the more so for being hand crafted and not mass produced. I particularly like they way these nestle in the foliage, adding subtle detail and delight, rather than being placed on a plinth or stand to become a lonely focal point.

2) Te Popo Garden also features pottery, this time by Nick Brandon. What I like there is how they have grouped related pieces closely together. Each on their own would be small and likely to get lost or look bitty. I once suggested grouping to a gardener with a large selection of bright, shiny blue glazed pieces from the Warehouse. She followed my advice and they did indeed look much better clustered together in one arrangement, rather than dotted throughout the garden. 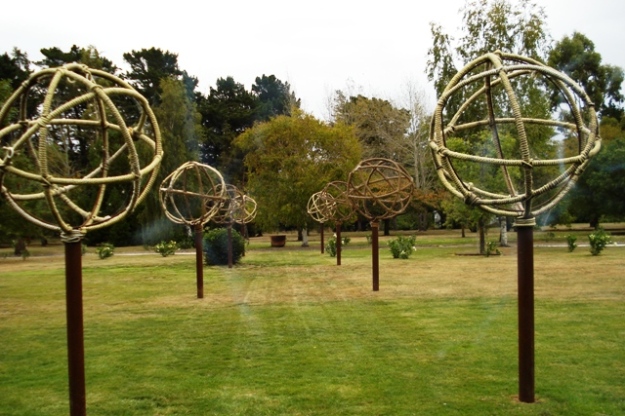 3) I admired these rope balls constructed around a metal frame at Winterhome Garden near Kaikoura. Garden owner, Sue Macfarlane, told me she had made them herself because she wanted an avenue entrance for a wedding party. I saw something similar offered for sale recently – though smaller and made from recycled barbed wire, which gives a distinctly rural New Zealand flavour. However, because barbed wire is somewhat hazardous, these balls would need to be placed where nobody is likely to brush against them or hit their heads standing up after tending to any garden below.

4) Personally, I am not a fan of classical-inspired statuary in New Zealand gardens. The cultural reference of such works is usually to Europe and to me it looks out of context here. I might be tempted to make an exception for this piece but it is the studied nonchalance of the setting with its long grass and the artfully casual placement which makes it such a romantic image. I also photographed it in an English garden, Gresgarth, where it looked wonderfully at home. 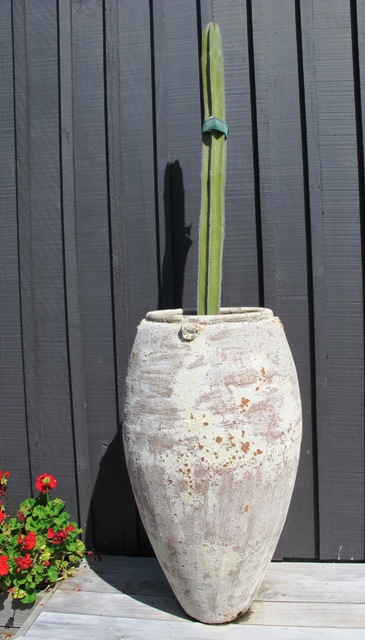 5) Unable to hold back my didactic tendencies, I include this example as a message. Dear readers, a beautiful pot does not need to have a plant in it. It can exist as a decorative feature in its own right and will often look a great deal better for the absence of a plant. I don’t know the origins of this pot – it looks like a lime-washed oil jar – but I think the phallic trichocereus cactus spoils it, even without the plastic stake which is out of sight in the photo.

6) Finally from our own garden, I offer the inverted plum trees. These were dug up and reburied upside down to make the root systems the feature. We did not treat the trunks to preserve them. Eventually they will rot out and fall over but they have been in place at least a decade now and are still stable. The white stones were a gift from a geologist friend who gathered them from somewhere on the Marlborough coast. I bleach them once a year to remove lichen and discolouring and they just sit casually on a stone table. 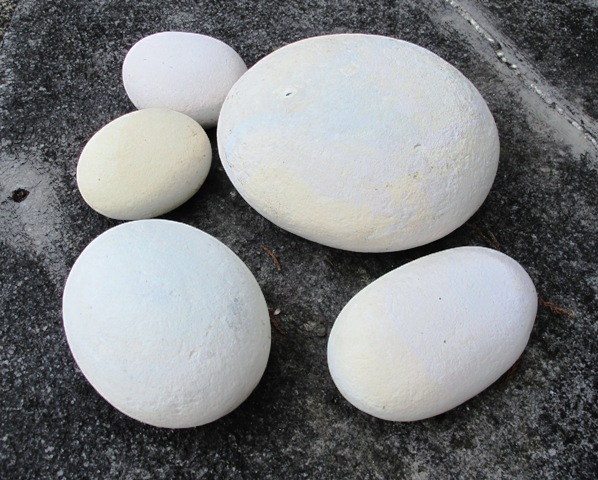 2 thoughts on “Garden decoration 1: leaning to the understated look”