We visited a Mellons Bay garden which had a location and view to die for. It is still very much in development and the owners are making the most of creating a garden space that maximises its remarkable location. It was there that I encountered a grass I had not seen before.

At first I thought it must be a mass planting of miscanthus but no, it is vetiver grass from India, botanically Chrysopogon zizanioides. I learned this from my friend and tour host for the day, the effervescent garden designer, Tony Murrell. Vetiver is apparently being widely promoted in Auckland for its erosion control capability. I looked it up. It puts its roots down four metres in the first year alone and is hardy to drought, prolonged flooding, fire, some frost and grazing. The roots can go down as far as six metres. By this stage, my eyebrows were pretty much reaching my hairline but it is apparently sterile and non-invasive so it doesn’t spread. And if you change your mind about it, you can use herbicides on it, though I can’t imagine digging it out without heavy machinery.

Personally, I wouldn’t be rushing to plant something that grows quite so strongly but we don’t suffer from erosion or land that slips so we don’t need something quite as drastic. If you prefer to use native plants, there are many references on-line that will give various options, such as here.

The view from the deck in city suburbia

From there, it was to see four smaller, city gardens. I had seen all of them before but not for several years. When you live in a densely populated city, sometimes with long thin sections that are not a great deal wider than your house, this sort of vista is pretty amazing. It is in Glendowie and the owners of the two open gardens had the wisdom to buy properties that looked outwards to reserve so there is a seamless visual flow.

Added to that, the row of houses have maximised what was once more or less wasteland that runs along the base of the properties. You wouldn’t want to go swimming or paddling in this water (I am guessing most of it is stormwater, supplemented by springs), but it is a delightful, sheltered common space at the end of the gardens.

The light was too bright and the shadows too deep to do justice to this cluster of bromeliads but I particularly noted it because it was a counterpoint to the vibrant and bright use of bromeliads mentioned in the first post of these two. This was restrained and understated but maybe more charming for that.

From there it was to a garden I have written about before – industrial chic I called it then and I did not change my mind on a second visit. Quirky, detailed and full of energy. I don’t want to own it but it makes me laugh. It is also on the market, should you feel such admiration that you want to own it. Although it is such a personal creation that the future owners may feel imposter’s syndrome until they make it their own. I would have taken more photos, but there wasn’t much room to move with so many people and rather a lot of accoutrements.

The box-shaped plant in the centre of the photo is the purple loropetalum.

Finally a gem of a garden, to which I returned as a private visitor the next day so I could have a closer look with the owners, Geoffrey Marshall and John Hayward (who also happen to be the Heroic Festival organisers). They are friends who will read this, so I don’t want to seem as if I am fawning, but if my lot in life was to be a tiny town section, this would be my personal choice. 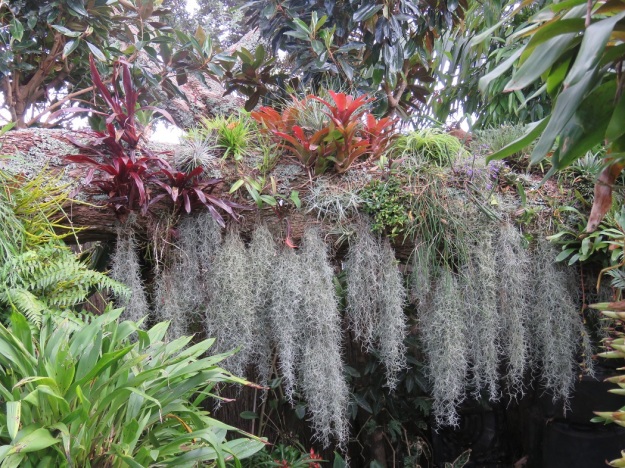 Despite its small size, good architectural design has given it total privacy and a good garden design has given it a sense of containment without being cramped. The level of refinement and detail is exquisite. The foliage is layer upon layer of detail without looking cluttered and the level of plant interest is extremely high. Wherever I looked, there was more fine detail to be uncovered with just the right amount of exotica. It takes a skilled eye and sure hand to be able to achieve that level of detail without it looking confused.

It seems a good place to finish my weekend of looking at the gardens of Auckland.