Not a blank canvas – closer to a wasteland with potential

Sometimes a garden can catch you unawares. At least, that is the case in a large garden. It is probably harder to avert your eyes from messy areas in a small garden. So it was that I found myself in the Iolanthe garden this week, thinning both the Daphne bholua forest that had formed (there is a plant that can seed and sucker alarmingly if you turn your back on it) and the sugar cane patch. 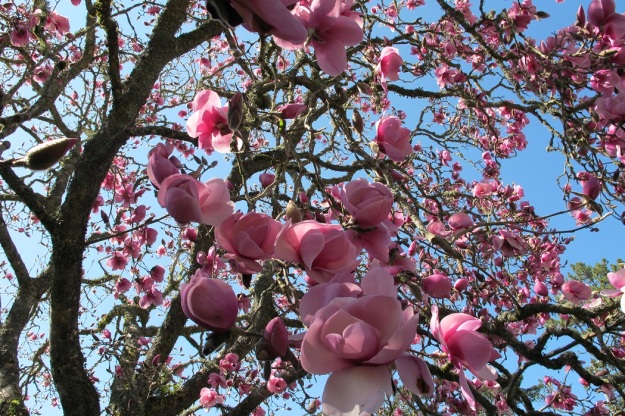 I paced out the Iolanthe garden and it is somewhere over 500 square metres so it is not a small space, though it is in a prime position and has a mix of shade and sun. It lost its way some years ago. In Mark’s father’s time, it was his vegetable garden but as the original plant of Iolanthe grew ever larger, the shade increased. I admit to having done a major effort on it back in the early 1990s, attempting to turn it into a stylish potager. In self defence, it was the fashion at the time and I was following Rosemary Verey’s example. I divided the space into rectangular areas defined by square, concrete pavers and planted rather a lot of twee buxus hedges. Of course, anybody with experience can tell you that little buxus hedges are not actually compatible with growing plants like vegetables that require friable soils to be dug over every season. Their root systems encroach ever more on the surrounding areas.

At its best, Mark’s chaotic butterfy garden could look like this – but all too briefly

Mark’s dad was patient with my efforts to pretty up the area but Mark removed most of the buxus in the years that followed. He then relocated the vegetables to a sunnier area on the property and the Iolanthe garden became the holding area for plants that needed to be relocated to other parts of the garden ‘in due course’ and the trial area for growing perennials he was buying in to see how they would perform here. And it became increasingly chaotic. At its best, in summer, it was Mark’s butterfly and bee garden with a riot of unrelated flowers, both self-seeding and planted. At its worst, it was a mess and that was for most of the year. I could no longer ignore it and it needed more than just an annual spruce-up.

This is a massive job and I had already started when I realised what I was doing – making a perennial meadow. We have made a considerable study of meadows and I have written plenty about different meadow styles. In our climate and conditions, we have to maintain some level of weed control at all times so that pretty mix of flowering annuals and field grasses is not a look we can maintain. But finally, I think the threads are coming together and I can plant a perennial meadow that will require only light maintenance and flower for maybe nine months of the year. The influence is very much Nigel Dunnett and some of the plantings I see on Pictorial Meadows. If you want to know more about this, google the work Dunnett has been doing at Trentham Gardens, near Stoke-on-Trent.

Existing citrus trees in this area

We are extending the permanent trees and shrubs. Mark has long talked about establishing an orange grove to give some purpose to the area. There are already about 10 citrus trees there (tangelo, limes, lemon, oranges and mandarins) and another three plants were hanging around the old nursery waiting to be planted. And feijoas. There was one growing and another two waiting for a home. Same with the tea camellia (C. sinensis).  While we are never going to be self sufficient in tea, I have taken to harvesting the big plant each spring and Mark had another two or three waiting to be planted.

Planting beneath the widely-spaced trees and shrubs is the big task but also the most interesting one. The meadow effect. Liberated from the feeling that I must manage the colours carefully and follow certain rules for herbaceous planting, all I am doing is thinking as I go about sustainable combinations planted in loose blocks. I am using the plant material we have to hand but avoiding using the perennials I have already featured heavily in the sunny perennial plantings around the new Court Garden area. In other words, really casual plantings but strong growers, a different plant palette so it doesn’t all look the same. Am I lucky that we can go into planting a fairly large area drawing on plant material we already have around the place or is that good management? Using material we already have does mean we know how it will perform in our conditions and how to manage it.

It was a throwaway comment from Mark that made me think more clearly about what I was doing. “I’ve always thought wind anemones have a place in an orchard,” he said. Yes! I thought. We have two shades of pink Japanese anemones on our roadside that I can raid and this is a place where they can grow in their own space and star in their season.

Elsewhere, we have a variegated agapanthus that I have never found the right place to feature in the garden. I have yellow day lilies I could use with that in one block. It is painting with plants and that is fun. I have already interplanted the purple eucomis with yellow crocosmia and am now interplanting bluebells and a pink alstromeria.

I have more confidence with this venture having ascertained that a small area I replanted two years ago and mulched heavily with fresh bark and leaf chip has stayed weed free. This week, I found that the price of a truckload of up to 6 cubic metres of such mulch material can be delivered here for a mere $100. This seems like a bargain to me. I am waiting for my first load and will mulch heavily. As with everything we do in the garden here, we factor in sustainability and maintenance from the very start.

We have always wanted a meadow and have had success with bulb hillsides but have been apprehensive about going full-on into a more extensive area. There is romance in the simplicity of flowery meadows but that does not mean they are simple to create. I am hoping that we now have sufficient experience and knowledge to make it work. It may be the last piece in the assemblage of sunny perennial gardens we have been putting in – all different in style and concept with very little overlap in the plant selection for each area.

I have a lot of work to do before summer to get the meadow planted. I just wish it wasn’t quite so muddy at the moment and that the weather gods would give us a spell of several dry days in a row.

5 thoughts on “Started at last – a perennial meadow”