“It’s very white out there,” he said

“It is very white out there,” Mark observed. We were standing in the roller door of our large shed, sheltering from another rainy squall and looking out to the new summer perennial gardens. The photo doesn’t fully convey the white experience. The row of Fairy Magnolia White, Camellia yuhsienensis and Mark’s hedges of michelia seedlings were all in view. Mark was envisaging a carpet of snowdrops at ground level as well, even though they are but a fleeting delight. I was looking at the michelia seedlings.

Mark has planted two sides of the new garden area in michelia hedges. Technically – in accurate nomenclature – these are all magnolias now but we continue to use the earlier term ‘michelia’ for the sake of clarity. When we say ‘magnolia’ here, we are almost always referring to deciduous magnolia trees so it is confusing to include the world of evergreen michelias which also feature very large in our lives at this time of the year.

When planting seedlings, it means every plant will be different. For the largest length of visible hedge, he planted out one particular cross that had not come out as he hoped because very few were coloured. The nature of the parentage means that they will flower well, not grow out of control and be suited to clipping but they will never have the precision of planting a row that is all one clone – in other words, identical to each other. Mark likes seedlings for mass plantings because it adds interest to have them all similar but not identical. 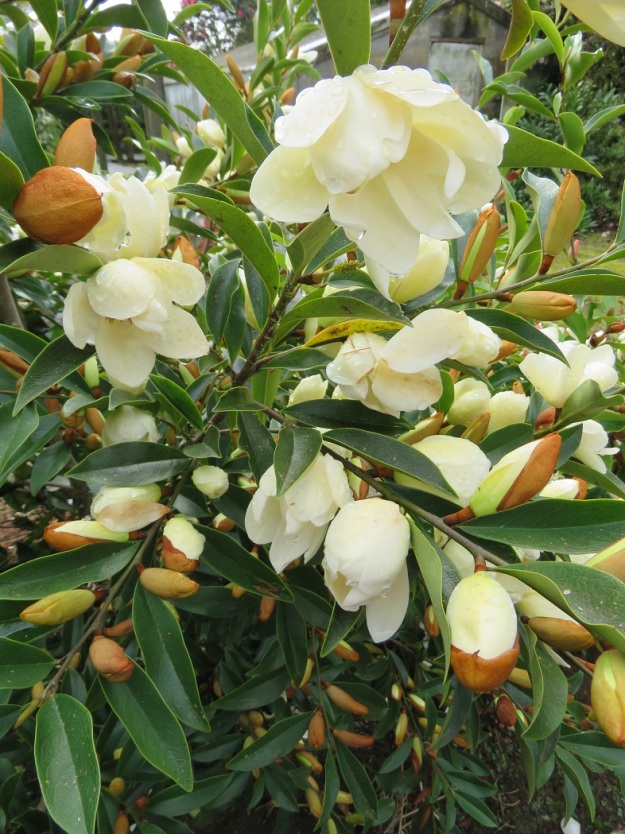 I paced along his hedging, estimating how many individual plants there are. Getting close to 200, was the answer, planted at about 30cm spacings because we want a quick hedge that can be trimmed as required. Each individual plant in bloom is lovely on its day but some are lovelier than others. However, none will be named and put into commercial production. Mark has already named Fairy Magnolia White and Fairy Magnolia Cream and he won’t name any more white or cream ones unless there is something that is radically different or a major improvement. So these are ours to enjoy alone.

At one end, there are about three different pink-toned varieties which are something of an oddity in amongst the cream and white majority. Again, he has already named Fairy Magnolia Blush in this colour range so they will just stay as a quirky aberration in the hedge at flowering time. We are okay with quirks.

Hardy michelias are basically white or cream. While there are new tropical species still being discovered and some of those show more colour, Mark has no interest in trying to breed with them, even if we could get them into the country to work with. Most of the michelias are not overly hardy at the best of times and he has been trying to get hardier selections (will they grow well and flower consistently in places like the UK, is one of his measures) without introducing more tropical genes. But he has managed to get as far as pinks, purples and primrose yellow by ever more complex crosses using the material he has available.

I see it was four years ago that I set out to pick a representation of single blooms from his seedlings to show the range in colour, flower size and shape that he has reached in what is predominantly a white or cream plant genus. While he has continued to flower more since, this photo remains a fair summary. We have selected three new ones that are currently in propagation and performance trials for probable release but there is a whole lot more to selecting a plant than the just flowers. My lips are sealed as to what makes these three worth singling out until we are further down the track of commercial trials.

In case you are interested in what goes into selecting a plant (or you want to name something you have found), off the top of my head, the checklist includes the following:

Only then do the propagation trials start. There is no point at all in selecting a plant that is difficult to propagate, where the percentage of cuttings that do not set roots is too high, where plants *whiff off* – Mark’s phrase meaning die – during production, or where very particular propagation and growing techniques are required for success – growers just do not want to put the time and expense into growing plants that are unreliable or too picky.

New releases used to be the life blood of our mailorder business. Some selections stood the test of time, others not so much. At least all the magnolias have proven to be worthwhile. It is the vireya rhododendron selections and a few of the camellias that have fallen off the Jury plant wagon. These days, we get a new plant through the initial selection and then we hand it over to our agents to manage through final trials and then getting it to market.

It is a long path to getting a new cultivar onto the market. But in the process, we get a lot of unique plant material to use in our own garden. 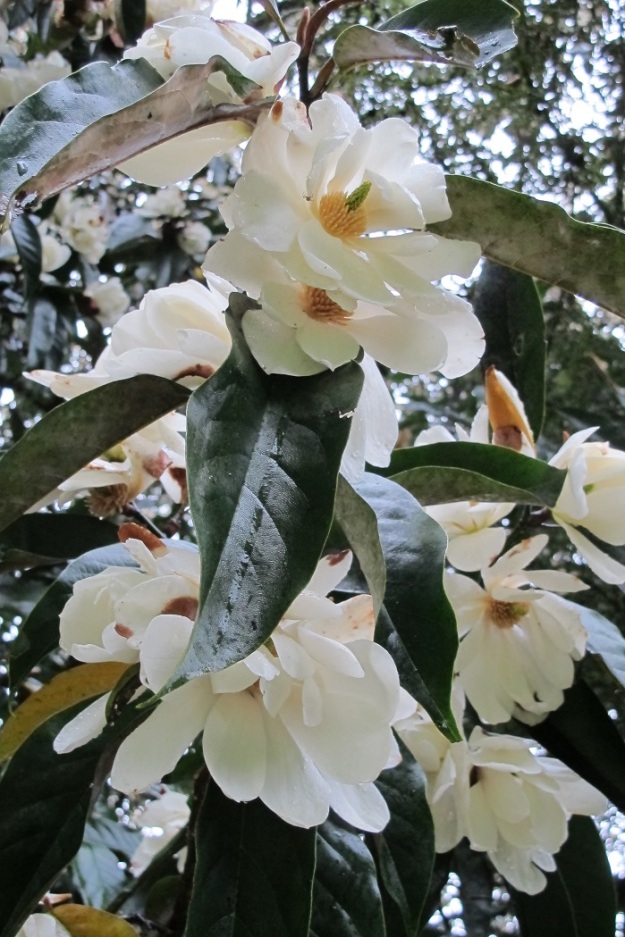 Magnolia doltsopa syn Michelia doltsopa – a selection released as ‘Rusty” by nurseryman, Peter Cave. Pretty flowers but showing typical floppy tendencies of this species and the original plant in our park is massive.

9 thoughts on “The plant breeder’s garden”