Away from gardening for this post. Our local town of Waitara never fails to surprise me. Over the last four decades or so, Waitara has suffered the fate of many small towns with a decline in retail outlets. Most of the main street retailers seem to be either takeaway food outlets or charity shops now with a fair representation of empty premises. So it was that  I had failed to notice the window display in the disused butcher’s shop. Knitted meats!

I may have laughed out loud. Here is whimsical folk art on the main street. The windows were pretty dirty and the light conditions were less than ideal, but I offer the best of my photos for your amusement. I think it was the strings of sausages (both raw and precooked and labelled as such), saveloys and salamis that amused me most. 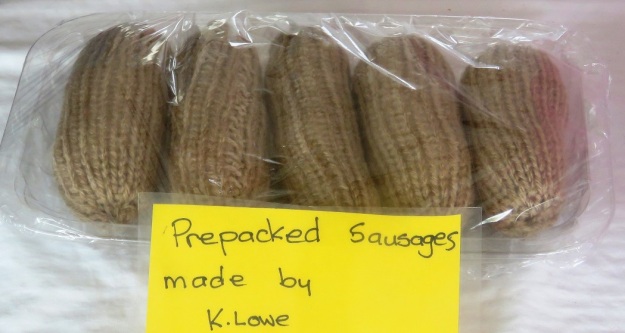 Others may be more impressed by the mince. Or maybe the bacon or chops. All presented on clear plastic trays and covered in cling film as the real produce usually is. It all just seemed like an idea off the square to fill an empty display window but with a debt to historical context. Waitara grew to be more than just a coastal cluster of houses because it had a huge freezing works (meat killing and processing plant). First started in 1881, the permanent closure of the works in 1997 dealt a body blow to the town which took well over a decade to recover from the shock and disruption. 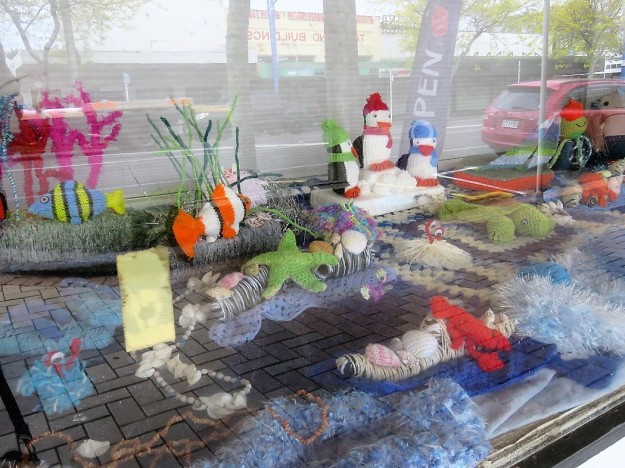 The window on the other side of the locked door contains an eclectic mix of seaside accoutrements plus penguins. A knitted diorama, no less. This may appeal more to children but it was the unexpected cultural and historical context of the knitted meats that took my fancy.