Crocus to the left, colchicum to the right

It is that time of year, dear Readers, when it is time to remind some of you, that the larger bloom to the right is NOT a crocus. Not at all. It is not even a relative. It is a colchicum. The left-hand flower is an autumn flowering crocus, probably one of the C. serotinus group, maybe salzmanii.

Colchicums come from the family of Colchicaceae and the order of Liliales.

Crocus belong to the subfamily of Crocoideae, family of Iridaceae and order of Asparagales.

That is the botanical explanation. The lay explanation is that crocuses are much smaller and daintier and bloom at the same time their fine foliage is coming through. Many of the 90 or so species flower in spring but some will bloom in autumn. 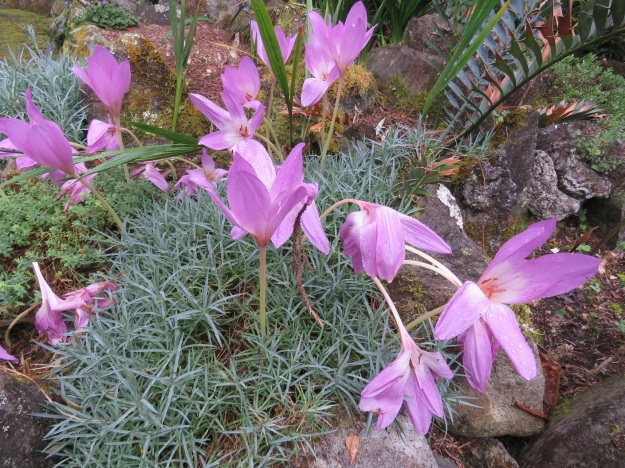 Colchicums, on the other hand, bloom well before their foliage ever appears and have much larger chalice blooms – and more stamens if you can be bothered counting. Compared to the crocus, they look as if they are on steroids but in fact it is the product of colchicine which is extracted from them. Colchicine’s main use was – or is – as an anti-inflammatory for the treatment of gout. Not one to try yourself at home, however, because it is highly toxic in the wrong hands. When the foliage appears much later, it is large and lush all winter until it dies off, untidily, in mid spring.

Because they flower before the foliage appears, colchicums are sometimes referred to as “naked ladies” (even “naked boys” I found somewhere on the internet though I have never heard that), but that is merely confusing to those of us who understand belladonnas to be naked ladies. 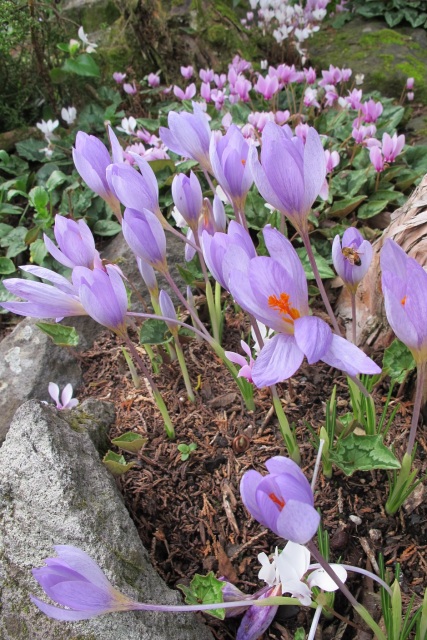 Crocus, but probably serotinus, not the saffron crocus

Crocus, on the other hand, give us saffron. Well, the saffron crocus does but we failed with our efforts to grow it here despite starting with a fair number of corms. They did not reappear after the first season. Too wet and humid, I think.

Colchicums are a better bet when it comes to naturalising bulbs in a meadow setting, being somewhat tougher and showier in such circumstances. 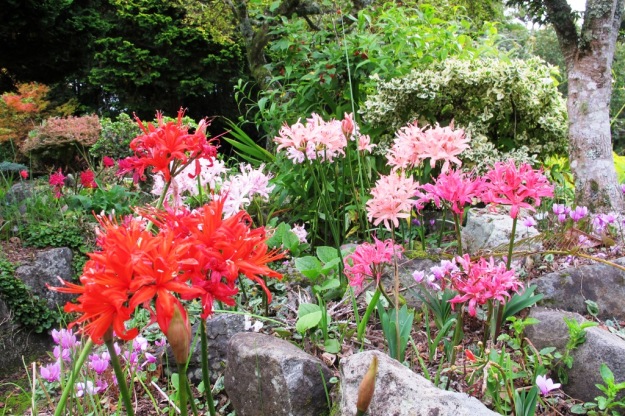 When I am old and maybe decrepit, needing to draw in the boundaries of the garden, I shall fluff around in the rockery. I really enjoy this area and, as we enter autumn, my heart sings with the new season blooms.

Traditionally, rockeries are for growing alpines and sometimes retaining banks. However, we can’t grow alpines in our climate and our rockery is on the flat. It is pure 1950s vintage, built from a combination of rocks of various sizes, concrete and some brick, with sunken paths and raised beds divided into many hundreds of little pockets of soil. It is designed for highly detailed gardening and at about 20 metres by 10 metres, it is relatively large.

The purpose of the multitude of small beds is to keep bulbs separate and to confine the more invasive ones. Most of the pockets have two or three different types of bulbs in them to give seasonal interest.

There is always something to see, though summer is the toughest season. Because there is so much stone and the beds are elevated, parts of it dry out almost to dust. We have dwarf conifers, cycads, and a few other small shrubs to give both all year round structure and summer shade. There are a few smaller perennials and a limited range of annuals and biennials but generally, the rockery is about the bulb collection.

The range of nerine colours at one time

As we enter autumn, it is as if the rockery heaves a sigh of relief and leaps back into life. All the bulbs whose growth is triggered by autumn rains start to move.

As a general rule, we find that the species bulbs look better. They are usually smaller flowered and more delicate in appearance than the showy hybrids which can look out of scale and even vulgar in this particular context. The exception is the nerines which peak this month. While we grow some nerine species, it is the sarniensis hybrids that dominate. A few of these are of Exbury origin but most are the result of breeding efforts by both Felix and Mark Jury. The colour range is delightful – from white, through every shade of pink including near iridescent highlighter pink, to purple, corals, almost apricot, oranges and reds. Unlike the floristry business, we want shorter, squatter stems so that the heavy heads are held upright even through autumnal weather.

Also lighting up the autumn is Cyclamen hederafolium (formerly known as C. neapolitanum) which hails from southern Europe and Turkey. This is the easiest of the dainty species cyclamen to grow and it has gently naturalised itself here. It throws its first brave flowers up in January but peaks this month. It is one of a number of autumn bulbs that bloom first before the leaves appear. Others are most of the nerines, colchicums and Haemanthus coccineus.

The pretty autumn flowering peacock iris, Moraea polystachya, outdoes almost every other bulb with its long flowering season. It seeds down gently into the cracks between the rocks without becoming an invasive menace. Some of the ornamental oxalis also give extended displays of colour but not all oxalis are born equal and neither are they all born with good manners. The most reliable performers in our rockery are O. purpurea ‘Alba’, O. luteola and O. lobata. They have been here for decades and never looked threatening. 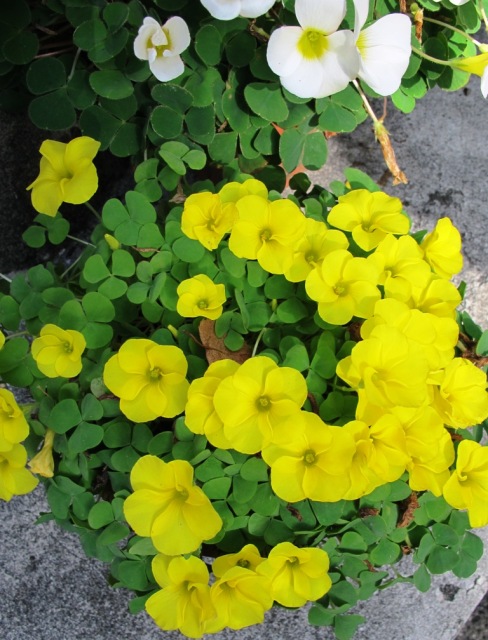 Then there are the bulbs with a much shorter season. Colchicum autumnale makes a bold statement with its big lilac chalices held above bare soil. Hippeastrum bifida is a transient delight for us. We have it in both pink and red and the blooms look as if they have been touched with gold leaf when the sun shines through. The autumn flowering leucojum is one of the daintiest and prettiest of tiny blooms and the crocus also delight. 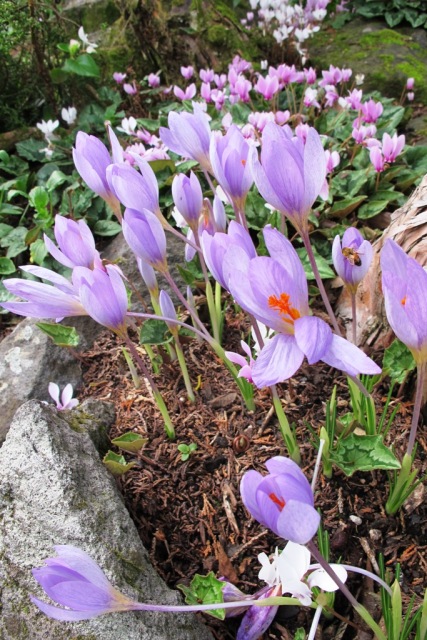 The rockery is not what I would call low maintenance. The more time I put into it, the better it looks. In spring I completely replaced the soil in maybe a dozen pockets in my efforts to eradicate the pretty but invasive Geissorhiza aspera. I do not lie when I tell you that we have battling it for well over 25 years, hence my extreme action in replacing the soil in the worst affected areas. We have to be vigilant on weeds, slugs, snails, narcissi fly and weevils. I wire brush the rocks from time to time to stop the moss growth from hiding their shapes. There is plenty there to keep me busy in my dotage and, with the raised beds, I can do a lot of it sitting on a stool. Sometimes it is the detail and the little pictures in the garden that delight.

First published in the NZ Gardener April edition and reprinted here with their permission.

Just for the record, and in light of finding myself in print with some incorrect information which I didn’t actually write, I offer the following clarification. 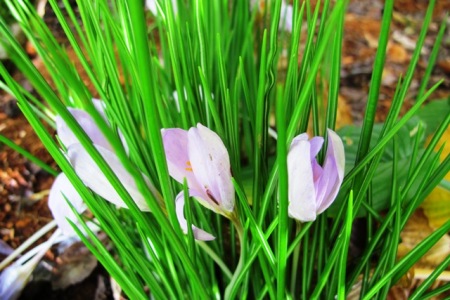 The true autumn crocus is indeed a crocus

The true autumn flowering crocus is in fact a crocus. There are many different species in the genus of crocus, some flowering in spring and some in autumn. Generally, crocus flower around the same time their foliage appears. We don’t have a species name on this pretty autumn crocus in our garden. Trace the botany of crocus back and they are part of the subfamily of Crocoideae, the family of Iridaceae and the order of Asparagales.

Colchicum autumnale flower about the same time for us, but the flowers appear a long time before the foliage so they are sometimes called naked ladies. Equally, they are sometimes referred to as autumn crocus but they are not. Again it is a big genus with many different species but they come from the family of Colchicaceae and the order of Liliales.

Sternbergia are not autumn crocus either (Photo credit: Meneerke bloem)

Sternbergia are sometimes referred to as autumn crocus but they are no more autumn crocus than colchicums. In fact they are more closely related to narcissi than crocus (a fact I discovered from the Pacific Bulb Society) and they are closely related to amaryllis. However, they flower with their foliage and their blooms, generally yellow, resemble a crocus in form. We have sternbergia in the garden here but they don’t flower overly well for us, possibly because they are essentially a Mediterranean plant which likes a hot, dry summer.

Amaryllis belladonna – the other naked ladies and closely related to sternbergia

Also widely referred to as naked ladies are Amaryllis belladonna or the belladonna lilies that are mostly seen as roadside plants here. The genus is amaryllis, the species is belladonna (and there is only one other species in that genus) but the sub family (Amaryllidoideae) and then family (Amaryllidaceae) are the same as sternbergia. Trace them back another step on the Linnaeus chart and you find they are from the order of Asparagales which is where they meet the family tree of crocus – quite a long way back, botanically.

The bottom line is that the true autumn crocus is indeed a crocus, though it may be one of many different species. 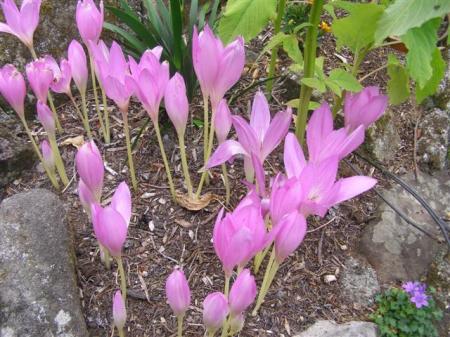 Now that the temperatures have dropped noticeably and I am reconciled to the thought that summer has been and gone for another year, I am prepared to welcome the sight of the colchicums in flower. These are often called the autumn crocus because their simple six petalled cup-like flowers resemble those bulbs but they are distant relatives at best. They have their very own botanical family which is colchicaceae. Their flowers are considerably larger than most crocus and they flower well before their foliage appears. Because they have very large bulbs and grow quite vigorously, they are not shy delicate little things you will lose in a garden situation. In fact they can be naturalised in grass. The flowers are more lilac than pink and are hardly long lived but you can get a succession of them from a single bulb. When the leaves appear, they are relatively large, lush and green but the downside is that the foliage hangs on for a long time into early summer by which point it no longer looks attractive at all. Autumnale is native to quite large areas of Europe.

Colchicums are the source of colchicine, a controlled pharmaceutical of considerably potency used in cancer treatments and also to cause mutations in living cells, which is sometimes advantageous but does need to be handled with care. These bulbs are also the true Naked Ladies though we more commonly refer to belladonnas as bearing this politically incorrect epithet.