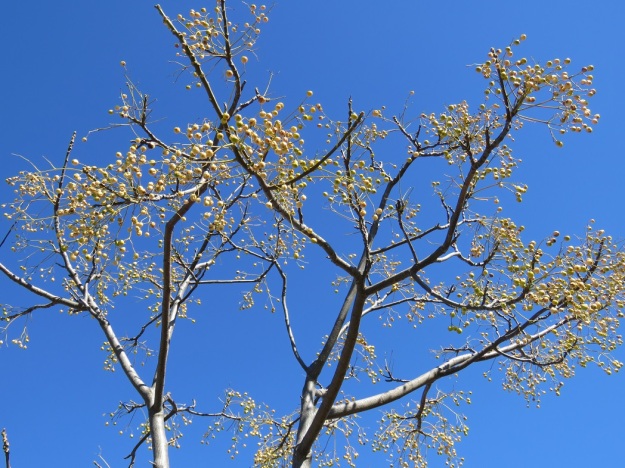 I can tell you that the Melia azedarach at the National Arboretum in Canberra was planted by Doctor Jose Ramos-Horta, President of Timor-Leste, in 2010.

I doubt that many people take the time to pause and send a vote of thanks to our forbears who had the vision to create city parks and botanic gardens. Our closest city of New Plymouth has its Pukekura Park, 52 hectares of park and gardens about 5 minutes’ walk from the main street. It dates back to the visionaries of 1880 and provides a green heart to the city. It is loved with a passion by locals and attracts large visitor numbers. Other New Zealand cities have their equivalents but most date back to a similar era. Aside from Auckland Regional Botanic Gardens being established in Manurewa, I can’t think of major new ventures from modern times.

It was a second visit to the National Arboretum in Canberra that had me thinking along these lines. This enormous project, encompassing 250 hectares, is a response to the devastating bush fires of 2003 which burned out the area. It is a grand vision, still in its infancy, that will create a legacy for generations to come.

Looking over the city from the arboretum

While some areas can look a little … utility, shall I say, at this early stage and the selection of some tree cultivars to be represented en masse may raise a dendrologist’s eyebrows, the large vision will triumph over such doubts with time. The infrastructure is going in with attention to architecture that will blend with the landscape, an attractive educational area and one of the most delightful children’s play areas I have seen in a long time. Everything appears to be done with a view to sustainable growth in the long term and it is an impressive venture. It has an international flavour with involvement from foreign embassies and heads of state. This is Canberra, after all. 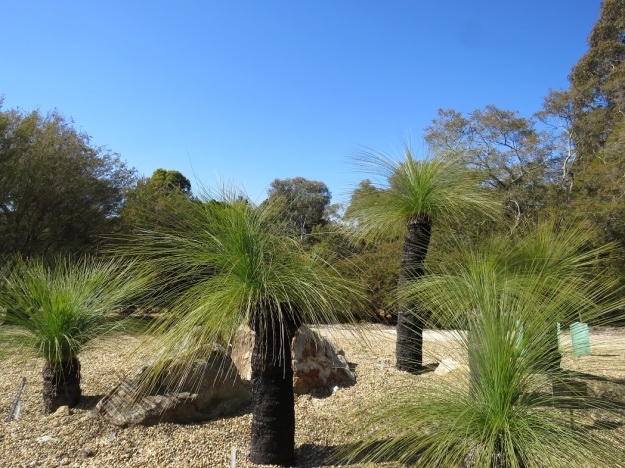 Canberra also has the National Botanic Gardens which were not officially opened until as late as 1970 although the first small steps to establishing them were taken in the late 1940s. In that harsh climate of hot, dry summers and cold winters which are often dry, they don’t get the same growth rates that we get here and to my eyes, the gardens still look young. I have been to them several times now. Because the focus is entirely on Australian native plants, they have a very different flavour to anything I see elsewhere and I really enjoy that difference, along with seeing new areas being developed within the site. It is indubitably …Australian. As it should be.

Banksia species in abundance at the Botanical Gardens in August

It made me wonder where our courageous new ventures are here. We generally steer clear of publicly criticising the local money being spent by the Taranaki Regional Council on what are described as the ‘regional gardens’. This amounts to many millions of dollars more than I think most ratepayers realise but it also sniffs of the cargo-cult mentality – build it and the crowds will come. It remains to be seen if that will happen but it seems unlikely in the long term. The problem is that the Council took on three existing gardens, all of which suffer from issues including obscure location, difficult access, off-putting terrain, pretty awful micro climates and somewhat anachronistic gardening visions from times past.

With so much spare money sloshing in the budget, we can’t help but think it was a missed opportunity to create a new vision for future generations, getting the location, micro climate and terrain right from the start. The role of public green spaces is so very important and likely to get more so into the future. It would be good to look to the future and to invest in that, rather than resting on the laurels of the visionaries of the distant past. 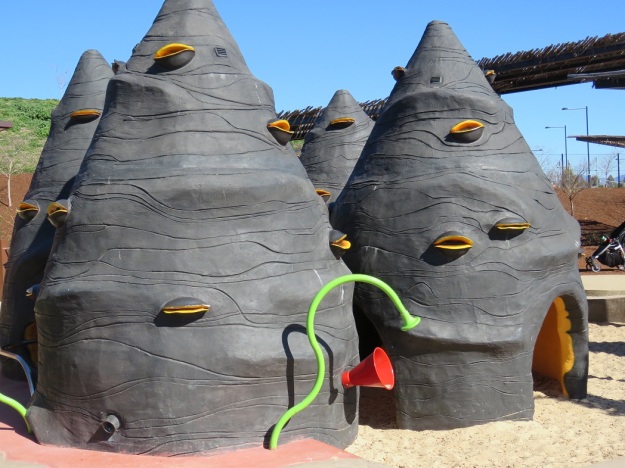 Banksia pods in the children’s playground at the arboretum 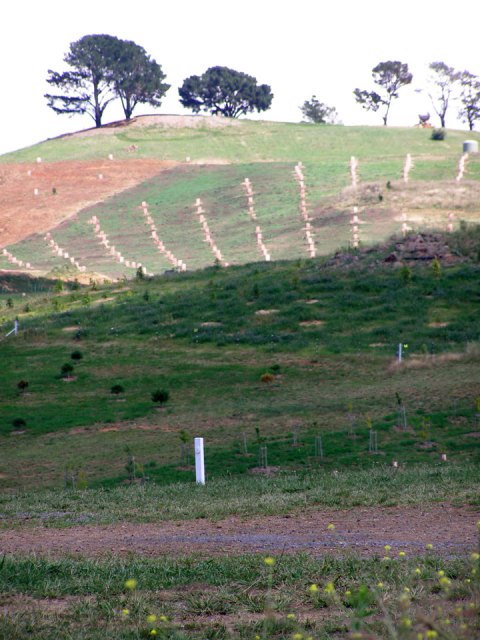 Not a lot to see yet - the national arboretum

Sometimes we parents just have to accept that we have lost our children to the western continent. With two daughters now across the Tasman, we are philosophical that at least they have not chosen to live in Perth (long haul flight) or further afield in the northern hemisphere. New South Wales and ACT are as easy to get to, and often cheaper, than the bottom of the South Island. We headed over for some family bonding last week. This was our first visit to Canberra in warmer months. Mark had been underwhelmed by his previous visit in winter (it is cold, very cold) but it was a great deal more charming at the end of an unusually wet summer.

Canberra is a city of wide boulevards and many trees. How we wish that New Zealanders would be so tolerant of trees. But Canberra is a designed city and the butt of many jokes in Australia, seen as dull and lacking in soul. Its designer was in fact an American, Walter Burley Griffin. While his Canberra creation may be scorned by non residents, his other talents apparently included introducing the world to the ubiquitous carport and the L-shaped floor plan for housing so he certainly left a legacy. His city plans for Australia’s capital included an arboretum and it is only now, seventy years after his death, that his vision is being realised with the implementation of a plan for 100 forests and 100 gardens. I am a bit suspicious of the future of 100 gardens which will require considerably more maintenance than the 100 forests. Pragmatism and economic issues may determine the future of that aspect of the plan but they are well on track with the forests.

An arboretum is a collection of woody plants, predominantly trees. It usually has a strong conservation and educative function and encompasses a wide array of different tree species with particular emphasis on those that are rare and endangered. Our best known arboretum in New Zealand is Eastwoodhill, just inland from Gisborne. The national arboretum in Canberra is a somewhat different vision, although they certainly acknowledge the guiding rules of arboreta. There were three principles governing tree selection. Varieties either had to be rare or endangered (such as Australia’s own iconic Wollemi pine), of ethno-botanical significance (not sure what that means), or symbolic in their countries of origin. That last criterion seems to have governed a fair number of selections, partly because overseas embassies have been encouraged to become involved. This would explain the plantings of varieties such as Ginkgo biloba, Parrotia persica, Cedrus libani (the cedar of Lebanon) and Acer saccharum (the sugar maple). In addition to the selection criteria, varieties had to be capable of surviving Canberra’s climate which can get up to 40 degrees in summer and drop to minus 10 in winter, along with being dry, very dry.

The impetus for the arboretum is worth noting, as this country struggles with the aftermath of the Christchurch earthquake. It was the devastating impact of the 2003 bushfires around Canberra. I remember them well because our daughter headed back after Christmas just as those fires were starting – a source of some angst to her parents back home as the reports of the fires licking at the outer suburbs and destroying the surrounded countryside featured on our news. I saw the aftermath some months later on a visit. Amongst other destruction, the fires took out the pine plantations which had been planted on the land originally earmarked by Walter Burley Griffin for the arboretum. The space was cleared and the need for a symbol of recovery from disaster led to the arboretum plans being put back on the table. This being Canberra and the seat of government, it was not to be a state arboretum. No, like most other Canberra institutions, it was designated a national arboretum from the start. The area is 250 hectares on the outskirts of the city. The first 65 forests have seen 30 000 trees planted.

It is easy to be cynical. Much of it is mass planting of single species in rows – described to me as a rather industrial approach. The cherry tree selected in conjunction with the Japanese ambassador is Prunus x yedoensis – 320 of them in fact, planted en masse. Some might think that a whole range of different flowering cherries might have been more interesting but it is, apparently, to be 100 forests of 100 different tree varieties (one type per forest). Who are we to argue? This is a grand vision and over time, as the trees gain in stature, it will be an impressive sight indeed.

Simply the best farmers' market I have seen

Our forbears in this country had the vision to plan public areas and plantings. That is what gave us our beloved Pukekura Park today. But we are not continuing with new plantings and new areas on any large scale. In this country, arboreta are commonly the work of dedicated private individuals. We appear to lack the will to continue to do public plantings of significant trees in any number for future generations.

While in Canberra, Daughter took me to the best ever farmers’ market I have seen. Huge, apparently quite loosely organised, enormously popular and fascinating. Daughter loves it for the unsurpassed, genuine chai latte sold at one stall and because, if she gets there early enough, there are usually backyard vendors with seasonal curiosities like fresh mulberries, loquats, her much-missed feijoas, and, on the Sunday we went, different varieties of fresh figs. I would shop there if I lived in Canberra. 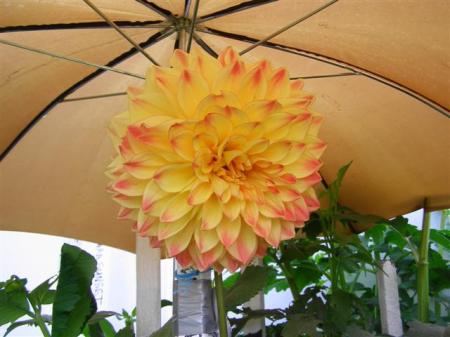 Whenever we are travelling, we also try and check out local open gardens, partly to establish international benchmarks of quality for comparison to our local festival gardens. Australia has adopted an open garden structure closely modelled on the Yellow Book scheme in the UK where selected gardens will open for charity one or two days of the year. We drove out to the ‘burbs to see one such garden and handed over our $A6 each. In the back garden there were only show dahlias – large quantities of beautifully tended dahlias, all in pots. I was particularly taken with the umbrellas erected over selected plants to protect their show quality blooms. Dahlias may be staging a bit of a comeback in the fashion stakes but we can’t get too excited over them so we were relieved to find more traditional mixed plantings at the front of the section. It was a nicely presented garden, not exciting, but served as a useful reminder how pleasant it is to be able to chat to the garden opener. In this case, he was both knowledgeable and genial.

Garden visiting in New South Wales will have to wait for a future column.