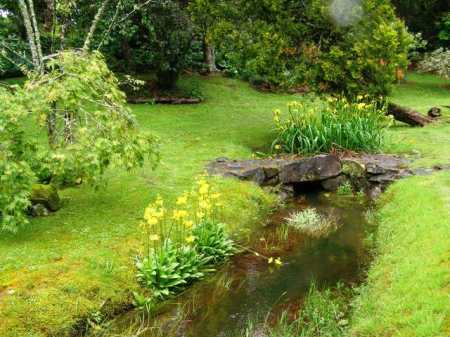 We have been making a major, combined effort to return our natural stream closer to something resembling pristine condition. I say natural stream because it is entirely natural where it enters and leaves our property but in between we manipulate it quite a bit. We have ponds, we play with the levels to create little rapids so we have the sound of water running and we have total control over what happens with flood water when we get torrential rain – achieved by a simple weir, flood channel and stopbanks. What we don’t have control of is the build up of silt and invasive water weeds.

What started as a pleasant summer activity reducing the water weeds (Cape Pondweed, oxygen weed and blanket weed are the worst), has grown to be something more major. We have hand pulled and raked most of the weed out. The clumps of streamside planting (mostly irises but also bog primulas, pontederia and a few others) are all in the process of being dramatically reduced in size. We hadn’t noticed quite how large they had grown in the years since they were first planted. The build up of silt in the water channel – up to my knees in places – is being stirred up and then flushed through to settle in the ponds. To flush it through requires holding the water back and then releasing it in one swoosh. To do it properly requires the building of a second, simple weir. Once all the silt is in the ponds, we will hire a sludge pump to clear it. Trying to stay on top of water weeds (none of which we introduced ourselves) is an ongoing task. We are thinking a bit more regular maintenance may keep the silt under control. Our access makes getting a digger in very difficult and the mess afterwards is such that we prefer to do things by hand.

The end result is that we will have a natural looking stream again. Sometimes it takes a lot of work to achieve and maintain a natural look in a garden.

1) Continue reducing mossy cover and lichen on rocks and paths in the rockery. In our humid climate, we have continual moss growth and while some of it softens hard lines and adds a certain look, too much of it obliterates lines altogether and makes the place look unloved. I use a wire brush and I know I will probably have to continue doing it for the rest of my gardening life here.

2) And on the theme of having too much of something, no matter how good, I need to finish my radical thinning of the black mondo grass (ophiopogon) and the cyclamen hederafolium which seem determined to try to choke each other out. The mondo grass goes on the compost heap. The large cyclamen corms I am laying as ground cover in an area where I have given up on both Rubus pentalobus (orangeberry) and violets which both proved to be too strong growing.

A fortnightly series first written for the Weekend Gardener and reproduced here with their permission. 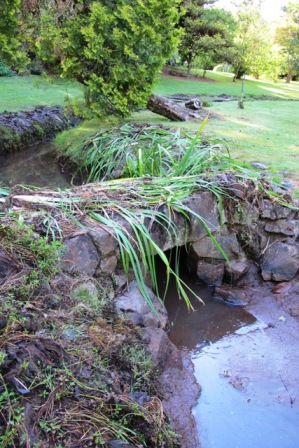 I have been getting really down and dirty this week, hand pulling the weed from our main stream. As this involves wading in mud up to my knees, I emerge looking decidedly worse for the wear and no, you are not going to see a photo of me in this state.

Our main issues are with dreaded oxygen weed, Cape Pond weed and blanket weed. If we didn’t stay on top of them, the entire water surface would disappear below vegetation, which rather defeats the purpose of having a stream in the garden. I asked Mark if he thought our problems were related to farm run-off and excessive nitrogen but he is of the opinion that it has more to do with slow water flow rates, though he felt the build up of mud and silt in our streambed would be extremely fertile. When we get sudden bright green algal bloom, it is an indication of nitrogen being applied on farms upstream.

There is something very appealing about a natural stream but they are not without their problems. Offhand, I thought of three gardening colleagues with natural streams. One has problems with flooding in torrential rain. The water cannot get away fast enough so it builds up on his property. One has no problem at all with flooding because their stream is in a deep ravine, maybe 20 metres below the level of their land, but this means it isn’t really a significant garden feature. The third has a picturesque mountain brook to die for, bar two factors. Their land has sufficient natural fall to clear flood waters quickly but the bubbling brook can turn into a torrent that scours everything alongside. This means that they can’t have streamside plantings of any quality. They tried two or three times before giving up, having seen the plants ripped out and carried away. Their second issue is that the water is of high purity so a number of neighbours have water rights granted. Each neighbour has installed their own alkathene pipe at the top of our friends’ garden where the stream enters, running the pipes along the streambed until they exit at their adjoining properties down the bottom. There must be at least five alkathene pipes, both black and garish white, visible in that stream. It is not a good look.

So be careful what you wish for. None of these people, however, have to do what we do and clear the waterway of vegetation every year or two. We eliminated problems with flooding and scouring but our water flow is not sufficient to stop the growth of water weed. Our wonderfully natural looking stream is actually the result of outside expertise and in-house experience coming up with a low tech solution. We control the water where it enters our property by means of a simple weir. In normal conditions, this allows the water to flow equally down two streambeds. One meanders pleasantly through our park while the other is a deeper flood channel girded by stop banks. The two stream beds join up again on the other side of our property so the flow downstream is completely unaffected. When heavy rains cause flooding, a mechanism is triggered which directs all the water down the flood channel. By these simple means, we eliminated flooding, boggy patches and scouring from the park though we do have to manually reset the weir in order to get the water flowing again.

The pond weed is the direct result of having a relatively low flow through the park area, though our stream is such that it never dries up. Oxygen weed is a curse. We had a bad infestation which Mark finally eliminated entirely for some years. He blames the reinfestation on people emptying unwanted goldfish bowls into the stream at the corner by the road. Do not ever do this. The goldfish are most likely to die but the oxygen weed is an invasive menace in slow moving water.

Our other great burden comes from a former neighbour who, as far as Mark is concerned, should be lined up and shot for liberating such an invasive weed. African Cape Pondweed, also known as water hawthorn, (botanically Aponogeton distachyum) is undeniably pretty, with a very long flowering season. Presumably this is why the former neighbour planted it on the margins of his ponds. Because he had no control over the water flow, the inevitable floods scoured it all out of his place but it found a lovely home in our slow moving sections. I don’t know how many hundreds of hours we have spent rooting it out. It is quite good friends with the oxygen weed because it can grow through it and spread its lily pad-like leaves. Between them they have the potential to turn our stream to bog. Native weeds are nowhere near as aggressive.

It is only yours truly who has shed most clothes to get in and hand pull the water weeds this year. Generally this is done by the two men in my gardening life (Mark and Lloyd) who take it in turns to wield the long handled rake and manually haul it all out on to the bank. It is a slow process and pretty hard on their backs. I thought it would be faster and easier to do it by getting in and so it is proving to be. The water is pleasantly warm, the mud even more so on sunny days. I just have to time my mud wrestling because I can’t exactly stop for lunch or a cuppa. Wisecracks about eels are not welcome.