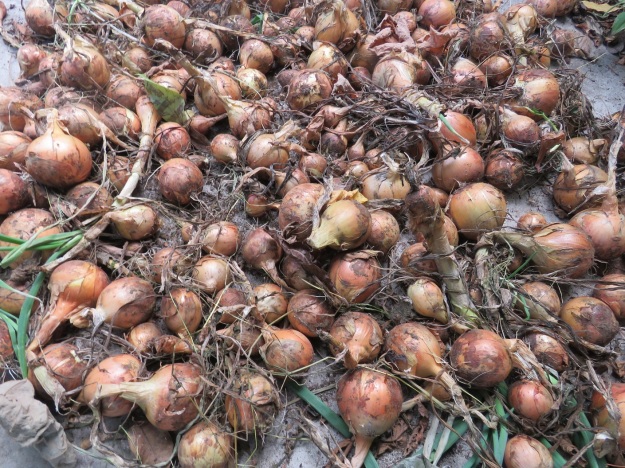 The onions are not the main purpose of this story – more on those a little later. They are just more visually appealing than the sight of rubbish sorting at its most basic level.

I mentioned in last week’s post the heartening sight of how little landfill waste was generated by the 50 members of the IDS when they lunched here.   This week it was a coachload of Massey University environmental ecology students who visited. I put out my labelled pots for the waste, curious to see how they would respond. They passed with flying colours. Of course they did. What else would one expect from these young people on whom rests so much hope for the future? 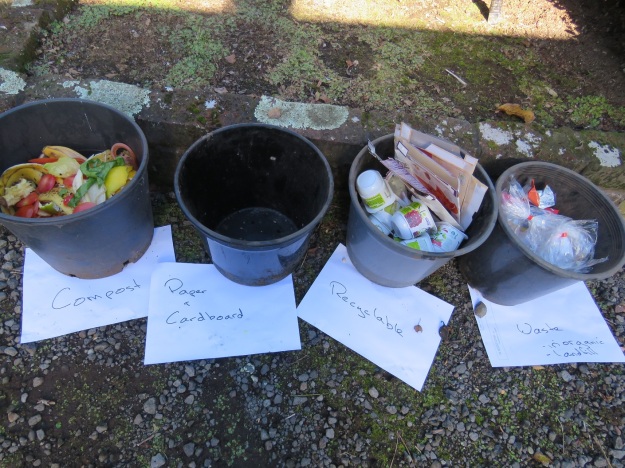 I now realise what I have failed to do is to photograph the lunch food laid out for these large groups. Therein lies the key to minimising inorganic waste. With the IDS, the menu included quiches cut in squares, small filled rolls, green salad and fresh watermelon for dessert. And coffee, tea and chilled water served from large jugs. All the food came out on china or wooden serving dishes. The only disposable items used were the cardboard ‘plates’ and bamboo forks.

The students had an expansive range of options from which to assemble their own filled rolls and sandwiches with fresh fruit to follow. Plus the option of yoghurt and treats like muesli bars which admittedly generated individual waste. But the bulk of the food was in multi-use plastic containers and even the butter came cut in individual cubes from a large block so there was no packaging needed and no wastage. The students had been told to bring their own water bottles which they refilled from a nearby tap.

I have learned two things. If you set up a situation where individuals are expected to sort their waste, they do it but most waste is reduced by the steps taken in the catering. We have become so used to individually packaged portions – marketed as being both convenient and hygienic – that many people have forgotten that it used to be done differently and sometimes that is better. A sandwich or filled roll prepared on the spot to one’s own tastes is hugely preferable to getting one somebody else prepared four hours earlier and then left to sweat in its own plastic cling-film wrapping. 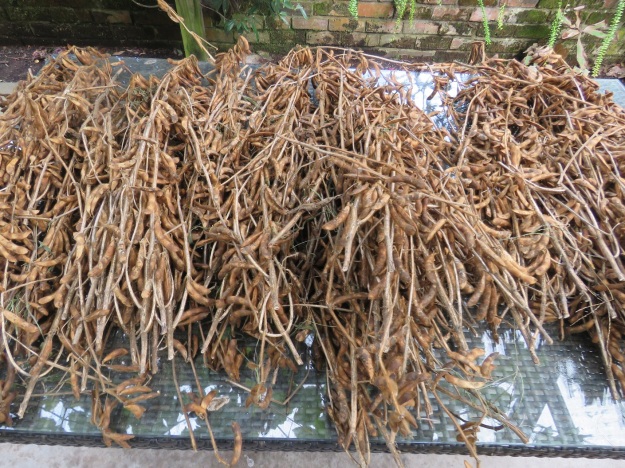 Waste is much on our mind here. Hence the onions seen above. And the delight at a successful soy bean harvest. Why onions and soy beans when they are extremely cheap to buy, you may wonder. Why not grow the higher value crops? We grow those too, or at least Mark does. Space is not a problem for us. But commercial onions are reputed to be one of the most heavily sprayed crops and we know ours are spray-free. And soy beans may be cheap as chips but they also come with very high food miles. The food miles are on our soy beans are zero. Besides, when it comes to taste treats, freshly picked edamame beans steamed and sprinkled with a little rock salt is right up there as gourmet food.

Not all crops are worth growing. The peanuts gave a really good yield last year but were so tedious to de-husk by hand that even Mark decided they weren’t worth the effort. He is quite happy to prepare the beans, seeing his attempts to produce as much food as he can from our own property as a worthy challenge. Not only does it hugely reduce the amount of waste we personally produce but we also know the origin of our food, the conditions in which it has been grown and the age of the produce.

This all feels like a return to where we were at back in the 1970s, though we are more lined and more experienced now. If more of us had stuck with that rejection of consumerism back then, maybe the world would not be in such a parlous state. 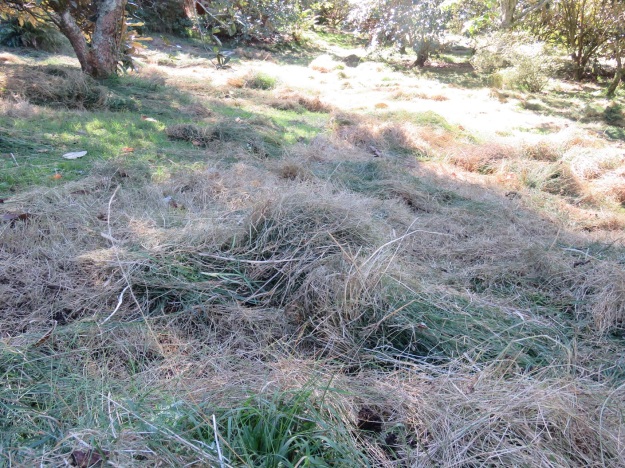 Applying related principles of lightening our footprints on the land to the ornamental garden is an entirely different topic because there is the added factor of aesthetics. We are spending a lot of time discussing and experimenting here but in the meantime, I can tell you that one man went to mow, went to mow the meadow. With our smart new sickle-bar mower because that is all that could handle the mountains of meadow grass. So much grass, in fact, that Mark was wondering if we should be teaching ourselves the old skills of building haystacks. This current and most major mowing is just the latest instalment of an ongoing experiment.  How far can we change our gardening habits and tread more lightly on the land yet still be happy with the high aesthetic values we strive for in the garden? Time will tell.