I was going to write a piece this week shouting that now IS the very time we should be talking about climate change, aimed at the Australian prime minister, Scott Morrison, who left his burning country to holiday in the cleaner air of Hawaii, declaring that now is not the time for knee-jerk reactions to a major drought and extreme fires and neither is it the time to talk about climate change.

But the majority of Australians voted that man and his government in this very year and I decided that maybe I would leave it to those voters to reflect upon their collective decision and respond to their own environmental crisis. Instead I will focus on flowers. 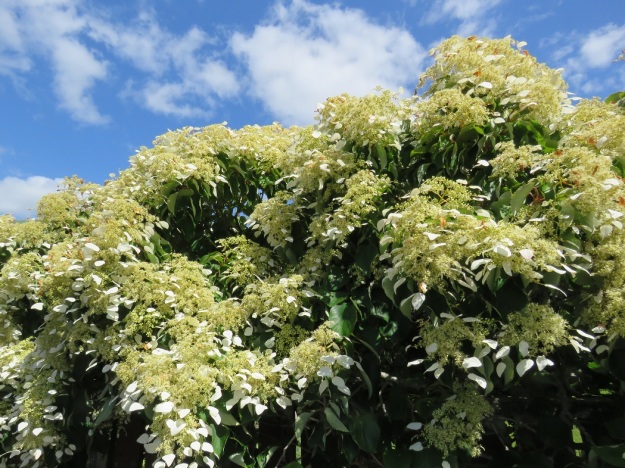 Hydrangea petiolaris, resplendent in full sun, although it has its roots on the cool side of the fence. Most climbers appreciate a cool root run.

Both the common climbing hydrangea, H. petiolaris, and the less common Schizophragma hydrangeoides are in full bloom here and I have never lined them up side by side to compare them. We produced both commercially in our nursery days but concentrated more on the allegedly more refined and desirable schizophragma. What were the differences, I wondered, in visual terms? 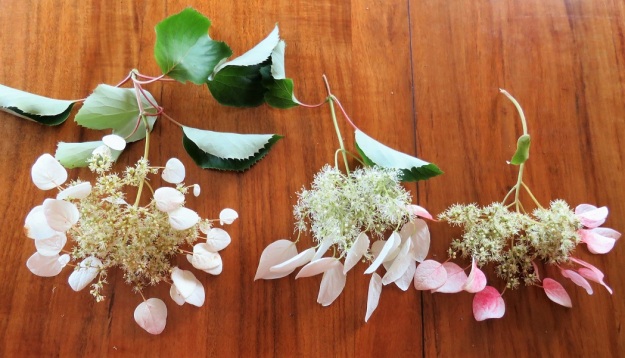 Hydrangea petiolaris to the left and the white and pink forms of Schizophragma hydrangeoides. Petiolaris looks creamier because it is an older flower grown in full sun.

Not a whole lot, was the answer when I lined them up. The pink form of the schizophragma is  indubitably a different colour – rosy pink sepals, not white. H. petiolaris has more fertile flowers (the central tiny blooms on the lace-cap) and somewhat smaller outer petals (ray florets or sepals). It makes it appear a little bit heavier perhaps, than the light dancing of the sepals on the schizophragma. The hydrangea also has larger leaves overall. All of them have a light scent with a slight variation between the two species but nothing of great note. 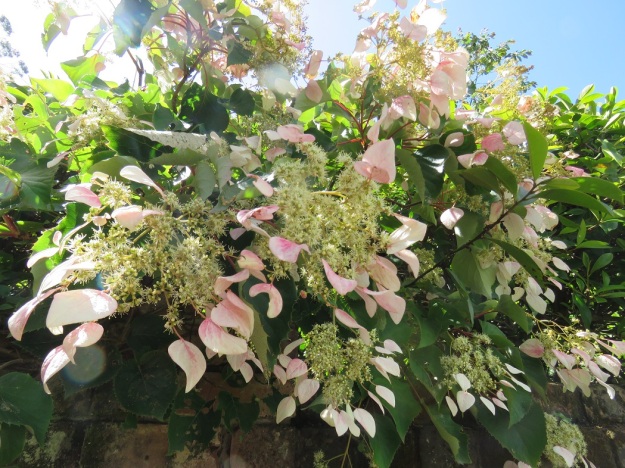 Botanically, there is a difference. They are distinct species, though from similar parts of the world (woodland Asia, particularly Japan) and liking similar conditions. Schizophragma is nowhere near as common as H. petiolaris and has the reputation of being slow to establish. But I planted that petiolaris many years ago and it took several years to reach its stride, too. Mark reminds me that the reason he went for the schizophragma over petiolaris was because the latter would not set flowers on young plants. 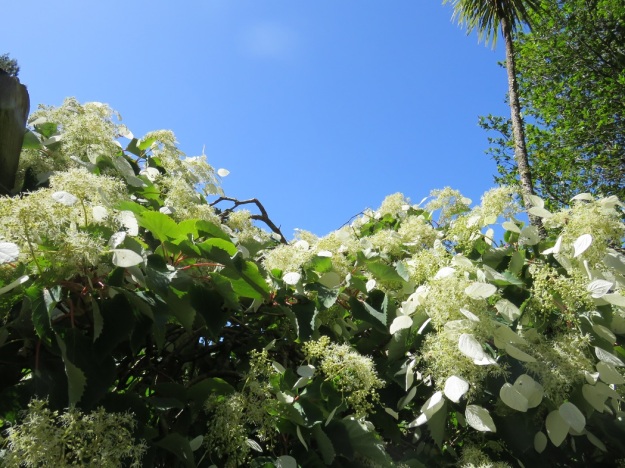 Plantspeople and those with refined visual sensibilities will pick the difference. I prefer the lighter, more ethereal look of the schizophragma. But overall, I concluded that Mark’s ‘man on a galloping horse’ analogy applies. A man (or woman, presumably) passing on a galloping horse would not pick the difference. To be honest, most gardeners wouldn’t either. They are both lovely at their peak and well behaved as far as climbers go. 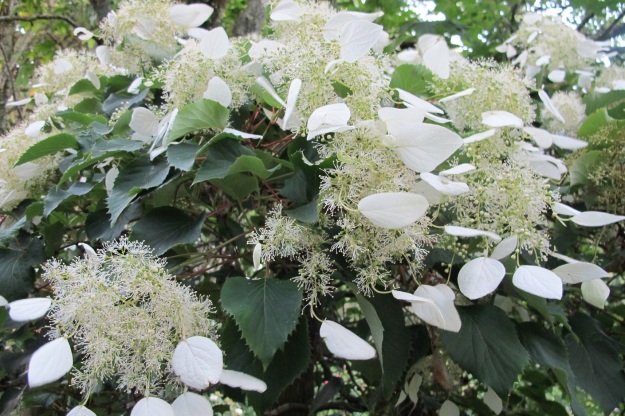 Yes, Schizophragma hydrangeoides  looks like a climbing hydrangea but it is not the common climber which is Hydrangea petiolaris. This one comes from Japan and we prefer it to the usual form despite its difficult name. It is a close relative and a member of the same family but one step further back on the plant hierarchy from species to genus to family. Planted side by side, the schizophragma (pronounced skitsofragma or shyzofragma, whichever you prefer) is more floriferous and has significantly larger flower heads which seem to dance on the vine. This may be because its larger, winged petals (technically bracts, not petals) are held singly whereas H. petiolaris has its smaller bracts grouped in four, like a little flower all on its own.  The schizophrama is self-clinging and relatively slow growing so it doesn’t take over and swamp neighbouring plants. It needs something to climb up, however. If left to ramble at ground level, it doesn’t seem to flower though it does layer its way along so you can get more plants from it by this strategy. 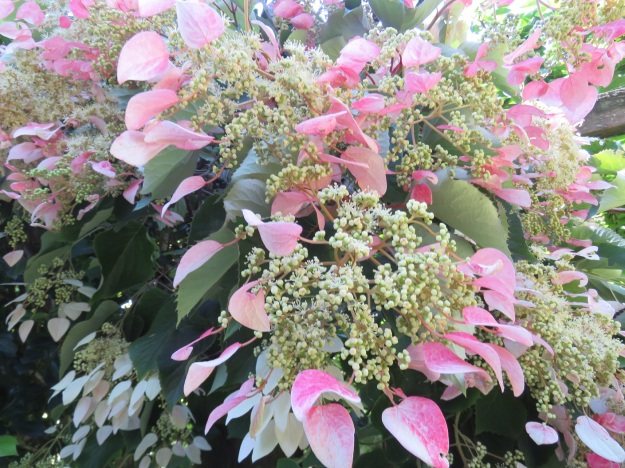 The pink form is even more unusual. This fact was often not appreciated in the days when we used to sell plants. I recall too many customers who were at best ABP – Anything But Pink, at worst IOBW – I Only Buy White (flowers). Such self-imposed rules can certainly limit appreciation.

Schizophragma are hardy and deciduous so, to all intents and purposes, they fill an identical niche to H. petiolaris. However, petiolaris seems to perform better overseas where it is more floriferous and even gives autumn colour. Talking to our friend and colleague, hydrangea expert Glyn Church, we agreed that it is likely that petiolaris prefers a colder winter than we have, whereas the schizophragmas are perfectly happy in our conditions. As with lacecap hydrangeas, the winged ‘petals’ or bracts are the showy part whereas the proper flowers are the small, less spectacular bits behind the bracts. 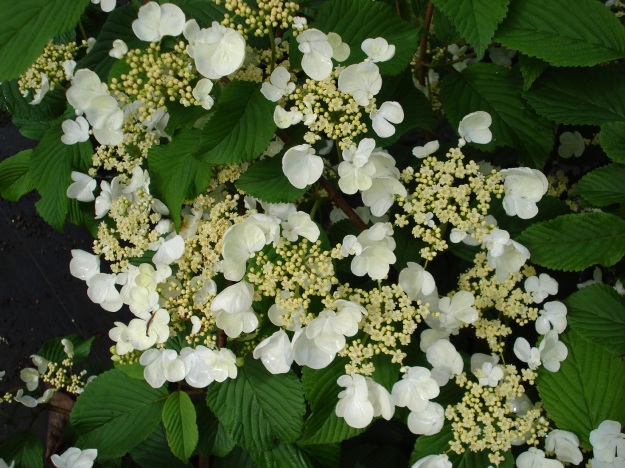 For the purpose of comparison – Hydrangea petiolaris