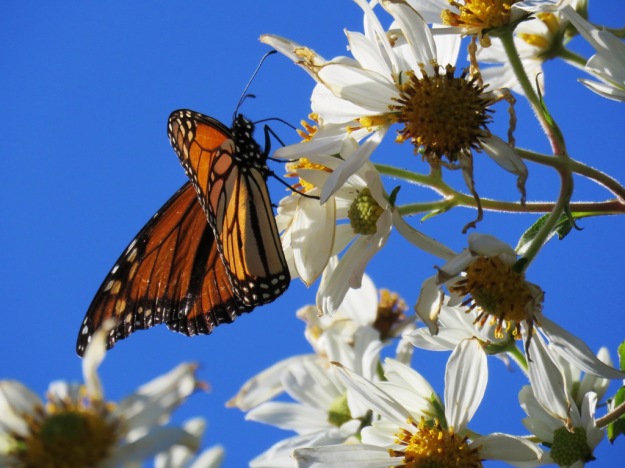 I have a new camera and while I am still learning to use it, I doubt that I could have captured the monarchs on the montanoa with my old one, even before it decided to shuffle off the mortal coils and go where digital cameras go to die. I mentioned the Mexican tree daisy last week, asking for identification. Such are the wonders of the internet, it took less than 20 minutes for the botanical name to be supplied to me – Montanoa bipinnatifida. I am attempting to commit this to memory, although I keep getting sidetracked onto bipolar manatees which won’t do at all.

It was a comment left on this site that had me heading down to check out the montanoa on a sunny mid-winter’s day, to find it positively dancing with monarch butterflies. “It’s a natural food source for monarch butterflies, as it also comes from Mexico”, the reader said. Given that monarchs are recorded as self-introducing to this country around 1840 and generally produce two generations a year, that means at least 350 generations have passed since the Mexican connection so I think the montanoa is perhaps better described as being an “indigenous food source for monarch butterflies in Mexico”. But a source of winter nectar, it certainly is. It was a joy to see.

The felling of the Waitara riverside pohutukawa yesterday – the ones that we had fought so hard to save – followed by heavy rain today have thwarted my plans to complete the clean-up on the second block of large Kurume azaleas that I also mentioned last week. But as I hauled away multiple barrow-loads of prunings, it occurred to me that the spending of maybe two weeks’ sustained work to complete a task that nobody else (other than Mark) will even notice has been done, represents fairly high level gardening skills. For much has actually been done. It is greatly improved but there is little evidence to show that.

From the point of view of the gardener, the hard hack and slash approach may be more rewarding in the short term – you can see exactly what you have done and it is a quick result. But as far as the garden goes, a gentler technique which leaves the overall scene refined but visually similar, masking how much has been taken out, is a different skill set. There is “cutting back” and then there is what I have heard called “blind pruning” – which is cutting back without leaving a visible trail of destruction. It takes more time and skill but is worth the effort for intensively managed areas of the garden. 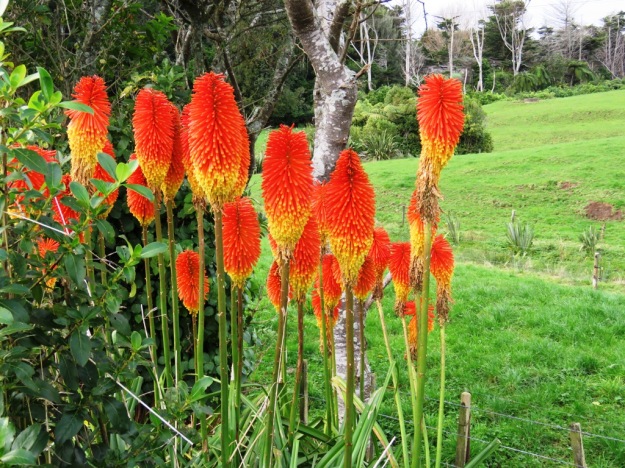 I was so discouraged when I left the scene of institutional and bureaucratic vandalism that was the Waitara pohutukawa that I had to take refuge in scenes of nature that are beyond the reach of the desecrators. I have been enjoying the sight of red hot pokers (kniphofia) on the road verges. Just an African plant that has adapted to its role as a roadside wild flower in New Zealand – a bright splash of colour in the gloom.

And at home I raised my eyes upwards to drink in the sights of our trees. We have many large trees here, evergreen and deciduous, native and introduced. While by no means the largest of our trees, this scene of magnolias, silver birch and Queen Palm (Syagrus romanzoffiana) soothed my soul.